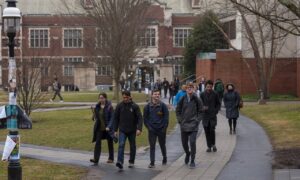 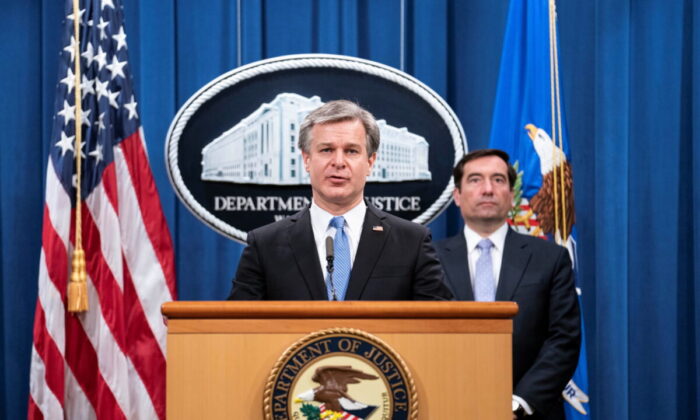 FBI Director Christopher Wray speaks during a press conference at the Department of Justice in Washington on Oct. 28, 2020. (Sarah Silbiger/Pool via Reuters)
Thinking About China

Two years ago, U.S.-China relations started to deteriorate significantly. The Chinese Communist Party (CCP) has always blamed former President Donald Trump for the deterioration, especially on topics such as the cold war and U.S.-China friendship. There is one issue, however, that the CCP has never mentioned: the dispute over China stealing U.S. technology secrets.

Intellectual property (IP) theft is the one topic that the CCP is most unwilling to talk about, and it is the main issue that highlights the complexity in U.S.-China relations.

The Core Issue Is the CCP’s Theft of Technology Secrets, Not the Trade War

China has a long history of stealing U.S. technology secrets. This is not a “competition” between powers as President Joe Biden suggests, but a deliberate and serious violation of U.S. intellectual property rights (IPR) by the CCP. This was evident and worsened during the Obama era. Beijing even incorporated such thefts, including the Thousand Talents Program, into its strategies for China’s economic rise and world dominance.

Trump responded to these thefts and signed a memorandum on March 22, 2018, accusing the Chinese regime of “unauthorized access to intellectual property, trade secrets, or confidential business information,” authorizing the U.S. trade representative to implement tariffs under section 301 of the Trade Act of 1974 “to address China’s unfair trade practices.” Subsequently, Trump placed the U.S.-China economic and trade dispute on the negotiating table, with trade deficits and IPR being the focus of Washington in bargaining with Beijing.

The Trump administration’s core concern in the economic and trade negotiations was not simply the trade deficit. It wanted to use trade issues as leverage to force the CCP to stop infringing on U.S. IPR, and tariffs were only a means to complement the negotiations.

The CCP Triggers Cold War With US

At the beginning of the 2018 U.S.-China trade talks, the CCP said it could negotiate with the United States on both trade and IPR, but in fact, it was unwilling to budge on either, and Beijing was coaxing and pestering the Trump administration at the negotiating table.

During the lengthy negotiations, the CCP negated all the accusations entirely. Obviously, the CCP would rather bear high U.S. tariffs than actually end its IPR infringement activities; at the same time, the CCP has been confining the U.S.-China trade negotiations to trade as much as possible, hoping to use trade concessions to divert U.S. attention from the CCP’s theft of technology secrets.

For the CCP, the U.S.-China trade talks could only be a “trade war,” and if the talks went beyond trade and investment issues, they would have touched China’s red line, which was the issue of technological espionage. For the Trump administration, theft of IPR must be dealt with and violators must be prosecuted. As a result, no progress could be made in the negotiations between the two sides.

In early 2019, as the economic and trade outlook for the United States and China was uncertain, some foreign companies began to pull out of China, and China’s economic situation was deteriorating. The Communist regime, fearing that it would lose the initiative, took three military threats against the United States in 2019.

These three actions were: in January, the Chinese naval fleet went to Midway Island for drills, claiming to “target Pearl Harbor”; in March, the CCP announced that it had taken over most of the international waters in the South China Sea and established a “deep-sea fortress” for Chinese nuclear submarines that could threaten the United States; and in June, the CCP announced that it had completed the deployment of BeiDou Navigation Satellite System (BDS) for nuclear missile navigation, which rivals the U.S. GPS system.

Regardless of what plans the CCP might have had and whether they anticipated the outbreak of the cold war or underestimated the Trump administration’s determination to defend U.S. national security, the CCP’s military threat undoubtedly strained Sino-U.S. relations. This ignited the cold war and changed the course economic and trade negotiations. It is no longer possible to return to the old track of cooperation and development between the two countries.

Since the 1980s, the developed countries, represented by the United States, have gradually changed to an economy in which growth is driven by IP and innovation. Under such circumstances, protecting the country’s IPRs from theft is not only the basic prerequisite for maintaining employment and corporate profits but also the only way to protect the wealth of IPRs. Hence, China’s attempt to seize the IPRs of others is tantamount to robbery of IP revenues (profits) of developed countries and their IP wealth. This has led to economic and trade negotiations between the United States and China that focus on IP theft.

The damage to the U.S. companies is huge as they suffer from loss of revenue and will not have enough funding for their R&D investment, and possibly face long-term bankruptcy from Chinese counterfeits.

According to the Report of the Commission on the Theft of American Intellectual Property (also known as the IP Commission Report), “the annual cost to the U.S. economy continues to exceed $225 billion in [CCP’s] counterfeit goods, pirated software, and theft of trade secrets and could be as high as $600 billion,” of which, “the economic impact of trade secret theft on the U.S. economy in 2015 is estimated to be between $180 billion and $540 billion.”

“China does not just steal the most American IP of any country; it targets the sectors at the forefront of innovation that could create the best jobs for Americans in the 21st century,” the report says.

FBI Director Christopher Wray, at the Council on Foreign Relations in Washington on April 26, 2019, described China’s IP theft as “a societal approach” and said that the regime did it in “any way it can, from a wide array of businesses, universities, and organizations.” He pointed out that the CCP’s intelligence services “strategically use every tool at their disposal—including state-owned businesses, students, researchers, and ostensibly private companies—to systematically steal information and intellectual property,” and that “the FBI has China-related economic espionage investigations in nearly all of its 56 field offices and in nearly every industry.”

It’s noteworthy that on April 26, 2019, Beijing’s official overseas propaganda outlet DW News reported on Wray’s remarks, translating his phrase “societal approach” into a Chinese phrase “quan min jie dao,” which literally means “whole-nation theft.” It is yet unclear whether the media’s intent was to provoke anger or stir nationalistic sentiment among overseas Chinese against the United States or to be complacent about the success of the theft.

When the CCP demonstrates its military power, it constantly brags about how large its naval fleet is. Can the regime’s technological research and development capabilities really support the expansion of its military and the rise of its economy?

The reason for the tremendous growth is that, through concentrated investment in digital industries, the United States has developed an industrial structure in which profits are generated by intangible assets such as IP.

The intangible assets of Japanese companies were about 50 trillion yen, accounting for 6.4 percent of total assets.

Nikkei did not say what this percentage is in China; most likely, it is only a fraction of what it is in Japan.

Is it not possible for Chinese enterprises to take the road of independent R&D? To develop technology independently is not that easy. The question is not whether the regime propagates on this, but whether Chinese enterprises have the original impetus for technology research and development. The only reliable guarantee of IP revenue is a system to maintain the originality, and the most crucial element is the security of the innovation results.

If there is no system to protect the safety of innovation results, and any innovation may be arbitrarily plagiarized by other enterprises, then who is willing to invest a lot in R&D and end up with no return on the investment?

Recently, Biden has been seeking a meeting with Xi Jinping, for which the issues of the CCP’s theft of technology secrets and its military threats to the United States have been suppressed to pave the way for the U.S.-China summit talks.

Although Chinese spies in the United States are not as active as they once were, they have not ceased their activities, and U.S. technology secrets continue to be exported to China. This long history of technology theft has created a chain of interests in the United States, and has also created vested interests groups associated with this chain that often criticize FBI investigations and court decisions in the name of academic freedom and international research cooperation.

The Chinese regime’s theft of U.S. technology and military threat should not be taken lightly by the Biden administration. Why do so many U.S. media outlets and experts avoid or skirt around the issue of technology and economic espionage? This is no doubt a cause for concern for the American public.