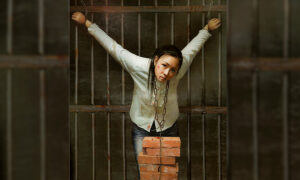 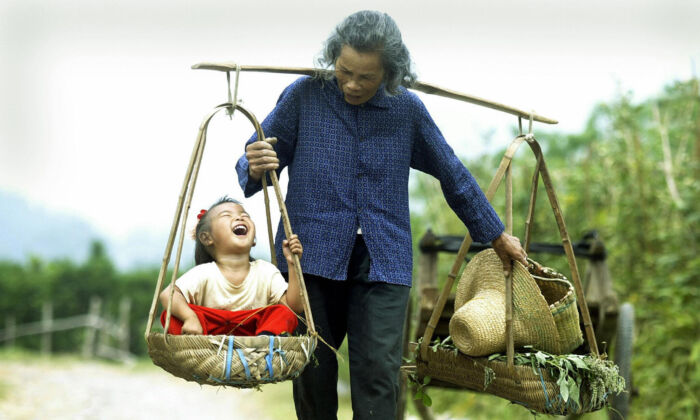 A grandmother carries her laughing grand-daugher outside the tourist mecca of Yangshou, in southern China’s Guangxi Province on Oct. 1, 2003. (Peter Parks/AFP via Getty Images)
Thinking About China 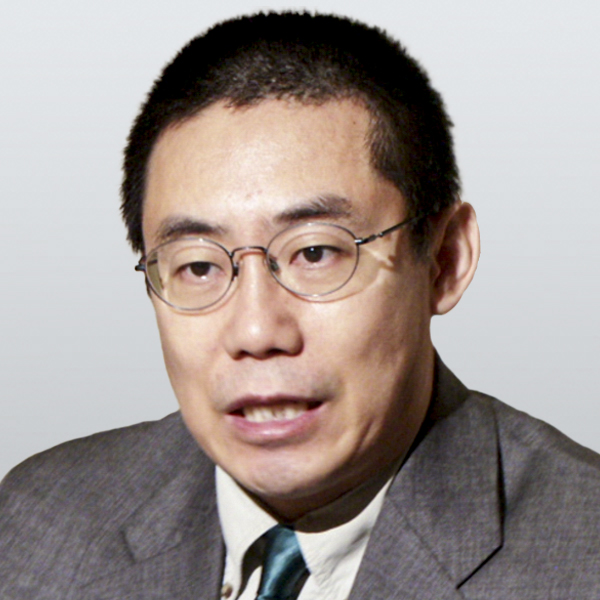 “Communist” is synonymous with “liar” and the history of the Chinese Communist Party (CCP) is the prime collective of liars and lies. This article will recount ten major incidents that lay bare the historical truth behind the CCP’s shams.

The May Fourth Movement

The CCP has long touted the May Fourth Movement in 1919. The movement paved the way for its tyranny.

Hu Shih, a contemporary scholar and educator, regarded the movement as the Chinese Renaissance that could enlighten the Chinese to adopt the Western notion of democracy. But Chen Duxiu, the founder of the CCP, turned cultural enlightenment into a political movement, preaching Soviet Russian communism under the guise of anti-imperialism and anti-feudalism.

Hu Shih, to oppose the Soviet-Russian path, proposed a theory of “more study of problems, less talk of ‘Isms.’” Yet, the CCP was founded two years after the movement and Chen became CCP’s first General Secretary.

The CCP claimed, “In 1927, Chiang Kaishek (chairman of the Kuomintang (KMT) and President of the Republic of China (ROC)), staged a coup purging numerous communists.” Chiang was denounced by the CCP for holding back historical progress.

In fact, Chiang Kaishek knew of the CCP’s violence and its attempt to establish tyranny.

The KMT Central Committee was heavily infiltrated, and a large number of CCP members accounted for a majority of KMT members. While the CCP’s armed forces were causing widespread red terror and violence in Shanghai and many other places, Chiang Kaishek acted decisively to crack down on the communist bandits, preventing the CCP’s early seizure of power.

The April 12 Coup, as the CCP called it, was actually an anti-communist revolution—Chiang Kaishek’s historical achievement. The purge brought stability to China’s social order, and China was able to escape being a victim of Soviet Russia at that time.

We had a 3-hour talk in his New York residence along with other fellow villagers from Northeast China. He made it clear that abandoning three Northeastern provinces of China to the invading Japanese troops during the September 18 Incident of 1931 (also known as the Mukden Incident) was not approved by Chiang Kaishek but was his own decision.

However, Zhang dared not to disclose the truth about the 1936 Xi’an Incident: He abducted Chiang Kaishek for his personal quest for power, establishing a Northwest coalition government headed by himself with support from Mao Zedong, chairman of the CCP, Zhou Enlai, vice chairman of the CCP, and Yang Hucheng, a warlord in Northwest China, under the guise of resisting Japan.

Stalin was concerned that without Chiang Kaishek, China would split and trigger a civil war, which would give the Japanese a chance to attack the Soviet Union. He demanded Mao and Zhou, who needed Stalin’s support against the KMT, release Chiang.

Three adverse consequences ensued from the Xi’an Incident: First, the crackdown on the Communist Party halted—the red army not only survived but was incorporated into the National Government system with military allowances; second, the Xi’an Incident prompted the Japanese to bring forward the full-scale invasion of China, exacerbating the difficulty for China to counter the invasion because of a lack of adequate preparations; third, the incident allowed the CCP to gain strength and eventually seize power from KMT.

The CCP would have been nipped in the bud if there had been no Xi’an Incident, which, however, was manipulated by Zhang Xueliang to change the course of Chinese history.

The Civil War Between KMT and CCP

It was clearly a war to counter the CCP’s violent seizure of power.

The so-called China hands of the U.S. government suggested the KMT and the CCP establish a coalition government like the two parties in the United States, which restrained Chiang Kaishek’s anti-communist efforts. While Stalin, by contrast, fully supported the CCP with armaments so that the CCP could fight all the way from Northeast China to Hainan Island.

The external factor that led to the success of the CCP’s seizure of power was the United States not fully supporting Chiang and Soviet Russia’s support of the CCP.

The CCP’s Agricultural Production Cooperatives Campaign launched shortly after its inception, was a sham.

The CCP, in order to have a constant source of troops to defeat the KMT, provided land to the peasants in exchange for their children to join its army under the banner of “an attack on the despotic landowners and the distribution of their land to the poor peasants.”

After defeating the KMT, the CCP immediately nationalized the land with the Agricultural Production Cooperatives Campaign, turning the land into the CCP’s property.

The Anti-Rightist Movement in 1956 was the suppression of free speech.

Frankly speaking, it is not an issue of the scale of the movement, but the brutalities of the CCP to stifle thoughts and suppress freedom of speech.

The Great Famine was a sham falsely labeled as a “natural disaster” by the CCP.

Amid the twelve months that saw the worst famine with the highest number of people dying of starvation since the 1961 Great Famine, records from China’s Ministry of Food showed that there were still 44.4 billion pounds of crops in stock, which equaled to annual food rations for 140 million people at the time.

A great number of people would not have starved to death if the CCP had used the most common famine relief measure in Chinese history—distributing the stored crops—even if it was half of the stock.

However, Mao Zedong believed that the peasants were deceived by enemies of the people and refused to submit their crops.

He did not distribute the crops, instead, he searched for more and prevented the peasants from escaping the famine, using atrocious means. As many as 2.7 million people were shot and tortured to death. In Xinyang, Henan province alone, 67,000 people were killed by bricks.

According to research by foreign scholars, back then, as many as 45 million people in China starved to death and the same figure was calculated by the CCP scholars from the birth and death rate of the population. This is the worst mass massacre caused by the CCP’s policies.

Liu Shaoqi, then-chairman of the CCP, claimed that 30 percent of the Great Famine was caused by natural disasters, and 70 percent of it was man-made.

In fact, the Great Famine was a 100 percent man-made catastrophe.

This is a man-made catastrophe was instigated by Mao, involving issues of thought, culture, and life.

According to official Chinese reports, over 2 million people were killed, over 7.03 million were maimed, and 71,200 families were destroyed amidst the Cultural Revolution.

Former CCP General Secretary Hu Yaobang said to a foreign reporter, “At that time, nearly one hundred million people were implicated, which was one-tenth of the Chinese population.”

However, the present CCP leader Xi Jinping has been propagating the Cultural Revolution in recent years, paving the way for himself to be a Maoist dictator.

CCP authorities have continued to re-classify the Tiananmen Square massacre, first calling it a “counter-revolutionary riot,” before downplaying it to a “turmoil,” then renaming it as an “incident,” and then a “crisis,” before now finally just calling it “that thing.”

The CCP has been keeping a low profile each time it redefined the massacre, indicating that it has been downplaying the massacre and cannot justify itself.

According to a secret British diplomatic cable, at least 10,000 people were killed by a Chinese army unit in the massacre.

The 30-plus years of censorship on the Tiananmen Square Massacre has brainwashed the Chinese into thinking that no such massacre occurred and now younger generations cast doubt about it.

Essentially, the CCP’s brainwashing the Chinese amounts to crushing their spirit before killing them.

The Persecution of Falun Gong

When Qigong (a form of spiritual practice) emerged in China in the early 1990s, Falun Gong came into being and flourished rapidly. However, it was soon suppressed by the CCP for three main reasons.

First, the founder, Li Hongzhi, disagreed on establishing a party branch administered by the CCP within Falun Gong and thus annoyed the authorities; second, the traditional Chinese values including truthfulness, compassion, and tolerance practiced by Falun Gong adheres to theism and clashes with communist atheism; third, in April 1999, more than 10,000 Falun Gong practitioners peacefully petitioned at the National Public Complaints and Proposals Administration (also known as Xinfang Bureau) in Beijing, sparking the CCP’s fear of mass gatherings.

The CCP is intolerant to a large number of people assembling at official institutions.

China has become the world’s largest country of organ transplants despite the increasing exposure by international media of the CCP’s illegal organ harvesting from Falun Gong adherents. The CCP is evil to the core.

It’s manipulating the CCP virus to attack the globe, infecting over 181 million people and claiming 3.93 million lives. Many studies and evidence have pointed to the virus being leaked from a Wuhan laboratory, and it is likely a biological weapon developed by the CCP’s army.

With 100 years of brutality the communists have brought to mankind, the world needs to learn through history to defeat the true cult of the universe.

Cao Changqing, a journalist and columnist, has long been a guest speaker in many Chinese language media such as FTV, Voice of America, NTD, Radio Free Asia, etc.

Cao Changqing
Follow
Cao Changqing, a journalist and columnist, has long been a guest speaker in many Chinese language media such as FTV, Voice of America, NTD, Radio Free Asia, etc.
TOP NEWS