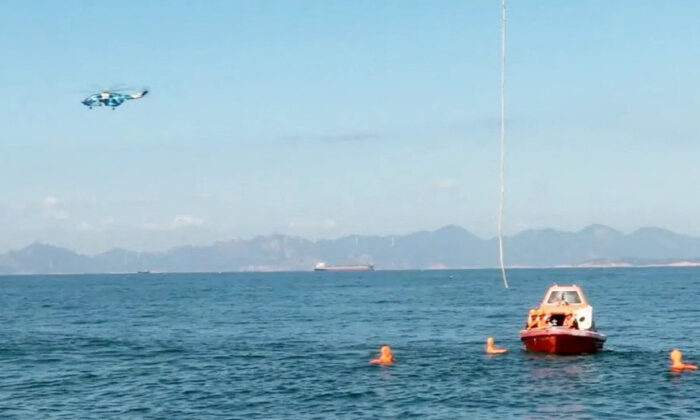 U.S. House Speaker Nancy Pelosi’s trip to Taiwan provided the Chinese Communist Party (CCP) an apt opportunity to showcase its two-pronged approach toward the island state: coercion and deception. The coercive arm is the military drill following the visit, while the deceptive hand is the white paper issued after the drill.

Shortly after Pelosi’s departure, the CCP launched an intimidating military exercise intended to create a “new normal” for Taiwan. This “new normal,” according to Chinese military analysts, includes several aspects.

First, the imaginary “middle line” separating China and Taiwan’s sea and air space, tacitly observed by both since the early 1950s, will no longer be respected by China. Henceforth, CCP planes and ships could approach or cross the “middle line” at will, and Taiwan would be forced to intercept them. China’s overwhelming size amounts to a war of attrition that would wear the Taiwanese military down, undermining its capability physically and psychologically.

Second, the territorial waters of Taiwan will no longer be honored. In the drills, one of the targeted areas was deliberately set close to Taiwan’s 12-nautical mile sea boundary. Never has a drill been so provocative.

Third, for the first time, missiles were hauled across the island. At least two such missiles flew over Taipei to hit targets in the Pacific Ocean east of Taiwan. Although technically, the missile flew in outer space too high for Taiwan to claim as its air space, the CCP demonstrated its intention and ability to do whatever it likes regardless of the consequences.

Fourth, for the first time, CCP missiles also hit areas claimed by Japan as part of its exclusive economic zone. This is deliberate and meant to warn Japan not to meddle in cross-strait affairs.

Last, the entire exercise is meant to blockade the island for the first time. A military analyst admitted that a blockade would be used to strangle the island to weaken and impoverish it, as well as to create fear and uncertainty and stir up instability from within.

At the end of the drill, a CCP military official announced that all these new measures would be routinized and that the People’s Liberation Army would assume military patrol of the waters near Taiwan. This amounted to claiming the Taiwan Straits as China’s inner sea.

This “new normal” was planned a long time ago but it was shelved until Pelosi’s visit provided the excuse needed.

After coercion comes deception. When the military drill ended, the CCP extended an “olive branch” to lure Taiwan into unification with the mainland.

The CCP’s white paper, titled “The Taiwan Question and China’s Reunification in the New Era,” listed several items of how unification could benefit the Taiwanese.

This is the third white paper after the 1993 and the 2000 ones, representing Chinese leader Xi Jinping’s strategy for absorbing Taiwan. In all the three white papers, the core strategy was the “one country, two systems” model, an idea proposed by the late patriarch leader Deng Xiaoping in the early 1980s. The model, formulated with Taiwan in mind, was first implemented in Hong Kong.

Compared with the previous two, Xi’s version is a marked departure from the original formulation of “one country, two systems.” Whereas the last two allowed Taiwan to keep its army after unification, this provision is deleted in Xi’s version.

Whereas the previous two pledged that after unification, Taiwan would be able to keep its political structure intact, retain foreign affairs authority, and Beijing would not send any of its people to run Taiwan. Such a pledge was absent in the latest version.

Xi’s white paper outlines in detail that after reunification, foreign countries can continue to develop economic and cultural relations with Taiwan. With the approval of the Central Government of China (controlled by the CCP), Beijing may set up consular offices or other official or parastatal institutions in Taiwan, and international organizations may set up offices there. Taiwan could be a party to some international treaties where statehood is not required, and relevant international conferences may be held there.

It is clear from these statements that the Taiwan Special Administrative Region envisaged by Xi no longer has an army, no longer enjoys foreign affairs authority, and no longer maintains the five branches of power existing in Taiwan. What Taiwan gets is no more than what was promised to Hong Kong.

In Xi’s white paper, all the nice words entice Taiwan. These words are déjà vu to anyone who witnessed how Hong Kong was enticed to accept the “one country, two systems” model. These benign words were meant to ensure stability during the transition period to 1997. Once sovereignty was resumed, the nice promises were reneged one by one, culminating in the passage of the national security law in 2020 that virtually destroyed the entire civil society of Hong Kong. Any Hongkonger reading Xi’s white paper will immediately point out that it’s deceptive.

The CCP’s coercion and deception strategy will never succeed in winning over the hearts and minds of the Taiwanese.