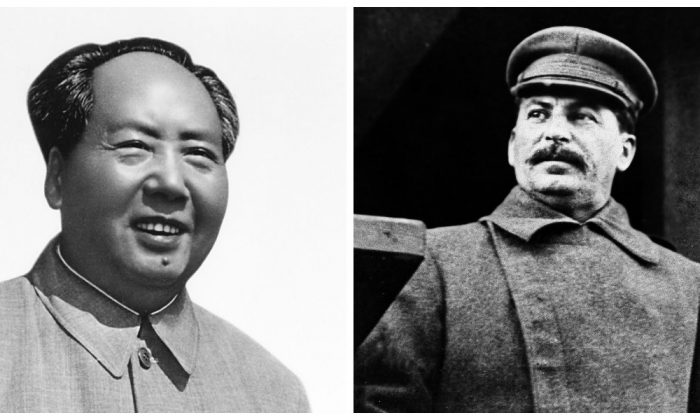 It attracted numerous “likes” but was removed soon after posting.

This post neatly summarized the conflict of interests between the CCP and the Chinese people. Thus, the CCP’s support for the Russian invasion goes against Chinese interests.

Russia’s rationale for the invasion—the so-called “principle of indivisibility of security”—is a déjà vu for China, which experienced a similar dismemberment by Russia in 1945, using the same argument to incite Outer Mongolia to break away from China.

The Chinese people learned by bitter experience that Russia is their greatest threat. As early as 1850, Lin Zexu, a Qing Dynasty official, had already predicted this.

Lin was responsible for confiscating the opium brought into China by the British merchants—arguably the first anti-narcotics movement in modern times, resulting in the First Opium War (1839–1842). Opium caused serious health problems among the Chinese.

Before his death in 1850, Lin edited an almanac (called “Si Zhou Zhi” in Chinese), in which he traced the rise of Russia. He said unequivocally that “of all the powers, Russia would be the greatest threat to China. I am too old to see it, but future generations would witness it.”

He was right. Between 1858 and 1911, Czarist Russia, through a series of unequal treaties forced upon the ailing Qing Dynasty, annexed approximately 1.5 million square kilometers of land from China.

When CCP leader Deng Xiaoping met Soviet leader Mikhail Gorbachev in 1989 to normalize bilateral relations, Deng lamented that historically, among all the powers that bullied China, Russia inflicted the most harm and obtained the most benefit, seizing 1.5 million square kilometers of land (see “Selected Works of Deng Xiaoping,” Volume 3).

Thus, history shows that Russia is the greatest foe for the ordinary Chinese people. However, the CCP, out of self-interest, considers it a friend.

The CCP had its umbilical cord tied to Russia. The former Soviet Union set it up as a front of the Third (Communist) International, Moscow’s tool for spreading communism worldwide.

In the CCP’s Declaration of the Second Congress (1922), it was clearly laid down that “the CCP is a branch of the Communist International.” A declassified Soviet document contained detailed records of how Moscow financed CCP activities in China. Between 1921 and 1943, the CCP’s budget, resolutions, and top leadership all had to be approved by Moscow.

Since the CCP owed its birth and growth to Russia, it naturally adopted a pro-Russian stance. Whenever Sino-Russian relations were strained between 1921 and 1949, the CCP invariably defended Russia’s interests rather than China’s.

While the central Chinese government tried to mobilize domestic forces in self-defense, the CCP adopted a resolution to “protect the Soviet Union militarily” at its second plenary session of the Central Executive Committee (CEC, equivalent to the present-day politburo of the CCP) of the 6th National Congress in 1929.

Declassified documents showed that the CCP had issued at least five Central Circulars, which were directives issued by the CEC to all Party branches, stressing the need to mobilize all sectors in China to protect the Soviet Union.

According to these circulars, one way to protect the Soviet Union was to stage military uprisings in all parts of China to weaken the central government’s war effort against Soviet invasion. This is outright treason.

Stalin also forced China to grant independence to Outer Mongolia, which became present-day Mongolia, based on the excuse that Russia needed a buffer zone against future expansion of Japanese and American influences into the Asian heartland.

This argument for a buffer zone resembled the so-called “principle of indivisible security” rationale in its modern-day invasion of Ukraine. Beijing shamelessly supported the same principle that had allowed Russia to carve out a big chunk of territory from China.

The heavy-handed approach by Stalin was well documented in former Taiwanese President Chiang Ching-kuo’s memoir, who had taken part in the negotiation with Russia, and in a series of declassified Soviet documents compiled by Fudan University professor Shen Zhihua in his “A Selection of Russian Declassified Document (1945-1949).”

In Russia’s blatant attempt to split China, the CCP lent full support to Moscow. According to a Soviet declassified document, between June 18 and August 19, 1945, Stalin and CCP leader Mao Zedong had exchanged cables five times, in which Mao pledged full support to the Soviet Union’s plan to carve out Mongolia. These cables were documented in “A Chronicle of Stalin” and “Selected Writings of Stalin,” both published by the People’s Publishing House in 1982 and 1979, respectively.

So historically, Russia is a foe rather than a friend. In comparison, the United States has not seized an inch of land from China. The only time it invaded China was during the Boxer Uprising in 1900, along with seven other European countries. It took the lead to use the Boxer indemnity to help build China’s modern university education and founded the present-day prestigious Qing Hua University.

During the Second World War, the United States helped China during the Japanese invasion. In the late 1960s, when Sino-Soviet relations were extremely tense and Russia threatened to use nuclear weapons against China, the United States provided its intelligence to Beijing and helped mitigate the Soviet threat.

After Mao’s death, when China decided to open its door, the United States readily embraced it. China was admitted into the World Trade Organization, which was instrumental in spurring the Chinese economy to become the world’s second-largest.

History shows clearly who is a friend and who is a foe. Yet the CCP forged a completely distorted friend-foe perception. It considered the United States, which is a friend to the Chinese people, as its arch-enemy because the democratic values advocated by America are detrimental to the CCP’s totalitarian rule. Thus, the CCP considers the United States an ultimate threat to its power, hence the greatest foe.