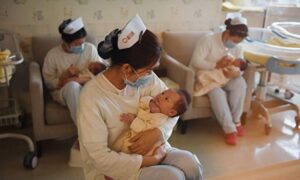 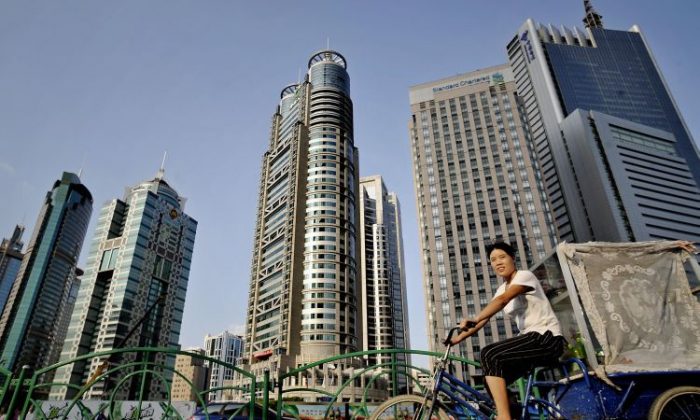 The skyline of Pudong, the financial district of Shanghai, China, in this undated photo. (Philippe Lopez/AFP/Getty Images)
Thinking About China

Xi Jinping’s investigation of financial institutions in China, and their alleged chumminess with the largest private firms, will increase his political power, but harm the country’s economic growth.

After targeting the media, education, gaming, and technology sectors in China, and wiping out billions of dollars in the process, the Chinese Communist Party (CCP) is now girding itself against China’s financial firms.

According to a Wall Street Journal exclusive by Lingling Wei, Xi “is zeroing in on the ties that China’s state banks and other financial stalwarts have developed with big private-sector players, expanding his push to curb capitalist forces in the economy.”

Star investor Catherine Wood of Ark Invest warned on Oct. 12 of a coming economic downturn in China that is becoming increasingly obvious. Such a downturn could ripple through the world economy, weighing on commodities, she warned.

“I really do think that the policy makers in China are beginning to play with fire,” Wood said. “We will look back at this period in six months and say, ‘Wasn’t it obvious there will be a major and unexpected slowdown in China?’”

Xi is launching major inspections, announced in September, of 25 state financial institutions that are central to China’s economy.

According to the Journal’s sources, the inspections will focus on the allegedly too-chummy relationships between state-owned banks, financial regulators, and investment funds, and the biggest private firms, especially those that the CCP has already targeted, including China Evergrande Group, Didi Global Inc., and Ant Group.

While money from state banks has helped these groups beat foreign rivals, Xi is apparently still suspicious of the way in which the investments have pushed forward powerful rivals in the form of popular Chinese billionaires who are sometimes seen as too critical of the state, or too much of a risk to Xi.

“Do those investments represent the state’s interests or those of a few individuals?” one of the Journal’s sources said. “That’s a key question.”

Targeting companies that have already run afoul of Beijing, or in the case of Evergrande, of the market, risks the appearance of biased enforcement of the law and a failure to apply governing principles in advance to mitigate risk, rather than afterwards to compound failure.

The confused approach of Xi to wanting both market principles that improve growth, while at the same time targeting capitalism by name and promoting failed communist principles, will only frighten away investors and worsen China’s lackluster economy on a per capita basis, compared to Japan, South Korea, and Taiwan.

The Journal’s sources have said that starting this month, the Central Commission for Discipline Inspection will be rifling through the files of the 25 state institutions, and asking tough questions about their investments, lending, and regulatory compliance, especially with respect to the targeted private firms.

But there is also a political component. The head of Xi’s anticorruption body said on Sept. 26 that the inspectors will “thoroughly search for any political deviations.”

“The financial-sector scrutiny comes as Beijing is also trying to address the economy’s dependence on debt-fueled construction sprees, which is prompting turmoil in China’s property sector,” according to Lingling at the Journal. “By expanding his economic campaign, Mr. Xi risks unleashing dynamics that could severely cut into growth in coming months.”

She added, “One risk for Mr. Xi and China is that such broad scrutiny could make the country’s financial system even less accessible for smaller private companies already struggling with a lack of financing.”

Lingling quoted analysts who say that many banks have begun decreasing lending to private firms in response. This will lock up capital and decrease China’s much-vaunted levels of economic growth, albeit growth that is often girded through the building of ghost cities.

Xi would like us to believe that his goals are to protect China from its largest private firms that seek to “capture” the state’s financial sector, thus decreasing the Party’s influence and control over the economy. He wants us to believe that by targeting some of the biggest failing firms, the investigators will minimize the moral hazard of frequent bailouts.

The likelihood of more defaults in China’s $5 trillion property sector is increasing worries among global investors of debt contagion to other sectors, sending interest rate spreads of some high yield Chinese corporate debt to over 23 percent on Oct. 12.

According to a Capital Economics note, “Even following an orderly restructuring of the worst-affected developers with minimal contagion to the financial system, construction activity would still almost inevitably slow much further.”

“They want to scare the market as a way of eliminating moral hazard,” Michael Pettis, a financial expert at Peking University, told the Financial Times. “Evergrande has the risk of spiralling out of control because people are changing their behaviour to protect themselves, which is perfectly rational. But as people do that systematically, it’s really self-reinforcing and makes things worse,” he said.

Targeting the financial sector in China is also a means for Xi to undermine political rivals, including through further crumbling the power base of Wang Qishan, who holds the largely ceremonial office of Vice President. Two of Wang’s close associates have hit hard times recently, with his longtime aide Dong Hong charged with accepting over $71 million in bribes, and another former aide, HNA Group Chairman Chen Feng, declaring bankruptcy last year. In September, HNA disclosed that Chen was detained for alleged criminal offenses.

Xi’s recent targeting of non-state media has also hit Wang, who is allied to the founder of the privately-owned Caixin Media, and Jack Ma’s Alibaba Group Holding, which controls a private media empire that includes shares of Caixin.

“While serving as Mr. Xi’s antigraft czar during the leader’s first term, Mr. Wang largely avoided investigating the financial sector, while he pursued probes into other parts of the economy,” according to Lingling. “But financial risks in China kept building up, in part because of aggressive lending by state banks to some well-connected corporate highfliers.”

Whatever the real reasons for Xi’s targeting of China’s financial sector, the move will almost certainly increase his power on the mainland. Following the playbook of his anti-corruption drive, which started in 2012, Xi can now more thoroughly and selectively investigate and prosecute his billionaire rivals for financial malfeasance. This can only help in his bid for more totalitarian power within China. What it does for his dreams of increased economic growth and more territorial control abroad is less certain. Investors, and the world, should be nervous.