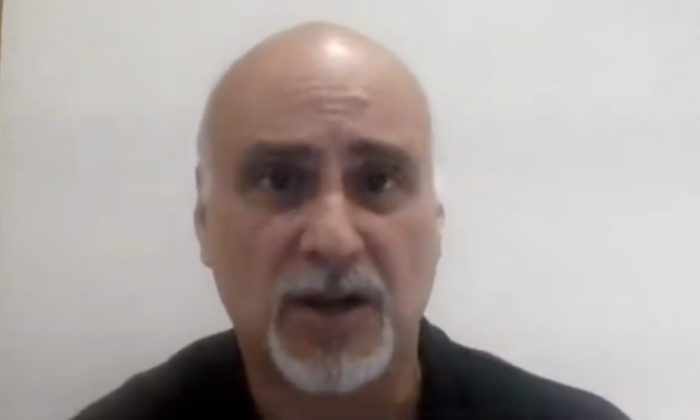 Nicholas Eftimiades, a former U.S. intelligence official, is shown in this screenshot from his interview with NTD's "Capitol Report" on July 1, 2022. (NTD)
Infiltrating the West

The CCP’s Covert Influence in the United States ‘Rather Extraordinary’: Former US Intelligence Official

Former U.S. intelligence official Nicholas Eftimiades, who has over two decades of experience in the field, said the U.S. government must develop a solid strategy and articulate its goals when it comes to the Chinese Communist Party’s (CCP) malign influence at all levels of U.S. government and institutions.

The propaganda disseminated by the CCP in the United States is widespread and obvious, but the CCP’s secret influence is also remarkable, said Eftimiades.

“Even in the covert influence area, it’s amazing how active they are, not only at the federal level, which we’ve seen, but at the state and local levels,” Eftimiades said in a recent interview for NTD’s “Capitol Report” program. “It’s really rather extraordinary.”

These undercover efforts include corporate campaigns, repressing pro-democracy organizations at the state level, and the collection of intelligence about local and national politicians, Eftimiades said.

“It’s like nothing the United States has faced before,” he said.

Eftimiades explained the concept of encirclement, in which the CCP recruits academicians, businesses, politicians, and civic organizations to surround a political target so the CCP can exert influence over the target to benefit the CCP.

The CCP also exerts influence within colleges and universities via the Confucius Institutes, limiting speech and discussion about anything that is not favorable to China, he said.

“If you look, it’s really rather blatant, the Chinese government’s influence on their scholars and students abroad. They keep a very close watch on them, and influence and control them,” said Eftimiades.

They do this by having the Chinese consulate exert tight control over Chinese student associations and scholars attending U.S. academic institutions by giving money to the groups and individuals, he said.

Chinese social media company TikTok, which is used by millions of young people, is also a tool the CCP uses to harness massive amounts of data on users and exercise control, said Eftimiades.

China’s data collection program is a “whole of society campaign,” he said.

“This might seem like a mass amount of data, and really a mass amount of data on young people,” Eftimiades said. “But if you can sift it through artificial intelligence—which China has done phenomenal work in—then it becomes user data that can be used for influence, as well as potentially for espionage.”

The United States must use a multiprong approach to combat the CCP’s malign influence, including reaching out to Chinese scholars and students who are studying here, said Eftimiades.

“Typically, they speak Chinese. They’re very isolated in their own communities,” he said. “It’s not until they engage with the rest of society that their opinions actually go up dramatically on U.S. culture.”