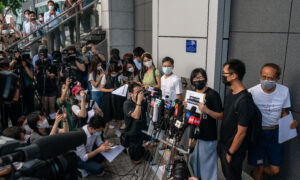 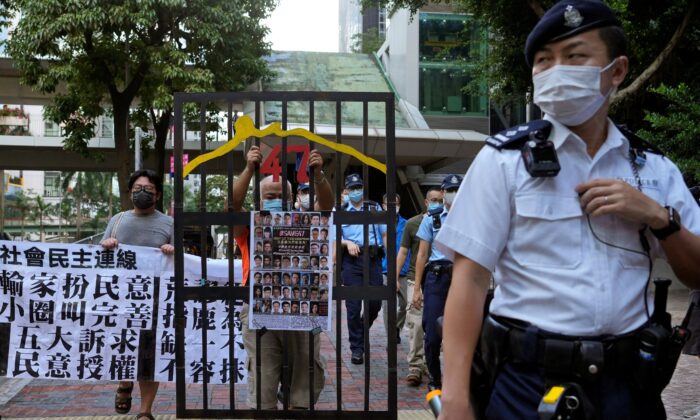 A police officer during a street protest in Hong Kong on Sept. 19, 2021. The protestors were demonstrating against an election committee that will vote for the city’s leader. (Vincent Yu/AP Photo)
Analysis

News of a sham election in Hong Kong indicates the deterioration of democracy in the world’s fragrant harbor, and China’s dumping of pro-tycoon candidates that it no longer needs.

Beijing used to use the tycoons as a counterbalance against pro-democracy candidates, but now that it rejiggered “elections” in its favor, all but one of the elected candidates are pro-Beijing, and there is no more need for the CCP-tycoon coalition. This illustrates a pattern in Chinese Communist Party tactics, that use businesses when convenient, but then discards them when power is acquired. The West and allies should take note, as similar tactics are being used against them in cities as diverse as Washington, Brussels, London, Delhi, and Tokyo.

Beijing is trying to spin the leadership selection process in Hong Kong as democratic. A spokesman of Beijing’s Hong Kong and Macau Affairs Office said on Monday that the election implemented the principle of “patriots governing Hong Kong.” He said that the polling “fully demonstrates the new phenomenon and the new hope that Hong Kong is emerging from chaos and becoming orderly and prosperous.” He added that the new election committee was “better balanced,” “more representative,” and “enhancing the quality of the democracy.”

According to the spokesman, “From the election results, members of the final election committee come from all walks of life, all sectors and all aspects of Hong Kong society. It lays a good foundation for the upcoming elections of the city parliament and the chief executive.”

Hong Kong’s election system constrains the ability of interest groups to self-identify by forcing the election of individuals for particular “subsectors” such as community groups, professions, and associations, including those representing ancestral place of origin on the mainland.

The CCP’s constraints, channeling, and molding of the elections to fit its goals of greater centralized control, under the justification of greater equality, should be seen as parallel to its global tactics and strategy to acquire ever more power through economic and political influence, melded with propaganda and military might.

The CCP seeks to transition the world from a collection of “messy” democracies, to ordered control from Beijing and less real input from national, business, and identity groups. Among the dangers from this authoritarian model are more groupthink, and fewer opportunities for escape from government maladministration. In China, tens of millions died from such misguided communist policies, which led to massive famine from the late 1950s to the early 1960s, a triple genocide against Uyghurs, Tibetans, and Falun Gong, and military conflicts or threats of war in nearly every decade of the existence of the People’s Republic.

The near total destruction of democracy in Hong Kong, which had been nurtured during the transition process from British rule to Hong Kong’s autonomy under the “one country, two systems” agreement, came when Beijing radically violated its treaty with Britain and the Basic Law, to reformulate Hong Kong’s governance, including its electoral system.

The most recent violation expanded the Election Committee from 300 to 1,500 seats and empowered it not only to choose a chief executive, as previously, but to nominate Legislative Council (LegCo) candidates, and pick 40 of its own ministers of parliament (MPs), including from those within its own ranks. There are a total of 90 MPs in Hong Kong, so picking 40 of them without any pretense of election is an egregious violation of democratic principle.

On Sunday, Beijing only allowed 364 members of the 1,500 on the committee to be elected, by fewer than 4,900 mostly pro-Beijing Hongkongers who cast ballots. In 2016, many more had the right to vote, numbering 246,440 who cast ballots.

Voters on Sunday were mostly pro-Beijing elites. The poll was for an “Election Committee,” which selects Hong Kong’s chief executive and most of its lawmakers. Carrie Lam currently holds the post of chief executive. In March, the new chief executive will be chosen, which could again be Lam. Typically, Beijing makes known its preferred candidate to guide the voting and it is hard to say no.

Sunday’s election selected 600 legislators prior to ballots being cast and eliminated all but one centrist candidate, who was likely allowed to take his seat as a token opposition candidate. This candidate, Tik Chi-yuen, quit the Democratic Party to form his centrist party, called Third Side. Only two opposition candidates had run, neither of whom was strongly pro-democracy. The other opposition candidate was Francis Chau, who ran as an independent and competed in the social welfare sector. He only garnered 37 votes and lost.

The Times quoted Tik as saying that his election “showed there is at least some room for us … It doesn’t matter whether it’s one or two voices. It’s worth taking part as long as we can represent how some Hongkongers think deep down,” he said.

But Tik’s election will also help Beijing sell the process to the naive as a real election. A Beijing loyalist who serves as a Hong Kong delegate to the national parliament, said that Tik’s election “showed that your political affiliation won’t guarantee you victory, or that you must be rejected,” according to the South China Morning Post (SCMP).

While Beijing seeks to present the Hong Kong elections as a real example of non-messy “democracy,” this is clearly false. One pro-Beijing candidate told the Financial Times that he was unable to name his own constituency. Many did not bother to disclose their platforms in nomination paperwork. According to the SCMP, “at least 121 candidates left their manifestos blank when filing their nominations.” Dozens of candidates wrote vague slogans such as “patriots ruling Hong Kong” and “create a better future.” This political vagueness in Hong Kong, according to the SCMP, is a new phenomenon that pro-establishment analysis characterises as “playing safe in the city’s new landscape of elite politics.”

Ironically, some of the main criticism of these vague pro-Beijing candidates comes from mainland China, where an academic criticized them for having “undermined the legitimacy of the revamped electoral system.”

The academic, who is an adviser to the central government on Hong Kong affairs, criticized the candidates as “lazy.” He had previously written that Beijing did not want “loyal garbage” or “yes men” running Hong Kong.

The academic attempted to deflect blame for this pro-Beijing laziness on opposition candidates who decided to stay away from the polls, thereby not providing the pro-Beijing candidates with the foil they supposedly needed to express their thoughts to the public. The real reason they stayed away, of course, is the vetting of candidates to ensure their “patriotism,” and the threat of jail time for anyone who loudly supports true forms of democracy.

One commenter in the SCMP article laughed at the assertion that Hong Kong’s election legitimacy was undermined, when there was no legitimacy to begin with. “'[U]ndermined the legitimacy of the revamped electoral system’? What a joke indeed! How can one expect such a pre-arranged caged democracy—just 364 seats out of 1,500 seats could be competed by only 412 candidates … The whole process was just a farce, to speak the truth—a big regress of our once democratic political system which was promised to move forwards gradually towards a universal suffrage of our election of the chief executive in the Basic Law.”

Beijing seeks to promote itself in Hong Kong as the great democratic equalizer, standing against both the property tycoons, and the chaos of the pro-democracy legislators, who the CCP equates with the police riots of 2019. This is obviously false, given that the CCP allied with the tycoons to extinguish tycoon power, and instigated the violence of 2019 through their control over the Hong Kong police, albeit mediated by Carrie Lam.

The CCP will claim to release more land to produce more housing and thus lower housing costs, while it could have done this all along. In any case, as more mainlanders move to Hong Kong, they will take most of the additional housing supply, leaving the cost of housing largely unchanged, all else equal.

Contrary to the mainland academic who is critical of “lazy” pro-Beijing loyalists, the real goal of the rigged Hong Kong election on Sunday was to produce a rubber-stamp chief executive and LegCo that does the unimaginable: follows Beijing’s lead even more than was previously the case.

Pro-democracy protests in 2019 increased to the point of almost 2 million nonviolent protesters in the street, with some admitted police rioting at the fringes that garnered most of the media attention. Tycoons invariably took a pro-Beijing position against the protests, in an attempt to protect their property.

The tycoons were rewarded for their loyalty to the CCP by a removal of their power. According to the Financial Times, “Pro-Beijing politicians said the central government was also keen to temper the influence of the city’s property tycoons—who have long held sway over local politics—to help push through more aggressive affordable housing policies. China in part blames housing issues in one of the world’s most expensive property markets for the 2019 unrest.”

“‘Beijing knows you need to make changes by undermining the influence of the big families,’ one politician with knowledge of Beijing’s official thinking said. ‘Then there will be less obstacles to formulate policies.’”

These are CCP talking points that blame Hong Kong property tycoons for the government policy of not releasing more land into the residential market. But it is undeniable that Beijing used the tycoons while they were useful, and not a moment more.

Ivan Choy, a university lecturer in Hong Kong, told the Financial Times that there were previously three camps on the election committee, those associated with democrats, tycoons, and Beijing. Now that Beijing has re-rigged the voting and eliminated the democrats entirely, they no longer need the tycoons.

“In the past Beijing needed to compromise with the tycoons in order to get more than half of the seats in the election committee,” Choy said. “Now Beijing has a strong will to exercise change to the land and the housing supply in Hong Kong.”

The West and its allies in Japan, India, and elsewhere must take note. The CCP will use our businesspeople, and reward them handsomely in the process, until that process no longer needs them. Then private industry, and the democracy that supports it, will be gone.