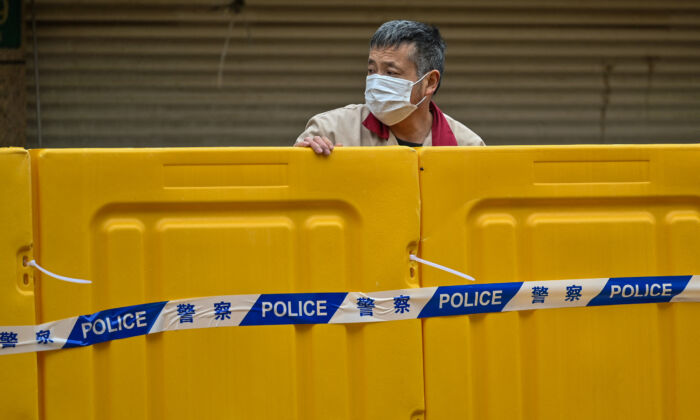 A man stands behind a barrier during the lockdown in Jing'an district in Shanghai on March 31, 2022. (Hector Retamal/AFP via Getty Images)
Chinese Regime

Amid growing cries from residents about hardships in Shanghai, the Chinese Communist Party (CCP) strengthened its control of public opinion in China, seeking to further crackdown on those who voice concerns about the draconian lockdown policies.

On April 8, the Shanghai office of the Cyberspace Administration of China said it would crack down on rumors posted on social media as speculation and anger mount among residents living in the locked-down city of 25 million, according to the South Morning China Post (SMCP).

“Some people are making up, publishing, and spreading rumors related to our measures to contain the outbreak …, especially through WeChat group chats,” the Shanghai internet watchdog said on Friday.

“We would like to remind every group chat organizer and member to obey the law and regulations online.”

A few days ago, an anonymous and untitled web post went viral on Chinese social platforms but was quickly removed. However, it later went viral on various Chinese forums outside China.

The article said that the CCP virus pandemic is “obedience training launched by Beijing” for its 1.4 billion population.

“If you still retain some kindness, decency, and compassion in your heart and are capable of a little bit of independent thinking, then the purpose of this training is to wipe your mind clean. [This training aims to] get rid of your human nature and zero your IQ. If two years is not enough, then we will take another ten. In short, you will become obedient and more obedient,” the article said.

“As a result of this training, you will learn to unconditionally accept [anything the regime asks of you]. Even those closest to you can be sacrificed [in achieving the greater good].”

Cracking Down on Rumors and Those Who Speak Out

The Chinese regime has continued to control the flow of information regarding the pandemic, and censor criticism of the government’s COVID responses.

The extended lockdown in Shanghai has led to growing cries from residents voicing hardships ranging from the denial of medical care to being separated from their children sent to quarantine.

A growing number of Chinese internet users, who usually refrain from discussing government policies in public, have taken to social media to push back against Shanghai’s blanket lockdown. Some were fired from their jobs for speaking out, and some were accused of spreading misinformation and are being investigated by the authorities.

On March 30, a state media broadcaster in Liaoning province, Zhu Xia, was fired after she urged viewers, during a live stream, to protect themselves amid the new COVID surge “for reasons that can’t be said.”

Liaoning Radio and Television, which Zhu worked for, said she violated the publicity management regulations and failed to go through the “declaration procedure approved by the channel director.”

The network then emphasized that it is a provincial state-owned media representing the local government, and requires all its announcers and hosts to take Zhu’s dismissal as a warning. It asked its employees to “introspect and be cautious of their words and deeds.”

On April 7, rumors spread on messaging groups on WeChat, the largest Chinese messaging and social media app developed by Tencent, alleging that armed police would take over the city and that group buying—which many rely on to purchase daily essentials—would be suspended, according to SMCP.

The following day, Shanghai police denied the claims, accusing a 35-year-old man surnamed Zhou of fabricating fake information. Zhou is now the target of an investigation by the local authorities.

In response to Shanghai’s “dynamic clearance” policy, Feng Chongyi, a professor at the University of Technology Sydney and a China expert, told The Epoch Times that Shanghai is China’s most technologically advanced province with better access to the internet and information abroad; and that its people are usually better-informed compared to other regions in China.

“[Many of the Shanghai residents] know how Europe, the United States, and Australia are fighting the pandemic. If Shanghai could choose on its own, it would most definitely not choose the draconian lockdown measures.”