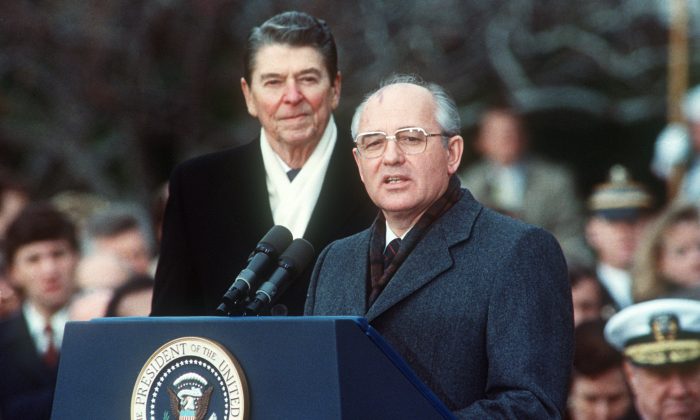 President Ronald Reagan (L) with Soviet leader Mikhail Gorbachev during welcoming ceremonies at the White House on the first day of their disarmament summit, in Washington, on Dec. 8, 1987. (Jerome Delay/AFP/Getty Images)
Thinking About China

Global leaders have sent messages of support and sadness with the passing of former USSR leader (1985-1991) Mikhail Gorbachev, who died at age 91 on Aug. 30. Gorbachev, who worked closely with U.S. President Ronald Reagan and British Prime Minister Margaret Thatcher, is seen as the man who reformed and opened the USSR.

These actions led to the collapse of the Soviet Union, independence for many of the former Soviet states, and destabilized communist control. Despite favorable views in the history of many countries, the Chinese Communist Party (CCP) has always had a problematic relationship with Gorbachev.

“The Soviet Union was destroyed by him and the generations after him,” wrote a Weibo user commenting on the death of Gorbachev.

Gorbachev represents an ideological failure in the eyes of the CCP. The CCP supports the economic opening of China within strict regime-controlled limits; however, the Party does not want to relinquish its grip on society. The Tiananmen Square Massacre will always serve as an example of where the regime draws the line. Deng Xiaoping is praised as the architect behind China’s economic opening following Mao Zedong’s death. But under Deng’s leadership, soldiers were ordered to clear the square with military force, killing unarmed, pro-democracy student protesters.

In 1989, students had been inspired by Gorbachev, seeing him as the “Ambassador of Democracy.” In contrast, the CCP, with tanks and bullets, made its message clear: economic liberalization and political liberalization are two distinct concepts, and one does not inevitably lead to the other.

Now, more than 30 years later, the Chinese economy is even more open than it was the day those students were killed at Tiananmen Square. However, social society is still tightly controlled by the CCP, and political society has not opened at all.

The CCP’s feelings about the failings of Gorbachev were further reinforced in an article about his legacy, which appeared in state-run media Global Times. The report criticized the USSR for seeking approval from the West and distanced China from the notion that “China’s opening-up is based on adhering to the four cardinal principles, including upholding the socialist path and upholding the leadership of the [CCP].”

Since the collapse of communism and the ensuing chaos and economic instability in Russia in the early 1990s, Russia has served as a cautionary tale for the Chinese regime. The CCP propaganda has effectively read: We will allow you to get rich but within the limits of a “socialist construction.”

Citizens are encouraged to get rich as becoming rich will help the country become strong. The CCP will also relieve citizens of the burden of worrying about politics and the runnings of a nation. The CCP will bring about the “Great Rejuvenation” of the Chinese nation on the people’s behalf. To this end, censorship and social control are justified. Businesses and individuals are free to interact with and benefit from the technology and capital of the West, but they are not free to engage in political debates or to access foreign news reports that question the regime.

In a 2013 speech, Xi Jinping attributed the collapse of the USSR to a liberalization that forced major organs of power and control out of the Party’s hands. “Party organizations at all levels had almost no effect, and the army was not there,” he said. CCP officials claim that Russia’s mistake was to open the society before reforming the economy.

The Global Times attributed the “partial democratization” to the Soviet Union’s collapse. Hardliners in the Chinese regime criticize Gorbachev for abandoning the Revolution. In reaction to Gorbachev’s death, former Global Times chief editor Hu Xijin, who remains a prominent nationalist, posted on Twitter that Gorbachev had made himself popular in the West “by selling out the interests of his homeland.”

For the CCP, the takeaway from Gorbachev’s legacy is best expressed in the Global Times, “As a lesson for China’s own governance, the Communist Party of China upholds its own socialist path with Chinese characteristics underscoring political maturity and sobriety.” In other words, the best way forward for China is for the people to utilize their freedoms to make money and allow the CCP to continue its hold over society lest the country sinks into post-Soviet style anarchy.