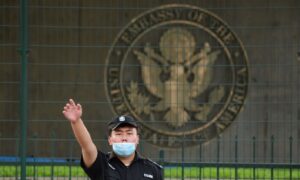 The CCP Is Vulnerable and Its Rule Could End With a Coming Coup: Expert

The Chinese regime is not as strong as it’s portrayed to the outside world, and many internal problems plaguing the regime will lead to its demise, says a former British diplomat and China expert.

These problems have been recognized by some high-level Chinese officials themselves, and they could lead a coup d’etat to remove current Chinese leader Xi Jinping to protect their own interests, according to Roger Garside, author of “China Coup: The Great Leap to Freedom,” in a recent interview on Epoch TV’s “American Thought Leaders” program.

“They can see better than most people can see, that this regime is outwardly strong but inwardly weak. And that it’s in a state of political decay,” Garside said.

“And that their best hope for preserving their own wealth and power, as well as the best hope for China, is to lead a coup d’etat to remove Xi Jinping and to launch China into a democratic transition.”

These problems are not caused by “external forces” or “anti-China forces,” which the Chinese Communist Party (CCP) often blames for China’s woes. Instead, the problems have been created by the communist regime’s own political system, a totalitarian dictatorship, Garside said.

“They [the Chinese regime] are weak inwardly because there is a moral crisis in China. There is a system of corruption—the system is corrupt from top to bottom, from left to right. And I could go on, but the single greatest area of weakness is, curiously enough, the economy,” Garside said.

The moral plunge in China began when the Chinese Communist Party (CCP) lost its moral authority after the Tiananmen Square Massacre, according to Garside. To replace the lost authority, Garside said the regime began the “biggest privatization campaign the world has ever seen,” in order to use “material incentive” so people would be loyal to the CCP leadership.

In June 1989, the Chinese regime ordered its troops to open fire on student protesters and unarmed civilians in Tiananmen Square. The CCP denies having initiated a violent crackdown, and any discussion about the protest movement is considered taboo in China.

Unnamed sources within the CCP said that at least 10,000 people were killed that day, according to declassified British cable and declassified U.S. documents.

“There certainly is moral decay and a moral vacuum; no trust, no truth,” Garside said.

Beijing’s privatization effort didn’t lead to a market economy, but a command economy that has paved the way for rampant corruption in China.

“There’s an absence of clarity of ownership in China today on the huge state-owned companies: who controls them, who really owns them, even the private ones, who really owns and controls them. This is all very opaque, and where there is opacity in economic and financial affairs, then you’ll get corruption,” Garside said. “And that allowed power holders at every level [in China] to become rich and powerful.”

In recent years, many high- and low-ranking CCP officials have been charged with graft and embezzlement, as well as senior executives of China’s state-owned companies. One of the biggest names implicated in corruption was Zhou Yongkang, a former security chief who was sentenced to life imprisonment in 2015.

Underscoring all of China’s problems was its economy, which is not as strong as the Chinese regime has touted, according to Garside.

“Since 2008, they [the Chinese regime] have relied upon pumping billions of credit into the system in order to maintain an artificially high growth rate. And this flood of money has led to a great deal of distortion, false economic activity, un-economic activity, and fragility within the financial system,” he said.

Rather than sitting on the side and wait for political changes in China, the United States and its allies should be proactive such as helping to bring down the Chinese regime’s Great Firewall, which blocks access to many foreign websites and social media sites, Garside said.

“The communist regime is vulnerable. But I do not believe that the totalitarian regime will be destroyed solely by dynamics within China. I think it’s absolutely essential that the U.S. and its allies go onto the offensive,” he said.

Because China and the United States are deeply connected, particularly on economic and social fronts, the United States can’t just sit idly in the face of growing Chinese threats. “If we don’t counterattack against this ambitious and dangerous regime, we are going to lose our freedom,” Garside said.

“We cannot just sit back and say, we have right on our side, we will make a better job of running our own countries. Yes, we’ve got to do that. But we’ve also got to find the vulnerabilities. We’ve got to educate our people of the peril which faces us.”