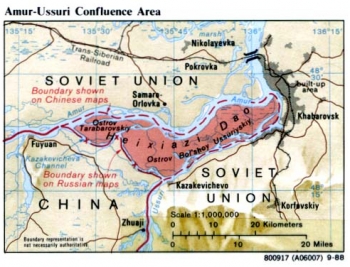 China’s Heixiazi Island (Bolshoy Ussuriyskiy Island), which was usurped by the former Soviet Union nearly eighty years ago, and is still in Russian possession, will be returned to China in August. However, according to the agreement between the Chinese communist regime and Russia signed in 2004, China will take back only half of the island; the other half has been permanently ceded to Russia

Heixiazi Island is located at the junction of the Heilongjiang River and Wusulijiang River (Ussuri River) in northeastern China. Its area of 327 square kilometers is equivalent to four and half Hong Kong Islands, about the size of Chongming Island in Shanghai.

Historically, Heixiazi Island had always been part of China’s territory without dispute. In 1929, after the China Eastern Railway Incident, it was invaded and seized by the Soviet army. During the Soviet Union’s invasion of Northeastern China, the CCP did not fight alongside of the Kuomintang and the Chinese people; the CCP used this invasion as a chance to launch its own armed uprising within China. In China this is known as the CCP’s “armed defense of the Soviet Union,” playing the ignominious role of a traitor.

Throughout history, Russia has shown itself to be an aggressor. Since the end of Qing dynasty, Russia has encroached on and gobbled up vast areas of Chinese territory. However, even according to a series of treaties, such as the Aihui Treaty and Beijing Treaty between China’s Qing government and Russia, a number of islands, including Heixiazi Island and Zhenbao Island (Treasure Island, or Damansky Island) should still belong to China. The occupation of Heixiazi Island by the Soviet Union broke signed treaties; it was an act of naked aggression.

In 1919 and 1920, Soviet Union declared publicly that it would “renounce all unfair treaties with China” and “forgo all of the Czars’ privileges in China.” Therefore, in May of 1929, China’s Northeastern regional government, led by Zhang Xueliang, announced that it was taking over operations of the “China Eastern Railway” from the Soviet Union, in accordance with the Kuomintang government’s decision to gradually reassert sovereignty over those illegally occupied Chinese territories.

In August of the same year, the Soviet Union broke its promise to give back the land to China; the Soviets broke off diplomatic relation with China, and launched a war of aggression, dispatching eighty thousand troops to occupy the critical eastern and western gateways of northeastern China. The Soviet Union’s coordinated naval and air operations coordinated with the ground invasion.

The Kuomintang government ordered Zhang Xueliang to resist the invasion, but he suffered a military defeat. Soviet warships sank Zhang’s three naval vessels. The Soviet army then seized Heixiazi Island, tied up all the Chinese islanders with ropes and shipped them off to the opposite shore.

At the critical moment of the Soviet Red Army’s invasion, when the Kuomintang government tried to regain control of China’s northeastern railway, the Chinese Communist Party’s Central Committee issued instructions requiring communist party members in different regions to arm themselves to “safeguard the Soviet Union,” and to defeat Zhang Xueliang’s army in the Northeast.

On September 26, 1929, Stalin issued a statement to the CCP: “Whoever faithfully, truly, firmly and without reservation arm to safeguard the Soviet Union, they are the true revolutionaries and internationalists.” This communiqué can still be read today today in the Complete Works of Stalin, published by Beijing People’s Publishing House.

The then 31-year-old Liu Shaoqi was Secretary of CCP’s Manchu Provincial Party Committee at the time. The instruction he issued stated: “Although the China Eastern Railway Incident was headed by a KMT warlord, it is still the beginning of the imperialist armed attack on the Soviet Union.”

On December 8, the Central Committee of the CCP published its 60th circular with the title, “The practical strategy for the implementation of armed defense of the Soviet Union is to launch a nationwide armed uprising.” Experts on the history of the CCP commented in unmistakable terms: “The series of orders given by the Communist International to the CCP to start an armed insurrection was precisely aimed at meeting the needs of Soviet Union’s war over the China Eastern railway.”

Later, after talks mediated by the United States and other countries, China and Russia signed the “Khabarovsk Treaty” to settle the “China Eastern Railway Incident.” The Soviet Union continued to exercise control over the railway while the Soviet Red Army withdrew from northeastern China. However, the three islands, including Heixiazi Island, which had been occupied by the Soviet army, were not returned to China. This is the root of the so-called “border dispute” that remained.

The spectacularly ascendant China (in international prominence) of today should have made greater effort supported by sound reasoning, to demand the return of these disputed territories, including Heixiazi Island, taken by the Russians. Even if the effort should fail, at least this issue could be shelved for the time being and left for the next generation to resolve, so that future Chinese people would have the opportunity to revisit the issue.

But in 1999, Jiang Zemin signed “The Descriptive Agreement between the Government of the People's Republic of China and the Government of the Russian Federation on the two sections, East and West, of the Sino-Russian border,” acknowledging all the treaties signed between the Qing government and Russia, and gave away more than one million square kilometers of land, which is equal to the size of several dozen Taiwans.

In October of 2004, when Putin visited China, Hu Jintao again signed a “Supplemental Agreement for the Eastern Section of the Sino-Russian border,” giving half of Heixiazi Island to Russia.

The two border treaties between China and Russia, signed by Jiang Zemin and Hu Jintao respectively, permanently ended any hope of China’s reclaiming the lost land. After signing the treaties, due to guilty consciences, the Chinese communist regime didn’t explain the specific details in the agreements, and even classified “Sino-Russian border” as a phrase to be censored online, prohibiting public discussion and criticism of the  CCP's acts of humiliating the nation by selling out its homeland and forfeiting its sovereignty.

Click here to read the Original article in Chinese.