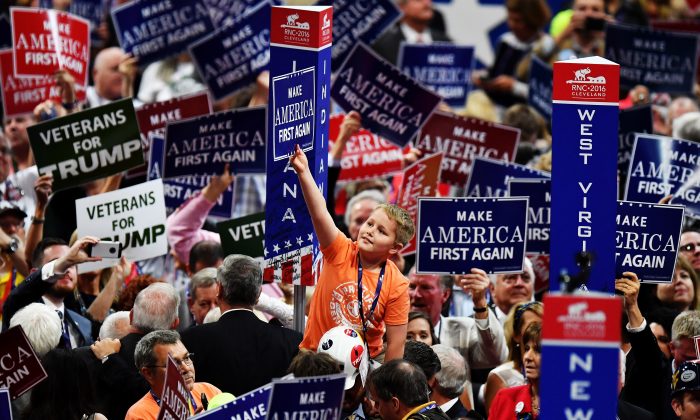 The Case for Trump—Minus “America First”?

This is not a review of Victor Hanson’s book “The Case for Trump.” Rather, it’s a passing comment on the treatment of “America First” in Hanson’s case for President Donald Trump.

In discussing Trump’s counter-revolutionary (my term) “America First” vision, Hanson wrote, “The challenge here was that the charge of isolationism only cemented the slur against Trump that he was reminiscent of Charles Lindbergh and his support of the America First Committee (founded in September 1940).”

Yes, Trump’s America First vision triggered “the charge of isolationism” (not to mention apoplexy) from the left, the Republican establishment, and sundry “progressives” and new world order types. All the above had varyingly dominated U.S. politics in the decades since World War II, pushing the country ever farther off its foundations as a nation-state into the global system, whose institutional bases were, after all, established by a pair of Soviet agents, Alger Hiss (United Nations) and Harry Dexter White (International Monetary Fund).

Certainly, to these same globalists, it’s safe to say that “the charge of isolationism,” as Hanson wrote, “only cemented the slur against Trump,” which was spawned by vague but distasteful notions of “sullied” Lindbergh, as Hanson puts it, and the America First Committee. It’s notable that Hanson, in making a case for Trump, seems to share this outlook.

Indeed, he repeats their standard smears of Lindbergh and, by extension, the America First Committee. Why was Lindbergh “sullied”? Lindbergh, he tells the reader, was “at best” silent as Hitler and Mussolini rose. “At worst,” he was a conspiracy theorist who blamed “international Jewry” and “British monarchists” for our entry into World War II.

This is the rote interpretation of Lindbergh, as repeated by the left, the Republican establishment, sundry “progressives,” and new world order types. A return to the record, however, shows this interpretation is unfair.

It’s unfair to dismiss the hero-aviator as “silent” in the 1930s when he made multiple trips into Nazi Germany at the behest of the U.S. government to gain intelligence on the Nazi aviation industry. It’s unfair to characterize Lindbergh as a conspiracy theorist about “international Jewry” and the rest. Doing so in ahistorical shorthand, however, is a quick way to ensure that America First retains its discredited and also disreputable aura. Hanson’s Trump “challenge,” then, would seem to be to distance Trump from it.

He accomplishes this some pages later.

“The Trump team’s sometime employment of the supplementary slogan “America First” was supposedly a window into its soul, given that the slogan only provided further ammunition to critics. The isolationist, anti-war, noninterventionist, and often anti-Semitic 1940 movement of Charles Lindbergh (which included at one time the likes of John F. Kennedy and Frank Lloyd Wright) had alleged that Jews and British imperialists had sought to force America into another war on the continent. Trump supposedly resurrected it.”

Here, America First has been downgraded to merely that “supplementary” slogan of “the Trump team”—not even attributed to Trump himself. And thank goodness, since the America First slogan, Hanson reminded us, “only provided further ammunition to critics”—and we mustn’t have that. After all, America First, Hanson said again, was “the isolationist, anti-war, noninterventionist and often anti-Semitic movement of Charles Lindbergh …”

In my view, “America First” was not only what made Trump’s candidacy unique in presidential history, it was not only the key to Trump’s success with the “deplorable vote,” it was also, and equally as importantly, a catalyst for the chain reaction that resulted in his Marxist enemies in and around the Deep State going nuclear on him and attempting a coup against his presidency. Why?

As discussed in my book, “The Red Thread: A Search for Ideological Drivers Inside the Anti-Trump Conspiracy,” Marxism has been a common driver of revolutions and coups, successful and failed, during the past 170 years (and before that, it was called something else). Throughout the 20th century, Moscow was the main instigator and enabler of these same aggressions, and especially so within the United States.

Whether anyone recognizes it (including Trump himself), Trump is America’s most anti-communist president ever, bar none. Not even Ronald Reagan’s anti-communism exceeds Trump’s, tempered as it was by Reagan’s “internationalism” and commitment to “free trade,” both of which are positions that have been easily subverted by communism to undermine the national interests of the United States.

The restoration of the nation-state was the organizing basis of Trump’s successful presidential candidacy. The profundity of this “America First” principle cannot be overestimated: A strong nation-state is a bulwark against international socialism and its “one world” framework, which has been pressed upon Americans for generations in different guises, up to and including “globalism.”

But what was America First, really?

A War on Globalism

In 2016, I had occasion to research the America First Committee and present my thoughts on it in relation to the Trump presidential campaign. (My address was published in the Journal of Strategy and Politics.)

Reading into the documents and speeches and letters of the America First Committee, I found a grassroots movement to maintain an officially neutral America with separate interests from the rest of the world. The group’s concerns—agree with them or not—weren’t to appease Hitler and advance anti-Semitism, as we are incessantly told.

They discussed constitutional matters, American liberties and their loss during a state of “war socialism” and regimentation, and Congress’s war powers, which they saw being seized by a usurping chief executive. They also discussed their sons’ precious lives, which they didn’t want to see lost by the ten thousand. After Germany attacked the Soviet Union in June 1941, they were gravely concerned about a U.S. alliance with one totalitarian monster, Stalin, to defeat Hitler, another totalitarian monster. Better to let them fight each other, some said.

As former President Herbert Hoover pointed out in one of many pre-World War II speeches, for Uncle Sam to go to war allied with the dictator Stalin “makes the whole argument of our joining the war to bring the four freedoms to mankind a gargantuan jest”—particularly, as he would also point out, since the Communist Party, and also Stalin’s secret agents, were already conspiring in a dirty, covert intelligence war against the United States, as partly revealed in prewar investigations by the House Un-American Activities Committee. (In my book, “American Betrayal,” I ponder the impact on U.S. policy-making and war-making that this same Soviet intelligence army of more than 500 confirmed agents inside our government and related institutions might have had. It was considerable. It was also cataclysmic.)

As for the charge of shortsightedness, Sen. Robert Taft (R-Ohio) sounded not a little clairvoyant when in 1941 he asked: “Will that part of the world which Stalin conquers with our airplanes and our tanks be consecrated to freedom [of speech and religion and the rest]? … Or, after a Russian victory with our aid, must we step in with our armies to impose the four freedoms on 200,000,000 people 10,000 miles away …?”

At the very least, the name-calling is not the full story, then or now; nonetheless, it always ends the discussion.

Not for Trump. Despite smears, wails, and much gnashing of teeth, Trump would double down on his “America First” slogan during his presidential campaign, trumpeting it at campaign rallies. In his first formal foreign policy address in April 2016, he announced that “America First” would be his guiding policy as president.

“My foreign policy will always put the interests of the American people and American security above all else. It has to be first. Has to be. That will be the foundation of every single decision that I will make. America First will be the major and overriding theme of my administration,” he said.

Of course, more enraged headlines followed. But consider for a moment what it means when a presidential candidate makes waves by declaring he will put America first in formulating policy and, further, has to explain what it means to do so and, then, on the whole, is met with derision, outrage, and fear on the part of commentators and politicians and academics and the like—no matter where on the political spectrum they may have located themselves.

This was not only proof of how far along on the continuum between nation-state and global system the United States really was at this moment. It told us that the most revolutionary thing Trump said in this same address was the following:

“We will no longer surrender this country or its people to the false song of globalism. The nation-state remains the true foundation of happiness and harmony. I am skeptical of international unions that tie us up and bring American down and will never enter [them].”

With America First, Trump declared war on globalism, the new world order, one-world-ism, internationalism, and the rest. He was plucking at lost chords of anti-communism, too, and even bucking unseen Marxist currents. This revived an old struggle in American politics. It’s a struggle the adherents of America First had always lost.

Trump’s unexpected success, however, tells us this is not an idea whose time is past, no matter what his critics—or even supporters—have to say about it.