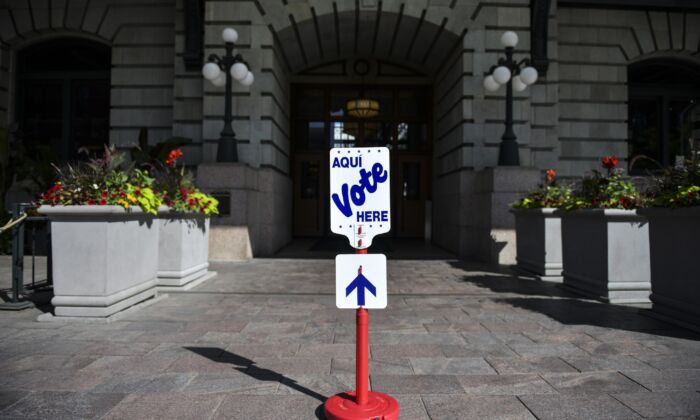 On June 28, Colorado voters took to the polls during the state’s primary election to choose a candidate for Colorado’s newly created 8th Congressional District. Republicans chose state Sen. Barbara Kirkmeyer as their candidate, and Democrats chose state Rep. Yadira Caraveo as their nominee.

Kirkmeyer topped three other Republican contenders, receiving 40.9 percent of the vote; her closest opponent, Jan Kulmann, received 22.7 percent. During the primary campaign, Kirkmeyer’s campaign raised $337,756, according to the Federal Election Commission (FEC), placing her second to last regarding campaign contributions.

Nationwide, if Republicans are to gain the majority in the House, they’ll need to flip a net of five seats, and Colorado’s newest congressional district is a true toss-up. As such, the race for the 8th Congressional District could help decide who controls Congress following the November election.

Kirmeyer, a conservative state senator for Colorado’s 23rd District, described herself as a common sense candidate.

“Having grown up on a farm and later working as a dairy farmer, I was taught and instilled with a deep appreciation for the values of hard work and frugality” she told The Epoch Times. “Don’t spend more than you earn!”

She noted that her upbringing instilled the deep conservative values that would inform her decision-making in Congress.

Likewise, Caraveo, a progressive representative of Colorado’s 31st District, came from an immigrant family that instilled the value of hard work, according to her campaign website.

“[Caraveo’s parents] didn’t have much education or much money, but they knew that hard work and caring for others are the values that build strong communities and family.”

Kirkmeyer says she has a clear vision for what she wants to do if elected to Congress.

“My most immediate priority upon taking Congress is to secure the southern border. … After that, my priorities are to rein in inflation by reducing spending, to roll back regulations that drive up the cost of energy, to reduce deficit spending and debt, and to restore America’s energy independence,” she told The Epoch Times.

When explicitly asked what she wants to do about the U.S. southern border, Kirkmeyer said, “The Biden administration has opened the door to chaos at the border, resulting in a flood of illegal immigrants and drug trafficking at the southern border. Let’s restore order to the border. We should enhance border barriers where appropriate and restore the ‘Remain in Mexico’ policy as starting points.”

In addition to securing the border, she said she envisions removing excessive regulations from Colorado’s energy and agricultural sectors.

“My vision for [the 8th Congressional District] is a thriving community built around conservative principles: unleash our energy and agriculture workers from burdensome regulations, reduce the cost of living by increasing the supply of affordable goods and services, and reduce crime and drugs by fully funding our police,” Kirkmeyer said.

Caraveo’s priorities, if elected to Congress, differ from Kirkmeyer’s. She views Congress as “all talk and little action,” and she wants to change that, according to her campaign website.

Specifically, as a doctor, Caraveo says she has a unique understanding of the health care system.

“Yadira understands how the health care system works from the inside, she’ll bring a unique perspective to health care reform, and the fight to lower drug and insurance costs and expand access to quality care,” her website reads.

It also notes that Caraveo wants to represent “the voices of Coloradans long ignored in Washington, particularly those of Brown, Black and Indigenous communities.”

When asked about her opponent, Kirkmeyer said voters should look to Caraveo’s voting record to foretell how she would behave in Congress.

“Caraveo is fully committed to the left-wing, ‘woke’ agenda—Caraveo coddles criminals, teaches young kids that they are racist, and supports the very policies that have resulted in chaos at the Southern border,” Kirkmeyer said. “Her record is consistent with those of the ‘Squad’ members.”

Caraveo said in a statement that “Kirkmeyer is dangerous for Colorado families.”

The reason Kirkmeyer is dangerous, Caraveo says, is that “Kirkmeyer supports a total nationwide ban on abortion without exceptions, and cheered the radical [Supreme Court] decision to overturn Roe. She opposes even the most common sense gun violence reforms to keep Coloradans safe.”

In response to Caraveo’s assertion, Kirkmeyer told The Epoch Times: “I’ve been pro-life my entire career, and I will not adjust my position due to the political winds. I’m also a realist. Incremental progress toward preserving life is still progress. That starts with opposing any taxpayer funding of abortion or Planned Parenthood, promoting adoption alternatives where possible, and limiting later term abortions.”

Kirkmeyer also had a response to Caraveo’s reference to her inability to keep Coloradans safe, making a similar claim about the Democratic nominee.

“When you punish crime, you get less of it. So, the corollary is also true. When you go easy on criminals, you get more crime. That’s exactly what liberal politicians have been doing in recent years,” Kirkmeyer said.

“My opponent, Yadira Caraveo, is no exception. Caraveo coddles criminals. She endorses policies such as cashless bail that put bad guys back on the streets and result in more crime. I will stand up for and fully fund law enforcement, secure the border to reduce the trafficking of deadly fentanyl and other drugs, and put repeat offenders behind bars.”

When asked why Colorado voters should choose her over Caraveo, Kirkmeyer said that “we’ve experienced almost two years of unbridled progressivism, and the results are clear: a deteriorating quality of life, skyrocketing cost of living, more crime and lawlessness, and chaos at the border.”

The progressive experiment has failed,” she said. “The past two years have been eye-openers for many Americans.

“I want to do the opposite: focus on reining in spending, cutting the cost of living, reducing crime, restoring order at the border, and improving the quality of life. This is a contrast between my vision of hope and opportunity versus Yadira Caraveo’s rubber-stamping of the policies of decay.”

Neither Caraveo nor her campaign returned a request for comment.

Thanks to a population increase of almost 745,000 new residents, according to the most recent U.S. Census report, Colorado gained a new seat in the House, bringing its representative total to eight.

Because of the passage of Amendments Y and Z, Colorado’s state legislators didn’t get to draw the 8th Congressional District’s boundary lines. Instead, an independent commission of four Democrats, four Republicans, and four independents agreed on where to place the boundaries.