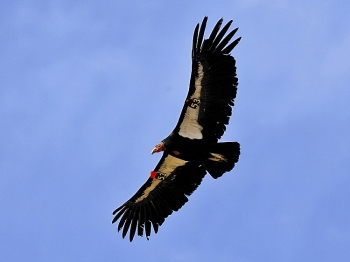 The California Condor Climbs Out of Near-Extinction

By Carlen Zhang
Print
The California condor went extinct in the wild around 25 years ago, with only 27 birds raised in captivity. But now the condor is coming back. The largest flying bird in America is supposed to reach a population of 400 this spring, with 200 of them in the wild.

According to CNN, curators state that the birds have had a good hatching season at the breeding centers in California and other places.

Michael Mace, the curator of birds at the San Diego Zoo Safari Park, said according to CNN that “At the end of the breeding season, we should be at 400 if all goes to projection.At the end of this year, we could have 200 birds in the wild. Both would be significant milestones.”

How did they do it? As reported by Sign On San Diego, Mace said that it had to do with the eggs, as the mothers cannot really distinguish between one egg and another. So, after the mother laid one egg, a handler would take it from the nest when she was not looking, and place it in an incubator. In reaction to the missing egg, the mother would lay another.

Sign On San Diego quoted Mace saying, "By us removing the first one it stimulates them to lay a second….That’s why we were able to take the population from such a low point and grow it fairly quickly."

At the moment, the condor population is 394, including 181 in the wild, which is a vast improvement since 1987, when the bird went extinct in the wild and only 27 were in the San Diego Zoo.

Unfortunately, according to CNN, Mace notes that condors are consuming DDE, a toxin, when they eat marine carcasses. Mace explained that this affects the shell of the condor eggs, as the toxin causes them to thin. So, conservationists take the thin-shelled eggs, which are laid in the wild, and replace them with thicker-shelled eggs from breeding centers. Then, the thin-shelled eggs are transported to breeding facilities, where they hatch.

Condors can weigh up to 29 pounds, and their wingspan reaches an impressive 9 and one half feet. They live up to about 60 years, and live in wooded mountains and scrub lands.