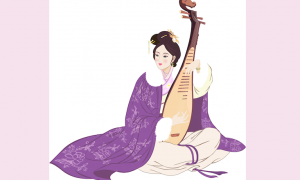 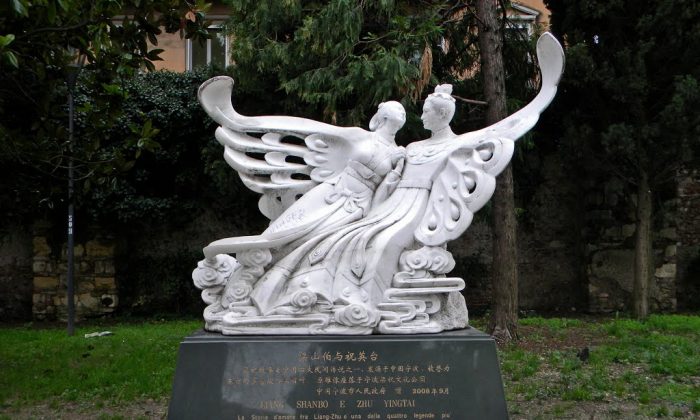 A statue in Verona, Italy, depicting Zhu Yingtai and Liang Shanbo, known as the “Butterfly Lovers.” (Courtesy of Garrow)
China

The Butterfly Lovers: A Look at China’s Romeo and Juliet

Like those of us familiar with Shakespeare’s star-crossed lovers, the ancient Chinese were no strangers to ill-fated romance. The legend of the “Butterfly Lovers,” also known as Liang Shanbo and Zhu Yingtai, took place over a thousand years ago, and is still told today as one of China’s four great folk tales.

As far as the story and message go, however, the “Butterfly Lovers” bears only passing resemblance to “Romeo and Juliet.” While the Chinese tale contains its share of young love, it is framed by measured action, propriety, and steadfastness. The duels and poisons of Shakespeare’s impulsive romantics have given way to disguises, leading metaphors, and unbreakable family arrangements.

Our heroine, a bright young lady called Zhu Yingtai, was her family’s ninth child and only daughter. Her elderly father not only raised Zhu with loving kindness, but also taught her how to read and write. In addition to the classics, Zhu studied and admired great women of China’s past.

In ancient China, schools did not accept female students. So Zhu disguised herself as a boy and left for an academy in the city of Hangzhou, where she could continue her love of learning.

At school, Zhu met a boy called Liang Shanbo, whom she soon befriended. Becoming sworn brothers, they studied, played, ate, and lived together. They composed poems and couplets, and debated history and philosophy.

Three years went by, and Zhu fell in love with Shanbo, but he never for a moment suspected that Yingtai was in fact a beautiful young woman, and one who had fallen in love with him. She tried many times to show her affection, but Liang misunderstood every time.

Finally, it was time for Yingtai to leave the academy. Her father had become ill and she was needed at home.

To see her off, Shanbo walked with Yingtai for 5.5 miles of her journey. The silent walk was heavy with the pain of separation. As they neared a stream, Yingtai noticed a pair of mandarin ducks together on the water, and threw a branch at them. Watching the startled birds fly off in different directions, Zhu broke the silence.

“My elder brother, when we part today, who knows when we shall meet again? We are just like these ducks, who separate in flight.”

“Esteemed little brother,” Shanbo said, “even if we are brothers about to part ways, how can you compare us to husband and wife?”

To the Chinese, a pair of mandarin ducks represents the love between man and woman, and even this final hint had failed to reach his senses. All Yingtai could do was beg Liang to visit her someday. The moment of departure finally came; in tears they bade each other farewell.

Yingtai had known to plan ahead. Before setting off, she told her secret to the teacher’s wife and bade her to inform Liang. Only then did her feelings finally get through to him.

But fate was cruel. As Shanbo hastily left to propose to her, let us turn to the house of Zhu.

Yingtai was celebrated as a rare woman scholar by the people of her hometown. Her father recovered from his illness, and happily informed her of her upcoming marriage to Ma Wencai, the gifted and cultured son of a wealthy and powerful provincial governor.

The Chinese hold that marriage is not simply a union of man and wife, but the act of joining two families as one. In this case, the Zhu and Ma families had a history of amiable relations, and both were of high social standing. To cancel the engagement at this time would be unthinkable.

So it was that upon meeting his beloved, Shanbo did not receive Yingtai’s hand in marriage. There could be no words; the silence between them sounded the crushing denial of his innocent love.

Shanbo, who as a man of resolution had devoted himself to Yingtai, never recovered. Devastated, he soon fell ill and died.

Yingtai was torn. In her heart, she was just as devoted to Shanbo as he had been to her. As a woman who had given him her love, it would be only right to be true to him. But her betrothal to Wencai was a family matter, and one could not simply live according to the whims of personal sentiment.

Finally she agreed to marry Wencai, but only on the condition that the marriage procession pass by Shanbo’s grave, and that she be permitted to pray and sacrifice before his tomb. After all, she had to stay true to her promise.

Through an exchange of letters, Wencai recognized Yingtai as a woman of supreme character. She would not give up her love for the late Shanbo, and being himself a man of scholarly caliber, Wencai would not fault her for it.

On the day of the wedding, Yingtai came dressed in funereal white. As the marriage procession passed Shanbo’s grave, the weather turned stormy. In the rain, Yingtai wept before his tombstone, lamenting that neither in life nor in death was there to be union between them.

At that moment, thunder and lightning shook the earth, splitting open a divide in Shanbo’s gravesite. Yingtai was caught in and fell into the abyss. Then the chasm collapsed as rapidly as it had opened.

As the two families scrambled to rescue their daughter, the weather suddenly let up. Two large and colorful butterflies, fluttered out of the tomb. In dreamlike splendor the pair danced and weaved higher and higher into the heavens. Were the butterflies not the unfortunate couple, now rejoined in the afterlife?

It is said that Ma Wencai and his father reported the events to the emperor, who then proclaimed Yingtai to be a woman of extraordinary virtue and had her recorded in official history.

The story of Liang Shanbo, the young scholar devoted to pure love, and Zhu Yingtai, the learned woman who followed him to the grave in honor of her promise, is just one expression of the traditional standards to which the ancient people held themselves.