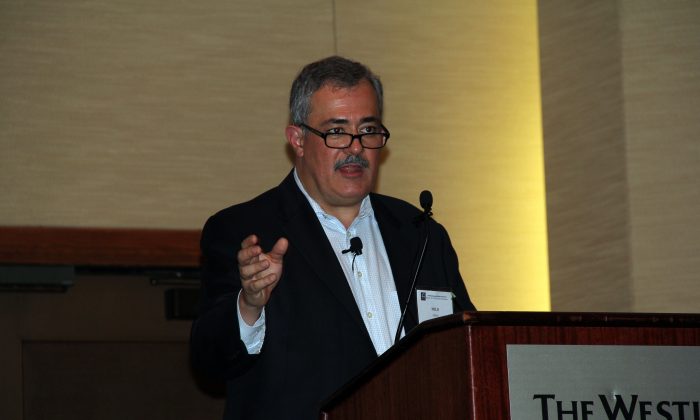 The Business of Google Fiber

KANSAS CITY—Google Fiber installations are picking up pace in Kansas City, but questions remain as to why the internet giant would go into such a capital-intensive business and how it expects to make money.

At a Fiber to the Home Council conference in Kansas City (K.C.) last week, Milo Medin, Google Fiber’s vice president of access services, explained some of the company’s reasoning.

“We expect to make money from Google Fiber,” he said. “This is a great business to be in.”

The economics, it appears, lie not only in getting the product right, but also in the installation process.

When Google Fiber requested interest from cities about its 1 gigabit per second (Gbps) fiber-to-the-home network, 1,100 cities replied. K.C. was selected and is now abuzz with startups and entrepreneurs.

Medin said that Google was initially surprised at the strong response from U.S. cities. After examining further, they began to understand the interest.

Incumbent Internet service providers (ISP) were stuck in mediocrity, and with slow Internet speeds not much faster than 15 megabytes per second (Mbps), they were stuck in the past.

“Access networks have become bottlenecks to innovation and to new sets of services flowing over the Internet,” said Medin.

Speed matters to the user, he added, noting how things have changed since dial-up was replaced by broadband.

“Speed empowers you to do things that would be impossible or impractical without it,” he said. “Incumbents don’t have the financial incentives to build a network like this, so we decided to.”

Medin admitted that the project was more challenging than originally estimated, explaining in part why the company went quiet for nearly two years after announcing the K.C. selection.

“Delivering a gigabit cost-effectively and in a way that really empowers users to see real performance differences is hard,” he said.

Rather than just competing with present ISP companies, Google aimed to build a “differentiated service” defined by the gigabit speed.

To highlight the difference, Google Fiber bundled television services into the rollout. This required programming agreements, an abundance of legal resources, and security audits to ensure that the content was protected, according to Medin, who described this as “a long and very complicated process.”

Then there were quality issues.

While 1 Gbps allows a two-and-a-half-hour movie to be downloaded in a matter of minutes, Google wanted to integrate popular Internet video sites, such as Netflix and YouTube, to further highlight the potential.

Google also built its own hardware to showcase higher-quality and faster access to data.

Along with the 1 Gbps and television services, Google Fiber’s top-of-the-range plan—$120 per month for 2 years—includes 4 devices: a high-definition television box, a recorder capable of recording 8 shows at once and storing 500 hours of programs, a network box with a wireless router and 4 Ethernet ports, and an integrated Android Nexus 7 tablet.

“No one developed these sorts of devices, so we had to,” Medin said. ”We even did the hardware design ourselves; we built all the software that runs on them.”

The base plan, a one-year contract of $70 per month for 1 Gbps does not include television, but like the top plan, it comes with free installation. For the less affluent, a third plan offers a free 5 Mbps service for seven years, but charges a $300 fiber installation fee that can be paid for over two years, with the option to upgrade.

While some providers can offer 1 Gb at similar prices, it is rare, and Google Fiber’s deals are a good value, creating a lot of interest. Getting the product right was obviously one part of the challenge, but the investment is huge and on those rates, many are asking how it will make a profit.

While Medin did not address the long-term gains for the company, which many believe will come in the form of application sales and increased traffic for Google, he did say that a streamlined installation process is key to their business model.

Medin said that Google did not ask for tax breaks or funds but required streamlined government processes, such as permitting and inspections, that would facilitate the installation process rather than delay it.

“Oftentimes leadership doesn’t understand how these rather mundane issues affect costs so much,” he said, “but they add up to real savings when you are doing a large-scale bill.”

Although Google Fiber will not reveal the number of residences registered, it has confirmed that 108 of the 202 selected fiberhoods reached the target.

The company has since announced that it plans to do the whole of Kansas City and will go back to do later subscribers. For now, however, the installation process has been economically effective, according to Medin, allowing all the crews to install in “one big wave” while providing users definite installation times rather than a 6-hour block.

“Users turned out to really like that,” he said.

Google Fiber is not advocating a national plan for its network, but it is obviously encouraged by K.C. According to local surveys, users are generally happy with the product and the service.

Earlier this year, Google announced that it will offer its fiber service in metropolitan areas of Kansas and Missouri. It is also building a network in Austin, Texas, and has taken over an existing fiber network in Provo, Utah.

Medin said that cities need to be “intentional“ about high-speed Internet, noting that there are a variety of avenues in both public and private domains.

While the Federal Communications Commission has encouraged high-speed Internet, Medin warned cities not to wait for federal help.

“There is no silver bullet,” he said. “This is a long-term process, but the sooner you start, the sooner things will begin to change.”