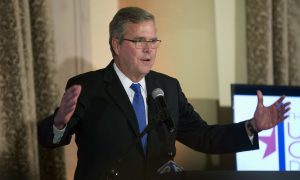 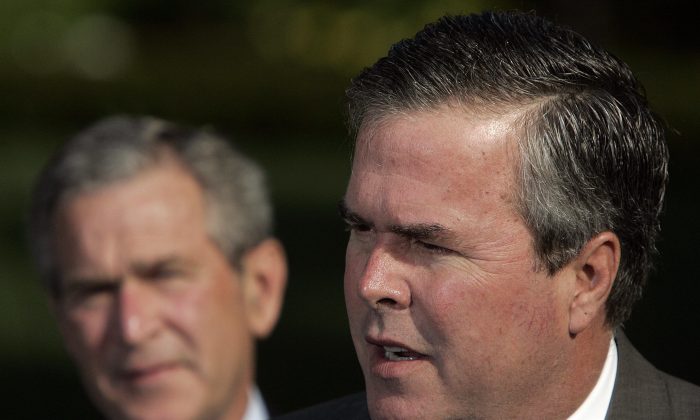 The Bush Dynasty Forges On

“I love my dad. In fact, my dad is the greatest man alive,” Jeb Bush said, jokingly offering to fight anyone who disagrees. “I love my brother. And I think he’s been a great president.”

Judging by the outline of his economic platform in a speech given to the Detroit Economic Club on Wednesday, Bush was perfectly sincere. He offered a small government agenda cloaked in populist rhetoric in the mold of George W. Bush, famous for his brand of “compassionate conservatism.”

“I don’t think they ought to balance their budget on the backs of the poor,” Bush, then governor of Texas, said in the fall of 1999, triangulating against a staunch Republican Congress bent on deficit cutting. “I’m concerned for someone who is moving from near-poverty to middle class.”

I love my brother. And I think he’s been a great president.
— Jeb Bush

On paper, Jeb Bush’s economic agenda aligns with much of the other 2016 GOP candidates. He celebrates free-market capitalism, sings praise to private solutions at the expense of government intervention, and offers economic growth—he wants 4 percent a year—as a panacea to the country’s problems.

The difference is that he never shows even a hint of blaming the poor for their poverty, and takes care to frame the market as virtuous precisely because it helps the needy.

“How do we restore America’s faith in the moral promise of our great nation that any child born today can reach further than their parents?” Jeb Bush said. “If we can’t answer that question, no tax, no new welfare program, will save our system or our way of life. Because America’s moral promise isn’t broken when someone is wealthy. It’s broken when achieving success is far beyond our imagination.”

The two central policy planks underlying Bush’s speech are similar to what his older brother has been famous for, deregulation and education reform.

Jeb then takes a leaf out of Obama’s book and uses examples from real people’s lives to illustrate his points, having learned from Romney’s failure that the electorate disfavors statistics-laden stump speeches.

“One of those business owners, Derek Little, had a simple way to describe his frustration: ‘I’m running a legit business … They could be doing something better,'” Bush said.

“Sharon [Delay] founded a recruiting company in Westerville, Ohio. Here’s what she said: ‘It’s as if the politicians and regulators in Washington want me to fail—and spend all their time thinking up new ways to ensure that I do … You either want me to be the engine of the economy or you don’t!'”

One strategy that Republicans have used to shy away from the issue of income inequality has been to target education as the source of the problem. George W. Bush gave the country No Child Left Behind, and Jeb Bush bangs loudly on the drums of education reform.

“To address the income gap, let’s close the opportunity gap,” Bush said. “[In Florida] we raised expectations and standards, and we assessed faithfully to those standards. We made sure that every child counted in the system, that they weren’t cast aside if they were struggling readers or had problems.”

Like his brother, who as a lame-duck president pushed for reform to grant a path to citizenship for all the illegal immigrants living in the country, Jeb Bush is profoundly pro-immigration.

Being the primary season, Bush gave an oblique condemnation of Obama’s November immigration order in brief mention of “constitutional powers,” and kept his praise of immigration short, but stood his ground and argued for immigration as a positive good.

“Immigration is not a problem,” Bush said. “While the political fights go on, we’re missing this opportunity. I view fixing a broken system as a huge opportunity to get to that four percent growth.”

The issue will likely emerge as the main divide between Bush and the other GOP candidates in 2016. While others have either condemned immigration reform or kept reticent on the topic, Bush has a long record of pro-immigration from which no pivot is possible. He heralded immigrants as the future of the nation in a 2013 speech.

“Immigrants created far more businesses than native-born Americans over the last 20 years. Immigrants are more fertile, and they have more intact families. They bring a younger population.

“The one way that we can rebuild the demographic pyramid is to fix a broken immigration system to allow for people to come, to learn English, to play by our rules, to embrace our values, and to pursue their dreams in our country with a vengeance—to create more opportunities for all of us,” he said.