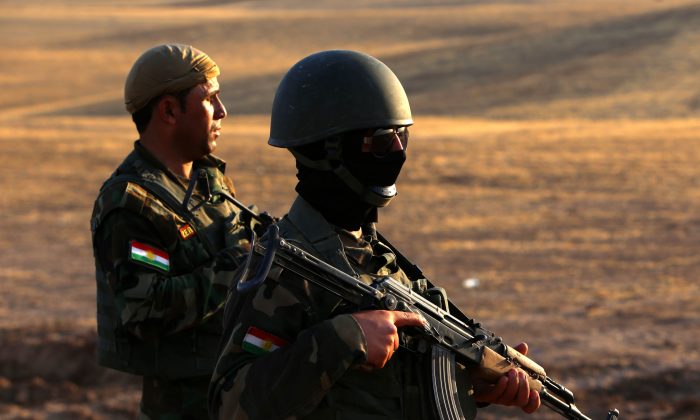 Iraqi Kurdish Peshmerga fighters take position on the front line in Khazer, near the Kurdish checkpoint of Aski kalak near the capital of the autonomous Kurdish region of northern Iraq, on August 14, 2014. (Safin Hamed/AFP/Getty Images)
Opinion

Just one month ago, the Chief of Staff to Kurdish President Barzazi and the Kurdish Defense Minister travelled to Washington, D.C., and policy makers wondered if, finally, the time was ripe for an independent state. The Iraqi province of Kurdistan was held up as what Iraq could be: a secure area with a booming economy and a what was thought to be a well trained army.

After the American-lead no fly zone in Iraqi Kurdistan in 1991, the Kurds focused on internal economic growth by taking advantage of the vast supply of oil. The Kurdish Regional Government convinced oil companies like Exxonmobil, Total, and Gazprom to defy the government in Baghdad and invest in the region by showing them how stable their investment would be, while the rest of Iraq became engulfed in the rising number of I.E.D.

A model for regional stability, an independent Kurdistan was the future of Iraq, many (including Vice President Biden) thought.

In June, ISIS took over the Iraqi cities of Mosul and Tikrit, and quickly focused their sights on the north eastern Kurdish region. While groups like the Afghan Taliban receive funding through the illicit trade of illegal drugs like heroin, ISIS is much more sophisticated, said Steve Levine, a New America Future Tense Fellow, at a recent panel discussion held at New America. They are doing something that no terrorist group has been able to do so far: gain control of standard resources like wheat fields, oil refineries, and dams that power hydroelectric plants. They’re organized, they have a central command and control center, they’re logistically sophisticated, and they have democratized violence using social media for their own purposes. All of these things have allowed ISIS to continue their advance and drive  at the heart of the Kurdish independent region, i.e. oil refineries in the north, and so the bubble has burst on dreams of an independent Kurdistan.

As recently as last week, the Kurdish city of Erbil was attacked in a strong offensive by ISIS, and American diplomats living in the city were in danger. Fearing another Benghazi disaster, which left four American diplomats dead, President Obama ordered the use of targeted airstrikes to slow the advance of ISIS. Bolstered by these airstrikes, the Peshmerga have pushed back ISIS in concentrated areas. But in vast areas without air support, the losses of the Peshmerga have continued. Without proper training and experience, the Peshmerga simply have not performed as expected, said Col. Derek Harvey (Ret.) a former Senior Analyst for Iraq for General David H. Petraeus. The losses currently being felt by the Peshmerga may be due to the fact that after the Iraqi government pulled out of several towns, and the Kurds over-extended their territory, extending their borders by almost 40 percent overnight, said Denise Natali, a Senior Research Fellow at the National Defense University.

At the same time that Kurds have been taking these significant territorial losses, the backbone of their economy –  their oil industry — evaporated almost overnight. All of the major oil companies in the Kurdish region have left, and the economy has come to a virtual standstill, said Natali. More so, Kurdish tankers that are currently carrying oil have been operating in international legal limbo and sitting just off shore. Unable to dock and unload their cargo, a legal battle has begun in American civil courts. To the delight of the government in Baghdad, the State Department has actively called countries and oil traders to discourage the oil from being purchased.

The advance of ISIS has shown that Kurdistan cannot succeed without a strong Iraq, and vice versa. The U.S. airstrikes that have bolstered the Kurds have been closely coordinated with the government back in Baghdad, and the intelligence shared between the two armies has been essential. As for the Kurdish oil, it can only be exported if Baghdad drops its proprietary claims and allows it to be sold on the international market. Put simply: the fantasy of a Kurdish independent state has evaporated for the time being. But if the Kurds continue to work with the government in Baghdad, there’s a chance that they could prevent ISIS from spreading into Jordan or Lebanon and further destabilizing the region, and, if they’re lucky, they could start to rebuild the region — together.