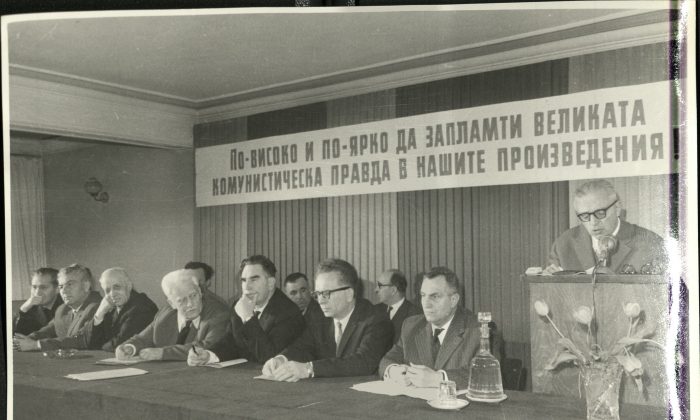 Dimitar Dimov speaks at a meeting of the Association of Bulgarian Writers in 1964. Among those sitting are Panteley Zarev (second row, second left), Georgi Karaslavov (first row, fifth from left) and Kamen Kalchev (first row, seventh from left), who were some of the most fervent critics of the novel "Tyutyun." The slogan above them reads: "Let the great Communist idea spark ever higher and stronger in our literary works.” (National Museum of Bulgarian Literature)
The Dead End of Communism

For three consecutive days, author Dimitar Dimov was forced to sit and listen to the speeches of 23 of the most respectable critics in Bulgaria, subjecting his newly published novel to destructive, Stalinist-style criticism. Never in the history of Bulgarian literature had an author faced such a panel and then been forced to rework his novel.

The novel “Tyutyun” (“Tobacco” in Bulgarian) was published at the end of 1951 and became an instant hit in the small Eastern European country, though the critics giving speeches labeled it a failure.

After acknowledging his talent as a writer, only a couple of the critics had anything favorable to say about the novel. The others accused Dimov of being influenced by cosmopolitanism, eroticism, and decadent traits of Western literature, instead of embracing socialist realism, the sole acceptable genre at the time. They recommended that the book be modeled after Soviet writers like Valentin Kataev or Alexander Fadeyev; the latter championed Joseph Stalin, calling him “the greatest humanist the world has ever known,” according to “Subsidizing Culture” by James T. Bennett.

“Such interference equaled a literary murder … as idea and message,” said Milena Katosheva, curator of the Dimitar Dimov House Museum, which is affiliated with the National Museum of Bulgarian Literature in the capital of Sofia. “It killed the creative drive of the author, took away his freedom of expression, his freedom of thought. After this, he no longer took up the epic task of depicting the state of Bulgarian society.”

“Tyutyun” tells the story of a big tobacco processing factory in the 1930s and 1940s and the collision of the two major classes: the capitalists (or bourgeoisie, as Marxists put it) on one side and the communists on the other.

But instead of glorifying the workers who were devoted to communist ideas and vilifying the supposedly exploitative capitalists, Dimov focused on the inner worlds of the characters, revealing their emotions, passions, and desires. He created deep, vivid, and realistic characters, who were strongly attracted to each other, ignoring the fact that they belonged to different classes—an unacceptable theme for the communist agenda at the time.

After Sept. 9, 1944, when Bulgaria exited World War II and the communists took power, literature became the regime’s absolute servant. Anything that did not contribute to socialist development was targeted for elimination.

The purpose was to clean out all bourgeois elements and affirm the socialist norm. Writers were excluded from the Association of Bulgarian Writers, lists of forbidden literature were announced, and total censorship of publishing and media, in general, was imposed.

Socialist realism limited writers to the topics of socialist people, their heroism, the socialist party, historical optimism, and socialist humanism,  Katosheva said. All literary works had to describe their characters as belonging to a social class, and only those who embraced communism could be depicted positively, for they were the heroes of the new era.

Still, Dimov defied the stiff communist dogma. To defend his novel, he wrote a 32-page statement in which he humbly, respectfully, and methodically, refuted all accusations.

What’s more, he questioned his critics and offered a freer, reformist vision of socialist realism: “Why should I–who has gathered materials, thought of the plot and the characters from all possible angles, … , spent sleepless nights and typed on the machine when others were resting–be necessarily wrong regarding some character or a situation, which critic X or writer Y cannot apprehend?

“Why should I–who has fought for months with my characters–understand my characters less, while critic X or Y understand them better under the pretext that I am subjective, and they are objective?

“If I have demonstrated in ‘Tyutyun’ that I have grasped the historical development of the events, that I am loyal to our people and that I serve its socialist ideals, then I have the freedom to follow my way, my personal initiative and inclinations.”

Even though Dimov managed to subtly confront the critics in an elegant way, he still had to rework his novel.

“I had no way of not obeying,” Dimov confessed to his second wife, Lena Levcheva, according to the Bulgarian weekly 168 Chasa (168 Hours).

“I did it to save the sole thing I have–writing.”

“I cannot forget the pain with which he said these words,” confessed Levcheva, in turn. “It was like a Biblical story. Dimov himself mounted on the crucifix, so that his child, ‘Tyutyun,’ could live. Its killing was otherwise imminent. The victory didn’t bring him satisfaction. On the contrary: It doomed him to a double-faced life.”

“Comparing his statements with those by the critics, you can see the huge gap between him and them intellectually and morally,” his daughter, playwright Teodora Dimova, said in an interview with Faktor.bg. “He kept his presence of mind, even though this novel cost him his life. In the consequent 15 years, he wrote only three plays although he was in his prime for a writer. He died at 56 years old from a sudden, massive, unsalvageable stroke.”

Dimov had two strikes against him. First, he was born into a bourgeois family connected to the czar: Both his biological father and his mother’s second husband were officers for the czar. Secondly, he was an intellectual. He specialized in histology and became a professor in the anatomy, embryology, and histology of vertebrates.

After 1944 when people from the previous elite society, including intellectuals, disappeared without a trace, the climate for these people was nerve-wracking. Already a bit hesitant, and a nervous person, Dimov was totally unprepared to face the fierce and combative atmosphere of the early Stalinist era.

“In the literary life of the 1950s, resisting the party was unthinkable,” said Plamen Dojnov, associate professor and chair of the department of New Bulgarian Studies at New Bulgarian University, and one of the most prominent researchers on the “Tyutyun” case.

“It was more about in-fighting in the literary field, where each was trying to win the party as his ally,” he said.

If Dimov had rejected the recommendation to rework “Tyutyun,” it would have brought him a lot of trouble, isolation, or cost his life.

“The waves of terror and fear between 1944 and 1950 were so shocking that the free will of the writers was simply paralyzed, and hardly anyone was capable of making a calm and rational deliberation before expressing any kind of disagreement,” he said.

Unlike similar cases in the Soviet Union, where Stalin was informed about “problematic” literature and casually intervened, with “Tyutyun,” the incumbent state and party leader Valko Chervenkov closely followed Dimov’s work on the book, right up until its second edition was published in 1954.

“What was unique in the Bulgarian case was the central role of Chervenkov, who was the main ‘constructor’ [overseer] of the book as well as of the scandal it provoked,” Dojnov noted.

Chervenkov supported “Tyutyun” under certain conditions. He wrote a personal letter to Dimov, congratulating him on the novel and calling it a “great joy for our literature,” but still insisted on his reworking it.

In another letter from 1952, addressed to Christo Radevski, the chair of the Association of Bulgarian Writers, Chervenkov writes: “I don’t know what comrade Dimov is doing–is he reworking ‘Tyutyun’? I would like someone to give him the message that he would do best if he reworks the novel, taking into consideration everything precious included in the statements–oral and written–connected to the discussions and review of the novel. I think that comrade Dimov will do very right if he publishes the second reworked edition of the book not only in Bulgarian, but also the translations in other languages to be based on this second reworked edition.”

“Chervenkov ‘saved’ Dimov, but also sacrificed the first, reformist version of the novel,” Dojnov said. “He played the ‘producer and guarantor’ roles in the reworking, taking the book back to where it was trying to escape from, thus depriving it of its identity.”

After the three-day criticism session, an unsigned article appeared in the communist mouthpiece newspaper Rabotnichesko Delo [Workers’ Deed] called “On the Novel ‘Tyutyun’ and Its Unfortunate Critics.” Later, it became clear that the initiator and final editor of the article was Chervenkov himself. A month later, the fiercest critics of “Tyutyun” were expelled from their leadership positions.

“Chervenkov wanted to affirm his authority as the ultimate judge on all issues related to culture,” Dojnov explained. “In this case, he logically took the side of the Association of Bulgarian Writers, to give a lesson to the presumptuous critics’ circle which was losing its previous privileged position.

“The top communist leader wanted to show that the mandate to manage literature was given to the Association by him, and nobody should ever think of ignoring this authority,” Dojnov said.

Left without a choice, Dimov added 250 pages to the original book, inventing new communist characters and new scenes showing the heroism and sacrifice of communist fighters.

The second, reworked, “Tyutyun” was published in early 1954, after the explicit approval of critics, who were part of the Association of Bulgarian Writers and were assigned and guided personally by Valko Chervenkov.

In 1955, a third edition of the novel appeared, with minor corrections made by Dimov. The critics remained silent. In 1962, the novel was made into a film by the prominent director Nikola Korabov.

The original version of the novel reappeared in 1992, three years after the fall of communism in Bulgaria, which took place on Nov. 10, 1989 (a day after the fall of the Berlin Wall). Today, “Tyutyun” is one of the most beloved Bulgarian novels, and it’s been translated into more than 30 languages.

Communism is estimated to have killed at least 100 million people, yet its crimes have not been fully compiled and its ideology still persists. The Epoch Times seeks to expose the history and beliefs of this movement, which has been a source of tyranny and destruction since it emerged. Read the whole series at ept.ms/TheDeadEndCom
TOP NEWS