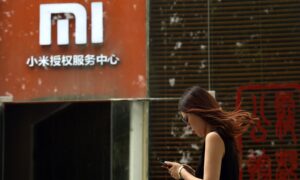 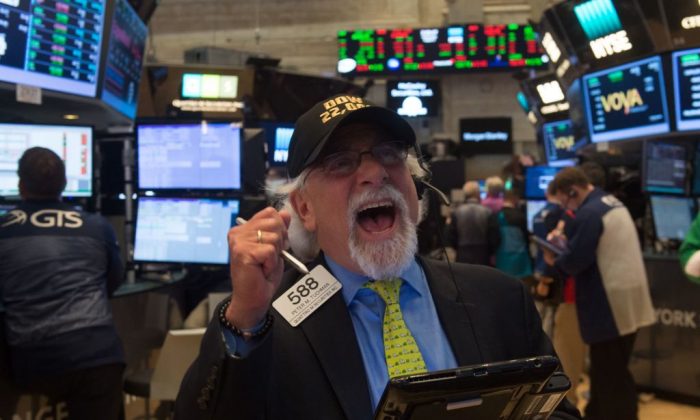 A trader wears a Dow 22,000 points hat on the floor at the closing bell of the Dow Jones Industrial Average at the New York Stock Exchange on August 2, 2017 in New York. (BRYAN R. SMITH/AFP/Getty Images)
Markets

The Bubble That Does Not Burst

Stock markets are overvalued, but neither interest rates nor unrealistic expectations pose a threat to prices
By Enrico Colombatto
biggersmaller
Print

For years, pundits have been warning of a stock market bubble and its inevitable bursting.

The reasoning behind such predictions is simple. Western economies have grown at a modest pace, restraining the profit-making ability of large corporations. Moreover, inflation has remained low, even though the West and Japan have engaged in expansionary monetary policies.

All this liquidity has fed stock markets, inflating stock prices far beyond a reasonable level. For example, since 2013, Germany’s DAX stock market index has risen by 62 percent, while the Dow Jones Industrial Average in the United States has increased by 68 percent, reaching an all-time high of 22,000 last week. During the same period, the nominal gross domestic products (GDP) of Germany and the United States have both increased by about 11 percent.

As soon as investors realize that companies are worth much less than the stock markets suggest—so the story goes—a crash will occur.

Finally, low-interest rate policies have pushed bond prices up and yields down, encouraging investors to buy stocks in hopes of achieving higher returns. When interest rates rise and bonds become attractive again, experts believe that investors will dump stocks and flock back to bonds.

All of this sounds reasonable in theory. It is true that U.S. firms’ average price-to-earnings ratio is now about one-third above its long-term average—this means profits are too low, relative to the value of the companies’ shares. So stocks are overpriced, and there is plenty of room for big corrections. So far, nothing of the sort has materialized.

Will these predictions come true? If so, when? Future scenarios will be determined by two variables: interest rates and expectations.

Interest rates are gradually rising in the United States and may rise sooner than expected in Europe as well, despite low inflation. Economic growth rates are relatively low; the International Monetary Fund predicts 3.5 percent GDP growth for the world in 2017, but only 2 percent for rich countries.

As soon as investors realize that companies are worth much less than the stock markets suggest—so the story goes—a crash will occur.

But the slow rise in interest rates is unlikely to wreak havoc on the equity markets. Investors have already factored in this possibility over the past year, and stock prices have not cooled off. In fact, higher interest rates could have the unexpected effect of further driving up valuations.

In recent years, the weak spot of Western economies has been the financial sector. If higher interest rates boost profits in banking and insurance and do not threaten public debt, the bulls will rejoice. The bubble could get even bigger.

Predicting the future of expectations is difficult. Investors are currently monitoring four variables. One is inflation. Observers take it for granted that the inflation rate in the dollar and the euro areas will not exceed 3 percent. The rule of thumb they follow is simple: If inflation is between 2 percent and 3 percent, they celebrate; if price growth is between 1.5 percent and 2 percent, they stay alert; and anything below 1.5 percent is a cause for worry.

Inflation is currently seen as a predictor for monetary policy, rather than as a phenomenon that can damage the economy and redistribute wealth. Given the prevailing approach to central banking, inflation will probably not drop below 1.5 percent for more than a quarter or two.

A new financial crisis is not around the corner, especially if higher interest rates help strengthen the balance sheets of banks and insurance companies.

Expectations about GDP will also play an important role, but they appear less problematic. The West’s current 2 percent growth rate is slower than many would like, but it is what investors expect, and they seem satisfied with it. The only surprise could come from China, where a severe slowdown could stoke pessimism worldwide, and a slowdown will occur in the coming years. But for the time being, a soft landing seems more likely than a crash.

The European Union is also providing investors with good news: It is no longer on the verge of collapse, and in the past months, it has attracted large amounts of investment from the United States. Rather unexpectedly, Brexit has been a blessing for Brussels. It has shown how difficult it is to leave the club and how expensive it could be. Moreover, the difficulties met by U.K. Prime Minister Theresa May illustrate that even the most experienced bureaucracies are unable to elaborate a plan that goes beyond regulating or taxing.

The only question mark in Europe is Italy. The country has a large, unsustainable public debt, suffers from populist tensions, and is growing at a snail’s pace. Its public deficit seems under control, but only temporarily. It could easily explode. If Italy goes broke, the entire EU could become a region that investors avoid for years. Stock markets would suffer badly.

If one looks at corporate profits and market values, shares are certainly overpriced. If investors who moved to stocks revise their strategies due to tighter monetary policy, bonds will become attractive and share prices will drop.

There is no reason to expect a crash, however. A new financial crisis is not around the corner, especially if higher interest rates help strengthen the balance sheets of banks and insurance companies.

There are, however, three potential sources of trouble that could trigger panic: a Chinese crisis, a banking crisis in the European Union, and a sudden burst of inflation followed by panicky monetary reactions. These events cannot be ruled out. The Chinese economy needs reform, European banks are saddled with too many nonperforming loans, and there is too much liquidity around.

Nonetheless, all these potential troubles do not seem imminent. If this relatively sanguine scenario plays out, the stock bubble will not burst. Shares might fall, especially if interest rates rise and investors move to bonds. But there will not be panic. Instead, it will be a reaction to new opportunities and more reasonable monetary conditions.

Enrico Colombatto is a professor of economics at the University of Turin, Italy and a Senior Fellow at Geopolitical Intelligence Services.  This report was first published by GIS Reports Online.