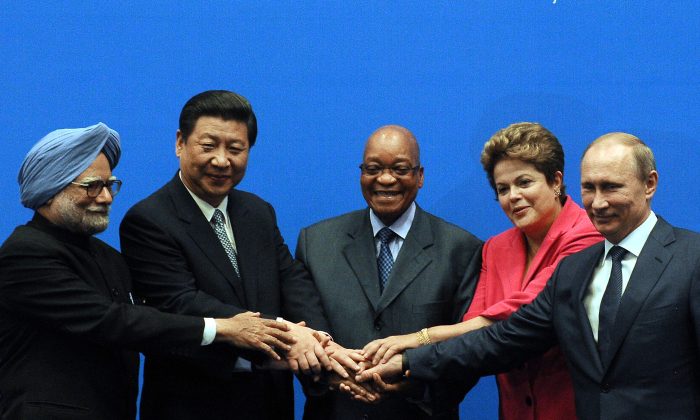 There’s an old joke about Brazil that suggests that it’s the country of the future—and it always will be. For a while this looked to be an anachronistic, possibly racist stereotype that had been decisively overturned by Brazil’s rapid economic development and competent-looking economic management. But as the administration of Dilma Rousseff descends into chaos amid accusations of corruption and incompetence, old doubts about the country are re-emerging.

Brazil’s problems may be especially acute, but they are emblematic of the tarnished image of the other BRIC economies—Russia, India, and China—too. Great hopes and expectations are still held about India’s prospects—especially in Australia—but they are predicated on some fairly heroic assumptions about the likely trajectory of future development.

Optimists (and economists) regularly point to India’s burgeoning population as a valuable asset and source of future growth. These sorts of analyses tend to gloss over the enormous impact economic development in combination with population expansion have had on the natural environment. Delhi now has the unenviable reputation as the most polluted city in the world, having recently eclipsed Beijing for this unwanted accolade.

That India is increasingly relying on coal power to fuel further economic expansion suggests that the environment will continue to come second to the primary imperative of keeping development going at all costs if the tens of millions of new, would-be entrants to the job market are to accommodated. Given that India has the largest number of illiterate adults in the world—some 287 million or 37 percent of the adult population—the challenge is likely to prove doubly onerous.

At least India can console itself with the idea that its energy imports have become cheaper over the last few years. So can China, too, but this hasn’t translated into an unequivocal boost to the economy. On the contrary, China’s declining appetite for resource and energy imports has directly contributed to the global economic downturn that is exacerbating the stagnation in the BRICs and some of their most important trade partners.

Russia and Brazil have been especially badly affected by the international collapse in commodity prices. Russia under Putin has adopted one of the time-honored strategies of despots down the ages and attempted to deflect attention from a rapidly deteriorating domestic situation by embarking on foreign adventures. Kim Jong-un might recognize the logic, but as in North Korea’s case it arguably highlights weakness rather than strength.

China is by far the most consequential of the BRICs and whatever happens there will indeed “shake the world,” as Napoleon famously predicted. It already has. Not only have China’s growing economic difficulties undermined global growth, but its domestic and foreign policies may yet have an even larger impact.

There is increasing alarm both within and outside China about the way Xi Jinping is concentrating power in his own hands and cracking down on political opponents and critical voices.

There is also growing concern about the ability of China’s technocratic elites to manage its mounting domestic economic problems. When we add China’s increasingly belligerent attitude to pursing it territorial claims in the South China Sea it is clear that China has the potential to destabilize further an international system that already looks fragile.

These developments highlight a number of things.

First, the very idea of the BRICs was arbitrary and accidental. The only thing these countries really had in common was the fact that they seemed to be on the rise at the same time, that they were or could be “great powers,” and that they seemed to epitomize a rapidly changing global order.

They still might fulfill these expectations, but recent events remind us how rapidly things can change and just how difficult it is to manage moments of political and economic transition. The second point to note, therefore, is that political competence and effective state capacity may determine how well the BRICs come through this.

Given that corruption and mismanagement are major problems in all four countries, the prospects looked mixed.

Finally, does this mean that the old order dominated by the United States and its Western allies will prevail and endure? One might be forgiven for thinking so after reading Australia’s most recent defense white paper. But the possible collapse of the European Union and America’s dysfunctional politics demonstrate that “the West” is also in a state of fragmented decline.

The rise of the BRICs wasn’t without substance, and their possible decline won’t be without consequences either. Even if the BRICs don’t reassume their upward path, the old order has been revealed as unsustainable and unrepresentative.

Policymakers around the world will have to get used to the idea that the international system is more complex, diverse, and difficult to manage than ever. For better or worse, we’re all in this together.

Mark Beeson, Professor of International Politics, University of Western Australia. This article was originally published on The Conversation.