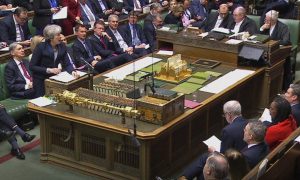 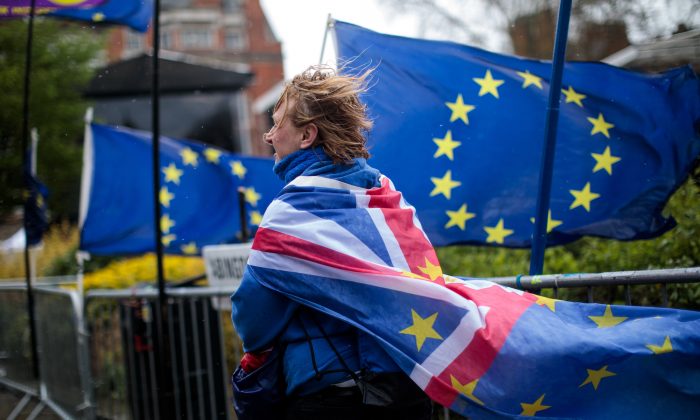 A pro-EU protester demonstrates outside the Houses of Parliament in Westminster on April 4, 2019 in London, England. (Jack Taylor/Getty Images)
Viewpoints

The Brexit Wildcard: Three Scenarios and Their Impact on the US Economy

US wants to establish new trade agreements with Post-Brexit Britain, but many questions remain unanswered.

With so much going on in the world—from the U.S. trade war with China, the Hong Kong protests, North Korean missile launches, to the immigration problem on the U.S. Southern border and rising Mideast tensions, the looming hard Brexit isn’t getting as much attention these days.

On October 31st, the United Kingdom (U.K.), the world’s fifth largest economy, will be divorcing its largest trading partner, the European Union (E.U.). It’s a very significant event for both sides. Almost half of the U.K.’s trade is with the E.U., with 56 percent of British-made cars sold to the E.U. and about 25 percent of Britain’s financial services clients located in the E.U.

It remains to be seen just how the financial services sector will be affected by Brexit, or how much it will influence the global financial markets. But banks and financial institutions are nervous. Fearing being shut out of the E.U. market if they’re not physically located there, 25 banks have already moved operations and staff into Frankfurt, the major financial center in Germany.

On this side of the Atlantic, the Federal Reserve is worried about the impact Brexit will have on the U.S. stock market and financial arrangements in the eurozone. And both the Securities Exchange Commission and the Commodity Futures Trading Commission have issued warnings regarding potentially unknown and “adverse effects of Brexit” in financial markets.

The mystery and insecurity surrounding Brexit is important and risky because the nature of the post-Brexit relationship between the U.K. and the E.U. has yet to be defined. In broad strokes, there are essentially two directions the post-Brexit world could go. The E.U.-U.K. relationship could be mainly cooperative or it could lean toward a more adversarial one.

If the trading relationship is cooperative, the E.U. would continue to allow the U.K. some trade advantages, such as lower tariffs for a relatively easy flow of goods and services. That may also include letting some low friction rules and standards to remain in place so as to minimize the disruptions in both economies.

There may even be a new bilateral trade agreement between the two. If so, it would add much needed certainty and continuity to their trading relationship. That’s the ideal situation.

If, however, the trading relationship between the E.U. and the U.K. becomes more competitive than cooperative, it would result in a deeper negative impact. The E.U. could choose to treat the U.K. like any other competitor, subjecting its goods and services to higher tariffs, high-friction regulations and the like, lowering trade and direct investment levels in both directions. That would not just hurt the E.U. and the U.K., but could have a chilling effect on the global financial and trading system as well.

An Initial Hard Brexit Is Likely

As it stands today, it looks like the split between the two will be a “hard” one, at least initially. Just over two months remain to fashion an accord, something that has eluded both sides in three years of negotiations. What’s more, with tensions rising between the U.K. and E.U. leadership, the chances of a soft Brexit grow thinner every day.

That may mean almost immediate hardship for Britain. For example, under a hard Brexit, the British government estimates that the economy will shrink 9.3 percent over the next 15 years. That would be a very high price to pay. If it turns out to be true – and no one really knows – this also does not bode well for the U.S. economy in the near future.

With no agreement in place between the U.K. and the E.U. to ease the transition for companies and workers, Britain’s exit from the E.U. at the end of October will be sudden and sharp. That could mean that one day businesses will be operating in the E.U., the next day, they won’t.

Estimates on how much the U.K. economy will suffer from Brexit vary widely, but significantly, those estimates do not account for potentially increased trade flows with the United States. Like the post-Brexit E.U.-U.K. relationship, that part of the post-Brexit reality remains to be seen.

But, as noted, that kind of economic shock could be very hard on both parties, decreasing economic activity, as well as impacting the global financial system.

Across the pond, a hard Brexit has several implications for the U.S. economy. According to the U.S. Office of Trade Representative, U.S. trade with the U.K. surpassed $262 billion in 2018, with the U.S. enjoying a trade surplus of about $20 billion. A shrinking post-Brexit British economy would certainly affect that trade.

What’s more, American companies with European supply chains, such the car industry, may face higher costs and regulations, hurting their bottom line. That would result in higher costs, lower demand and reduced employment for U.S. auto workers. There will be other effects as well – at least in the short term – for all parties in a variety of industries, including chemical, pharmaceuticals and medical equipment, among others.

On the flip side, the United States is eager to expand trade with the U.K. quickly, particularly in light of its trade war with China. A comprehensive trade agreement is the ultimate goal, but the United States would happy to secure agreements on a sector-by-sector basis as well. But legally, any U.S.-U.K. trade negotiations will have to wait, at least officially, until after Brexit has occurred.

Not all long-term negative outcomes from Brexit are a certainty, even with a hard Brexit. Still, adjusting to disruptions and new conditions in trade and in the financial markets takes time.

Letting bitter feelings or retribution guide economic policy just doesn’t make sense for the E.U., and certainly not for the U.K. There’s too much at stake.

The Way to a Win-Win Outcome

It maybe that the E.U. is engaging in a bit of gamesmanship. E.U. trade negotiators may be letting Britain suffer a hard exit in order to strike a better post-Brexit trade deal.

They’re certainly going to need it. With Germany’s economy slowing, interest rates at zero or negative and another round of quantitative easing from the European Central Bank to shore up its flagging economy, the E.U. needs all the trade with the U.K. it can get.

That’s why it makes more sense for the E.U. to cut a mutually beneficial post-Brexit deal with the U.K. quickly, in order to preserve as much trade – and influence – as possible.