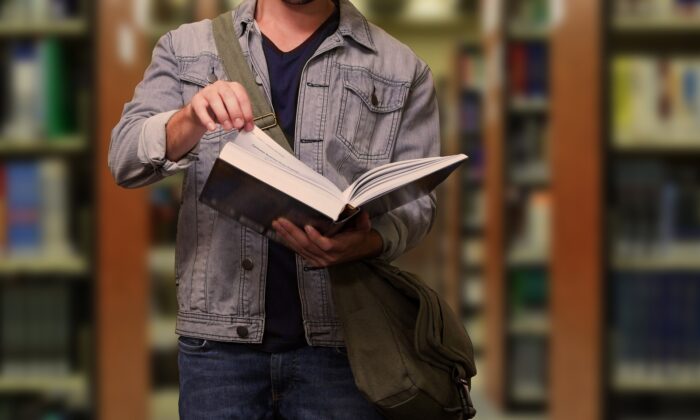 In this file photo, a college student reads a book in the library. (Gerd Altmann/Pixabay.com)
Viewpoints

The Boy Problem and the Girl Problem

“Men are abandoning higher education in such numbers that they now trail female students by record levels.”

That was the first sentence of a story in the Wall Street Journal on Sept. 6 with the dramatic title “A Generation of American Men Give Up on College: ‘I Just Feel Lost.’” The numbers certainly look stark. Women now make up 59.5 percent of college students, men 40.5, a 3-to-2 split. Also, as they proceed toward graduation, the gap widens. Six years after entering college, 65 percent of women earn their diploma, while only 59 percent of men do so. One expert tells the WSJ that we should expect the rate of males-to-females in college to reach two-to-one in a few years.

The research on which the news story was based evoked lots of commentary—Why are males slipping? What does this mean for their future prospects? Did the pandemic have a lot to do with it? If in our information economy men fail to acquire the word and number skills that the system requires and that college inculcates, what will become of these men at age 30? If automation puts taxi and truck drivers out of work, if manufacturing doesn’t come back to the United States, they’ll end up in low-paying service jobs, unable to support a family and not looking anything like marriage-able material. If you’re a 30-year-old woman with a bachelor’s degree, maybe a master’s, too, and you have a nice white-collar career and income, but you’re thinking about kids and the clock is ticking, will one of these guys attract you? Not really—women typically don’t marry “down.”

This brings us to a more immediate problem, not the financial success of men 10 years down the road, but the sexual success of women much sooner. Yes, American women are beating men soundly in the credential race. You see the widening discrepancy in four-year degrees by sex. The trend holds, too, for more advanced degrees as well. Since 2002, in fact, women have earned more doctorates than men. (This counts for recipients who are U.S. citizens and permanent residents; if we include foreign students, men outnumber women, but only because many more male Ph.D. students come to the United States to study than do female students.) In 2017–18, according to the National Center for Education Statistics, here was the breakdown for all three levels:

Those are not insignificant differences. We hear a lot about women having a hard time in STEM fields, but women dominate in the humanities fields, the social sciences and area studies, and education—and in health and biological sciences, too. Men still have an edge in business fields, but medical school enrollments now are about 50–50, while in 2016 female enrollments in law school passed male enrollments. This is an inversion of the Old Days, when women with career aspirations had two options, nurse or teacher, unless they were genuinely extraordinary. The advancement of educated women, then, is a victory for freedom and opportunity.

But—to return to the sexual point—what kind of freedom and opportunity do they experience during their time on campus outside the classroom? What does this 3-to-2 ratio of women to men do to the social lives of students?

It’s an important factor. News stories about higher education usually focus on academics, such as competition for spaces at elite schools, and controversies such as a professor using the n-word in class to make an innocent point about racism and finding himself the object of official complaints. To the undergraduates, however, the social experience of college is a huge part of the meaning and purpose of the whole thing. They leave home, move into the dorms, join sororities and fraternities, make new friends, gather at the food court and the gym, drink on Friday and attend the game on Saturday. They spend more hours interacting with one another than they do hitting the books. And they have sex.

Think of this in scientific terms. In describing the sexual behavior of human beings, social scientists presume a situation they call “operational sex ratio.” OSR sounds complicated, but it’s really just a simple proportion: the ratio of sexually active males to sexually active females. Researchers look at an environment, sometimes a large one such as a whole country, other times a small one such as a single campus, and they count the number of men interested in a female sex partner and the number of women in a male sex partner. Love and romance don’t come in here, just the mating set-ups.

If the ratio is 50–50, roughly, researchers can proceed to detail the habits of courtship, sexual activity, numbers of partners, length of partnerships, mores of hook-ups and break-ups, etc. If the ratio becomes “biased” to one side or the other, though, researchers have to add another factor to the behaviors. A 55–45 imbalance of men to women—a “male-biased” OSR—puts males in the position of having to compete for a woman a little more than they did in a 50–50 situation. Some of those guys will have to go without. Not many, mind you, the ratio being only 11-to-9, but there’s a slight favoritism that women enjoy. The girls can be a little more choosy.

Today’s situation goes well beyond that, and it’s the reverse. When we reach a 60 percent bias, a 3-to-2 differential that we see now with women undergraduates, the competition becomes a lot more tangible. Every third woman is frustrated. Now, think of the 2-to-1 bias that observers anticipate in but a few years’ time. It happens through only a six-point rise in female enrollments, but you can envision what it means when at a party on Saturday night you look around the room and see, in the words of the old Jan and Dean song, “two girls for every boy.” Imagine the 19-year-old guy whose mind is on one thing and realizing his advantageous position, and imagine the 19-year-old girl who’d like to find a steady and attentive boyfriend, but knows that she must offer the guys in the room something that the others don’t offer.

All the old forms get twisted. If this continues, a lot of damage will be done, and we can’t entirely blame the guys who exploit the situation. The sexual revolution killed the ethos of the gentleman, and all the efforts of colleges to draft rules of “consent” won’t neutralize the effects of an imbalance this gross. I think that if you asked psychological counselors on college campuses if they’re noticing an emotional cost to it, they would reply, “Every single day.”

In this respect, a heavy female-biased OSR campus is much worse than a male-biased campus. Better for everyone when girls have more of the luxury of choice than boys. They have the emotional equipment to steer the sexual mores of the young in healthier directions. Boys don’t. But that truth, of course, marks a sexual difference between males and females that the liberals in the school administration building never wish to admit in public.

Correction: An earlier version of this article misstated the performers of the lyrics “two girls for every boy.” It was Jan and Dean who sang the phrase in the song “Surf City.” The Epoch Times regrets the error.