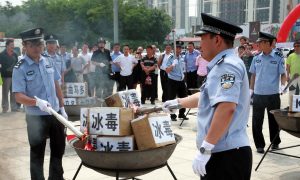 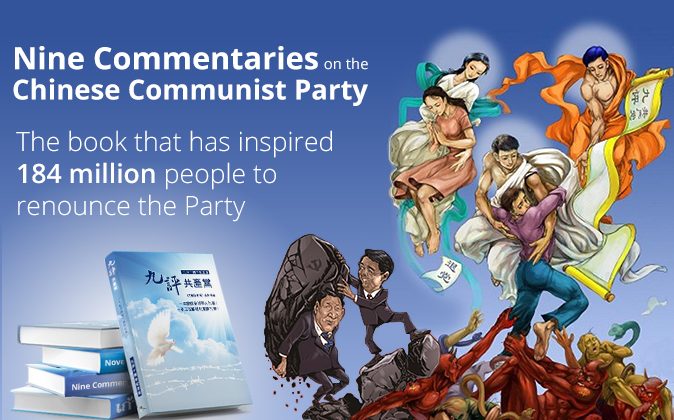 The Book That Is Changing China Is Ten Years Old

On Nov. 19, 2004 the Chinese-language Epoch Times published the first part in a nine-part editorial series called “Nine Commentaries on the Communist Party.” By speaking honestly about the brutality and deception the Chinese Communist Party has used to rule China, the series immediately grabbed the attention of the Chinese people.

A social movement known in Chinese as “Tuidang,” which means “quit the Party,” sprang up almost overnight.

On Nov. 29, 2004, the first statement to quit the Chinese Communist Party (CCP) was published on the Chinese-language Epoch Times. The “Nine Commentaries” was soon issued as a book and has since been continuously available in print and online.

MORE: Anything for Power: The Real Story of China’s Jiang Zemin – Chapter 22

Today, more than 180 million Chinese people have renounced their ties with the CCP or its affiliated organizations, specifically the Communist Youth League and the Young Pioneers, with written or online statements.

Even though 14 percent of the Chinese people have formally disassociated themselves from the CCP, the Chinese regime has over the past ten years never mentioned or criticized the “Nine Commentaries” with either an official statement or news reports through its media mouthpieces.

“The publication of the ‘Nine Commentaries’ brought a new voice to China,” Mo Jiangang, a poet and writer from Guizhou City, said in a phone interview with Epoch Times. “Such a voice exposes the crimes committed by the CCP, and reveals its violent and evil nature.”

“People are usually shocked when first reading the ‘Nine Commentaries.’ They suddenly realize that they have been living in a lie sustained by the CCP’s propaganda.”

“Before reading the Nine Commentaries, many intellectuals, including myself, thought that the CCP was still good even though it had made some mistakes,” said Chen Yonglin, a former Chinese diplomat in Australia who made headlines when he defected in 2005, in an interview with Epoch Times.

“I had mistakenly thought that the CCP had accomplished something good during the reform and opening up [of the Chinese market],” said Chen. “However, after reading the ‘Nine Commentaries,’ I’ve realized that CCP is an evil cult by its very nature.”

“CCP has committed and covered up many crimes against humanity.”

Chen said he had asked his friend to use his name to publish an online statement on the Chinese-language Epoch Times to renounce his ties to the CCP immediately after his defection.

“I think the Tuidang movement is very meaningful. Getting free from the CCP’s shackles and getting rid of its control, one can think and express oneself freely and independently,” added Chen. “When every single Chinese person can think independently, then the CCP would not be able to fabricate lies with propaganda anymore.”

Though the CCP has an iron grip on the media, publishing, and the Internet, people are finding ways to read the “Nine Commentaries.”

“Every week we get together and watch the DVD of the Nine Commentaries. And we also read one chapter of the editorial every week,” said Mr. Wu, a member of a civil organization in Yunnan Province with a membership over 110,000 people in 18 cities and counties.

“We have not skipped a week so far,” said Wu, adding that every member of his organization has cut ties with the CCP and its affiliates.

On the day of the interview with Epoch Times, Wu said that 14 members from his organization quit the CCP, 7 quit the Youth League, and 3 quit the Young Pioneers.

“Everything I am telling you is true. We don’t tell lies like what the CCP does. The CCP is simply too corrupt,” said Wu.

Many mainland Chinese tourists have chosen to renounce association with the CCP at booths and tables set up by Tuidang volunteers at major sightseeing spots and attractions around the world.

Mr. Ren, a Tuidang volunteer at the famous Grand Palace in Thailand, recalled a Chinese tourist who said he had a doctorate and worked at the Chinese Academy of Sciences. The tourist told him that the CCP is all about obscurantism, adopting policies simply to fool its own citizens. The tourist added that many Chinese with high educational backgrounds don’t believe in the CCP and asked Mr. Ren to help him quit the Party.

In Taipei, Taiwan, Liberty Square is also a tourist site frequently visited by mainland Chinese tourists. Mr. Pan, a Chinese tourist visiting Taiwan, shared with a local Tuidang volunteer how he understood how the CCP works after watching the videos of the “Nine Commentaries” back in 2005.

“The morality of the Chinese people has been totally destroyed by the CCP. Nowadays in China, nobody dares to speak the truth; people tell lies and fake products are everywhere,” said Pan.

“Everything within the ‘Nine Commentaries’ is true. I’ve known a few party members, and even they say that the collapse of the CCP is just a matter of time.”