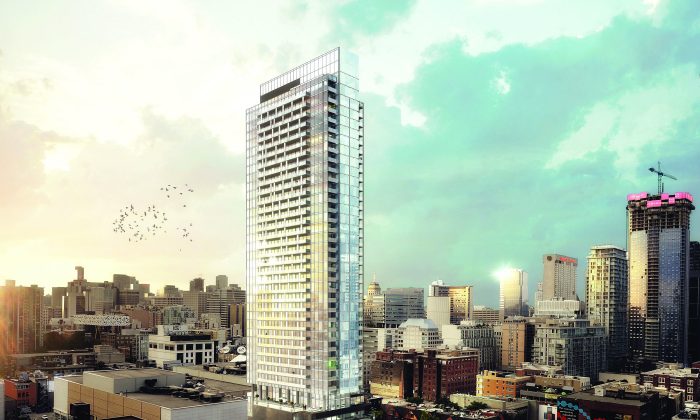 Rendering of The Bond, a 42-storey condo currently under construction on Adelaide Street just west of John Street in Toronto. (Courtesy of Lifetime Developments)
Canadian Content

The Bond Has Places for Families to Grow

The demography of the Toronto Entertainment District has morphed a fair bit since Brian Brown started developing condo projects in the area in the mid-2000s.

“Originally the people who moved here were mostly young couples, then they became married couples,” Lifetime Developments’ vice-president tells the Epoch Times in an interview at the firm’s Jackes Street headquarters.

It also means more families are in the market for larger downtown condo suites these days, Brown notes; they want two-bedroom units at a minimum, and ideally suites with some outdoor space so their children have a place to “run around a bit.”

Fortunately for families, Lifetime has just released its terrace suite collection at The Bond, a 42-storey condo currently under construction on Adelaide Street just west of John Street.

“Most people assume if it has a terrace it must be a larger unit,” says Brown. “But in our case we’ve got both: smaller units and three-bedroom units that have terrace space—and that’s unique in the market.”

Also for sale is The Bond’s $4-million penthouse, a 3,728-square-foot full-floor unit that boasts a 1,913-square-foot terrace that would give kids plenty of space to run around. And with the city having recently OK’d the addition of two extra floors for the condo tower, additional units are now available (prices start at $371,900).

Amenities-wise, The Bond’s seventh-floor “urban retreat” will include a residents’ lounge with a wet bar, event kitchen, and dining room. There’ll be a billiards room, golf simulator, and games room, plus an outdoor terrace and barbecue area.

On the floor above that, The Bond’s “fitness retreat” will have a weight and cardio training room, double-height yoga studio, outdoor pool and hot tub, and sun lounge with juice bar.

Now that construction on The Bond is well under way, Brown says its larger suites are becoming more attractive. “These buyers want to wait and see that there’s something happening onsite, that you’ve reached the point where construction is happening, so there’s almost like an end date they can see.”

Elsewhere in the Entertainment District, construction is underway on Bisha Hotel and Residences, a project Lifetime is developing in conjunction with INK Entertainment CEO Charles Khabouth, who will operate the hotel’s restaurants. And rock star Lenny Kravitz is in the midst of designing the hotel’s entire top floor.

Lifetime has just formed a partnership with luxury hospitality company Loews Hotels; Bisha will be the first brand included in its new OE Collection.

“We get their expertise and knowledge of the hospitality industry, and a connection to their services, but with the OE Collection we’re able to maintain our independent brand,” says Brown. “So we’re able to craft the Bisha brand and experience the way we think is important and relevant to the market.”

Lifetime is operating at full throttle these days, having sold more than 6,000 suites in under eight years, according to Brown. The firm has seven sites currently under construction (X2, The Yorkville, Indx, Karma, The Code, Bisha and The Bond) with two of the projects, X2 and The Yorkville, taking occupancy.

It’s a packed slate, and Brown indicates there’s more development on the way, with a potential project launch this fall plus a number of other sites going through the zoning process that he says could be released next year.

This includes the former site of the World’s Biggest Bookstore, where Lifetime is planning a project that’ll include a multi-floor retail podium with a residential tower above. The company also has a site on St Mary Street in the Bloor-Yorkville area, and another development coming in Liberty Village, an additional tower in the Liberty Market Building complex.

“There’s a lot coming—we’re not hitting the pause button,” says Brown. “The market’s been very strong and we feel it will continue to be. With all the people moving into the city, and how quickly units are being rented or resold, they’re all very positive signs.”