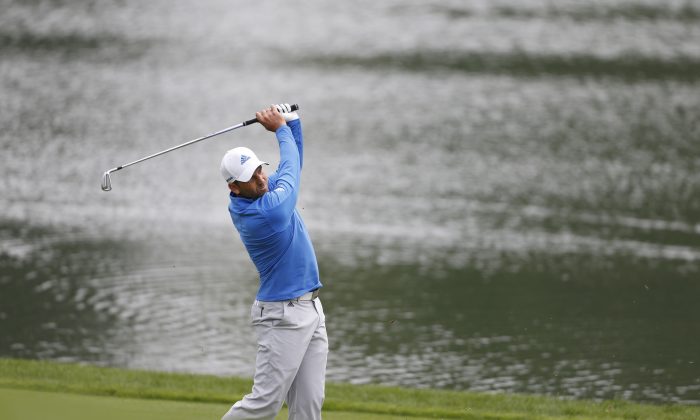 Sergio Garcia, of Spain, hits his second shot on the 18th hole, which he birdied, during the second round of the BMW Championship golf tournament at Cherry Hills Country Club in Cherry Hills Village, Colo., Friday, Sept. 5, 2014. (AP Photo/Brennan Linsley)
Golf

The BMW Championship: Garcia has One-Shot Lead at Halfway Point

Englewood, CO. Sergio Garcia has been a constant figure at the top of the world golf scene since he finished 2nd—as a 19-year-old—one stroke behind Tiger Woods in the 1999 PGA Championship.

Much was expected of him since hitting the much heralded shot up against one of Medinah’s menacing trees in the final round of that event with the exuberant Spaniard running up the fairway to see how his approach had fared.

Since that special moment, the bar for the now 34-year-old was set quite high. Some were even touting his arrival as the next progression beyond what legendary Spanish champions Seve Ballesteros and Jose Maria Olazabal had achieved in their storied careers.

That has not happened—thus far.

But, that doesn’t mean to say Garcia’s career has been lack luster. He is still looking for his first major championship but has come close on a few occasions: the most memorable being a nearly holed 10-foot par putt on the 72nd hole at Carnoustie during the ’07 Open Championship and eventually losing in a playoff to eventual champion Padraig Harrington.

Garcia’s play this season has been noteworthy in his overall improvement around the greens. In years past Garcia would play flawless golf from tee-to-green—upon reaching the putting surface he would simply fail to take advantage of countless opportunities provided. Noted for his consistency with the driver for both power and accuracy, Garcia is now demonstrating the kind of overall play that has put him in the mix in a number of key events this year—including runner-up finishes behind Rory McIlroy at The Open and Bridgestone Invitational.

Through two rounds of The BMW Championship at Cherry Hills, Garcia sits atop the leaderboard with an eight-under-par total of 132. Sergio’s second round was highlighted by an eagle at the par-4 7th and included five birdies against one bogey. Even a shot that found water at the par-5 17th was quickly forgotten when Sergio hit a wedge from 70-yards and walked away with a hard-earned par. All in all, a tournament low round of 64 which puts him one shot ahead of American Ryan Palmer who also shot a similar score in the 2nd round. Lurking just two shots back is Sergio’s nemesis—the world’s number one player McIlroy.

Garcia has certainly matured since his early days on the PGA Tour and a steady relationship with girlfriend Katharina Boehm has provided a calming influence for the sometimes tempestuous Spaniard. The German Boehm certainly understands golf having played collegiately at the College of Charleston.

Sergio did not play last week at The Deutsche Bank event, citing the need for some break time given the slavish end of season scheduling that will likely have him play The Tour Championship next week in Atlanta with The Ryder Cup to close out the end of this month.

The most fascinating element about the Garcia of today versus a few years back is the way he handles various situations that routinely occur during any round of golf. Now, instead of riding the emotional wave his approach is more even keel in not allowing himself to be derailed because emotions got the better of him for a few holes before he could right the ship.

With a world ranking of #4. and a Fed-Ex rank of 23rd Garcia is in a position to finish the 2014 season in grand style.

With two rounds to play there is no guarantee Sergio will prevail but he has shown renewed grit and tenacity. The “old” Sergio would have easily said “adios” when things went sour in a round—who can forget his often juvenile rants and raves concerning Tiger Woods? So long as his improved use of the flatstick can be maintained it appears the “new” mentally tough Garcia is nearing what many all along believed could be possible. The final two rounds at Cherry Hills will indeed prove interesting to watch.