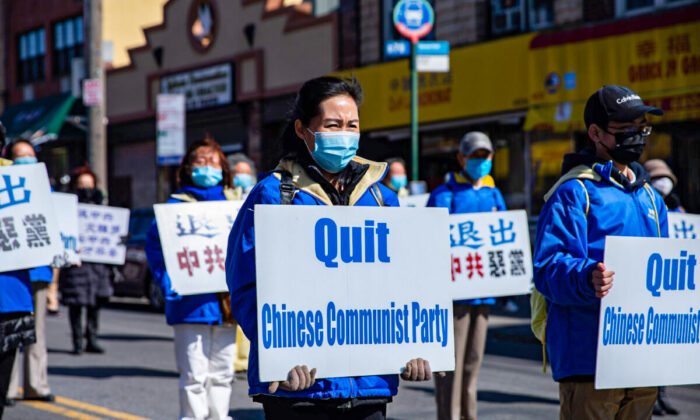 Falun Gong practitioners gather to support the withdrawal of 390 million people from the Chinese Communist Party and its associate groups, in Brooklyn, New York, on Feb. 27, 2022. (Chung I Ho/The Epoch Times)
Chinese Regime

‘Blood of Tens of Millions of Chinese on Its Hands’: US Lawmakers Decry CCP’s Abuses as 400 Million Quit Party

WASHINGTON—U.S. lawmakers and experts highlighted the Chinese Communist Party’s (CCP) history of violence and bloodshed, while hailing a milestone reached by a global movement that encourages people to relinquish their ties to the world’s largest communist regime.

The number of Chinese who have severed their ties to Chinese communist organizations topped 400 million on Aug. 3, according to the Global Center for Quitting the CCP, an organization dedicated to processing and tracking online declarations denouncing CCP memberships. The global movement is known as “Tuidang,” which translates in English to “quit the Party.”

“The Chinese Communist Party has the blood of tens of millions of Chinese on its hands, so it is no wonder that over 400 million Chinese civilians have left the CCP over the past two decades,” Rep. Tim Burchett (R-Tenn.) said in an emailed statement.

“Mao’s Great Famine, Tiananmen Square, the persecution of the Falun Gong, and the genocide of Uyghur Muslims are all proof that the CCP only cares about its grip on power,” said Burchett, who sits on the Asia subcommittee of the House Committee on Foreign Affairs.

“The Chinese people would be better served by an open and truly representative government, so I hope the Tuidang movement picks up steam.”

In recent decades, a growing number of Chinese have been questioning the CCP’s representation of the people, according to Ryan, who is one of the authors of “Nine Commentaries of Communist Party,” a 2004 book first published by the Chinese-language edition of The Epoch Times that inspired the global movement. Ryan is a pseudonym he uses to protect his identity and family in China.

He describes Tuidang as a “self-healing” and “self-redemptive” movement. He says the “Nine Commentaries” are helping the Chinese people untangle decades of CCP propaganda that instilled the idea that the Party equates to China and the Chinese civilization.

People were finally able to separate the CCP from the people, and the nation, he said.

Before the publication of the book, which systematically illustrates the Party’s history of deceit and use of mass struggle to solidify its power over society, the CCP had controlled the Chinese people and dictated their mentality without the people’s knowledge, Ryan said. While he grew up in this environment, he credits his belief in Falun Gong for helping him to transcend the regime’s indoctrination.

Falun Gong is a spiritual practice involving meditative exercises and a set of moral teachings underpinned by the principles of truthfulness, compassion, and tolerance.

Putting these principles into practice helped Ryan to extricate himself from the CCP’s hold on people’s psyche, he said. The Party has been able to manipulate and control the populace by appealing to the ignoble parts of human nature: greed, fear, and jealousy.

Such a tactic is most clearly shown in the CCP’s continued efforts in its 100-year history to set one group of society against another for no other reason than to consolidate its own grip on power, and eliminate threats to its control.

Falun Gong itself became a CCP target in 1999, after the Party deemed the spiritual discipline’s huge popularity—with as many as 100 million people practicing by 1999—a threat to its hold on power. The CCP has sought to wipe out the spiritual discipline with a society-wide campaign of arrest, torture, and vilification for the past 23 years and counting.

“Whether Chinese people have read the ‘Nine Commentaries’ or not, they have begun to discuss social issues with the verbiage and logic presented in the book,” Ryan said. “Their mentality change is as important as the action of quitting the Party.”

Chinese people are quitting the Party or its affiliate organizations by submitting online statements to the Global Center for Quitting the CCP. Most use a fictitious name to do so.

“The Chinese as a group are rediscovering their identity, one that is separate from the CCP,” Ryan said.

Andrew Bremberg, president of the Washington-based advocacy group Victims of Communism Memorial Foundation and former U.S. ambassador to the U.N., highlighted the Tuidang movement as a model for peaceful resistance against communist oppression.

“Congratulations to the Tuidang movement for reaching a new milestone. Tuidang is an exemplar of a peaceful, civil society movement where activists reach the conscience of their fellow citizens and persuade them to renounce communist ideology and control,” he said in an emailed statement.

“The efforts of the movement to end communist domination are admirable, and the free world must stand with the people of China in such brave acts of resistance against the tyranny of the Chinese Communist Party.”

Rep. Bill Johnson (R-Ohio), who sits on the House Energy and Commerce Committee and the Committee on the Budget, welcomed the latest progress of the Tuidang movement, in an emailed statement.

“[This] milestone is a clear signal to the CCP that their oppressive ways will not stand forever, and personal freedom will eventually carry the day, even in their own country. This is progress for those who stand against communism and the harm its policies have across the globe,” Johnson wrote.

Ryan said he has also seen the effects of the movement in the United States. It’s now the norm for U.S. officials to clarify that they aren’t referring to the Chinese people or nation when they criticize the CCP.

Cai Xia, a former professor at the CCP’s elite Central Party School in Beijing, was a Party insider.

Now based in Washington, Cai described her journey of walking away from the CCP, in a January interview with The Epoch Times’ sister media outlet NTD.

The first time Cai thought of quitting the Party was in 2016, after she had retired from her teaching career and was living in Beijing. The impetus for her change in thinking came from statements made by Ren Zhiqiang, an outspoken real estate tycoon in China, who questioned whether the government was the same as the Party and criticized the CCP for “taking the taxpayers’ money but not working for them.”

That was his response to CCP General Secretary Xi Jinping’s statement that “the media’s last name is ‘dang’”—a term referring to the CCP.

Known as “The Cannon” for being vocal in criticizing the Party, the real estate mogul is a “red princeling,” a term for descendants of former CCP senior officials. Thus, many thought Ren would get into trouble but wouldn’t have to pay a hefty price. However, he was sentenced to 18 years in September 2020 for alleged graft after criticizing the CCP over its mishandling of the COVID-19 outbreak in Wuhan, which led to the global pandemic.

Cai told NTD that her former place of work reprimanded her in 2016 for publishing an article in support of Ren.

“I didn’t have a voice because the Party discipline bound me, and I was considered a CCP member first and foremost,” she said. “I would rather have abandoned my CCP member identity to keep my right to speak up.”

Cai wrote a formal application to quit the CCP then, although her friends persuaded her not to submit it because of the expected financial retaliation, including losing her pension. When Ren was sentenced to 18 years in 2020, Cai again wanted to quit the Party. By that time, she was in the United States, but once again, her friends in the United States persuaded her not to leave the Party so that she could keep her pension.

However, the decision was ultimately made for her. The Party expelled her on Aug. 17, 2020.

Cai said she felt “completely relieved” upon receiving the news.

“I completely decoupled with the Party. From then on, I would have no relationship, economic or interest involvement, with the Party anymore,” she said.

Her transition to an ordinary Chinese citizen from a CCP insider came with a sense of happiness mixed with relief. She acknowledged that she had to deal with some financial difficulties because of the loss of her pension, but she knew it was something that she could overcome.

“Once you have joined the Party, you don’t have the freedom to quit it. They strictly forbid members from quitting the Party,” Cai told NTD, adding that this was equivalent to making people accomplices to the CCP’s criminal activities.

She urged people to have the courage to break the bond; such an act is the liberation of a person’s mind and spirit, Cai said.

It will also “offer a person an added layer of protection when China goes through a transition in the future,” she said.

“The Party is evil; it doesn’t mean the 90 million members are all like that,” she said.

Many Chinese who quit the communist organizations state their reason as wanting to rid themselves of the CCP’s control and avoid being considered an affiliate if or when the CCP is held accountable for its crimes in or outside of China.

These people also include those who were once members of the CCP’s junior organizations: the Young Pioneers for elementary- and middle-school-aged children, and the Communist Youth League for those who are middle- or high-school-aged.

While memberships in these organizations aren’t mandatory on paper, they are in practice. Students who haven’t joined these two groups by a certain age face increasing pressure and even discrimination against receiving education benefits.

With each progressive level from the Young Pioneers up until fully fledged Party member, the initiates’ pledge evolves from “contributing to” to “fighting for,” and eventually, “ready to sacrifice everything for” the CCP.

Even though the membership in the Young Pioneers supposedly ends at 14 and the Youth League at 28, members don’t go through a formal process to rescind their pledge to the CCP. Anyone who has ever been a member of these youth organizations is encouraged to submit a statement withdrawing their affiliation at the Global Center for Quitting the CCP platform.

This explains why the 400 million figure of those who have quit the CCP organizations vastly outstrips the official number of CCP members, which is 90 million.

Rep. Bill Posey (R-Fla.), a member of the House Committee on Science, Space, and Technology, also welcomes the movement.

“We spent decades fighting the Cold War to stop the spread of communism because we knew back then that it’s evil and capable of great atrocities,” he said.

“The Chinese Communist Party is not only a great threat to democracy and freedom but also our national security. We must stop its growing influence around the world and here at home.”