History will remember this unprecedented event 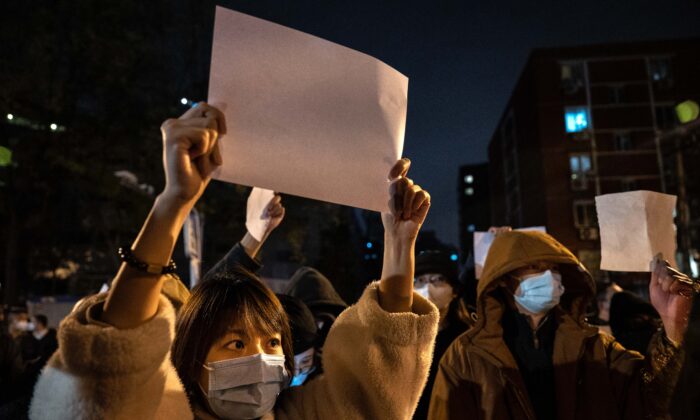 Protesters hold up pieces of paper against censorship and China's strict 'zero-COVID' measures in Beijing on Nov. 27, 2022. (Kevin Frayer/Getty Images) 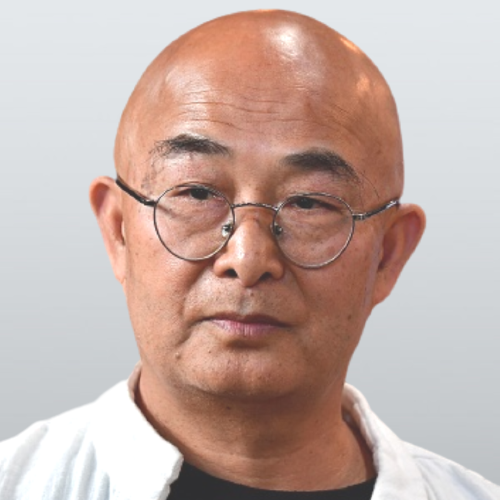 On Nov. 24, in the Jixiang Garden district at the heart of the city of Urumqi in China’s Xinjiang region, the epidemic prevention and closure policy had been in place for more than 100 days, leading to a deadly high-rise fire. Unable to escape or to be otherwise rescued, at least 10 people died, and nine more were seriously injured.

The last WeChat message of a Uyghur fire victim named Bahargul reads: “There’s a serious lack of oxygen right now. The fire is growing bigger and bigger. … The apartment unit door is locked from the outside, we can’t get out. … At this moment, I’ve no real hopes. I only want to say something here to let more people know what happened.”

Word of this tragic event went viral across the country through social networks on the internet. However, ever since the city of Wuhan was sealed off on Jan. 23, 2020, the “nucleic acid [tests] for all until COVID is zeroed out” model initiated by the great, glorious, and correct emperor of COVID-19, Xi Jinping, must be unwaveringly carried through to the end. So, as per usual, the internet police were whipped into a frenzy, deleting messages, sending out warnings, and setting new “sensitive words” to be censored as soon as they caught a glimpse of this content. They tracked down the individual (computer and smartphone) “health codes” and came to the door to make arrests.

But humans aren’t inert logs, and on Nov. 25, thousands of enraged Urumqi residents burst through district quarantines and gathered at the gates of the municipal government, demanding an end to the closure of the city and the clearance of COVID-19. Shouting “give me liberty or give me death,” the videos shot by countless mobile phones on the scene, together with the tragedy that happened the day before, once again went viral across the country.

Then, on Nov. 26, the day after Urumqi residents rallied to protest, a female student dressed in black and wearing a black mask held up a piece of blank white paper in front of her chest and stood silently before the steps of the Drum Tower at the center of the Nanjing Communication University campus. A cold wind was blowing, but she remained motionless as a statue. After a while, a political counselor ran over and took the blank paper from her hands. A passerby asked: “The blank paper is no threat; why take it away?”

The student remained motionless, holding the superfluous “blank paper” in both hands. Yet everybody present understood its message, and so came others from classrooms, dormitories, and corridors, from all directions, knocking down epidemic prevention fences on their way. Of those holding sheets of blank paper in front of their chests, most were female, the males seemingly somewhat slower to respond.

As night fell, countless people were already holding up blank sheets of paper. A male student came up to the first student, bowed deeply, and shouted: “Thank you for giving me courage! I am from Xinjiang. I was very scared at first, but now I want to fight for my homeland, to speak loudly for my compatriots who died in the epidemic prevention fire. May the dead rest in peace! May the living be free!”

The “illegal gathering” on the campus alarmed the political counselors and the university chancellor, and they rushed over to persuade everyone to leave.

The chancellor said, “You will pay the price for what you do today!”

This only further fueled the anger. Then a large troop of armed police arrived at the main university gate. At the same time, however, mobile phone videos and texts of the scene were spreading all over the country.

In more than 50 universities in Shanghai, Xi’an, Chengdu, Guangzhou, Beijing, and so on, countless college students tore down the endless anti-epidemic fences and barricades, broke through the cordon of the white-smocked COVID-19 officers, and “illegally gathered” in the center of their campuses. They all held up blank sheets of paper to commemorate the dead in Urumqi, all clear in their hearts that for the past three years, the national policy of “nucleic acid [tests] for all until COVID is zeroed out” was initially tested in countless Uyghur “reeducation concentration camps” in Xinjiang.

The world-leading “successful experience” of Xinjiang’s comprehensive surveillance evolved into an open “health code system” that all Chinese must accept during unending epidemic prevention. Any action of any individual depends on the result of scanning this code—red, yellow, or green—containing basic information about one’s body and brain, which is immediately seized by the state machine and automatically analyzed and processed.

So, over three years of evolution, COVID-19 has become COVID-1984 instead of Omicron, the fatality rate of which is greatly reduced. I think if George Orwell were still alive, he would certainly rewrite his novel “1984.”

When the blank paper arrived at Tsinghua University in Beijing, hundreds of science students added a physics formula to the white paper, and then they all raised the papers in their hands to protest. This formula is a part of the Friedmann equation, a dynamic equation for the expanding universe. The omitted last term of the equation is the contribution from dark energy; the second term, k, isn’t zero but rather represents an open universe, implying freedom, openness, and no black forces!

On the evening of Nov. 26, Shanghai citizens in the east, west, north, and south of the city, holding sheets of blank paper, broke through the heavy police blockades and gathered on Middle Urumqi Road to commemorate their dead compatriots. Thousands of people shouted in unison: “Communist Party step down! Xi Jinping step down!”

Chinese Communist Party (CCP), step down from the stage of history. And history will remember this unprecedented roar—a roar from the people of China, triggered by a silent sheet of blank paper. Since 1949, millions of people have died tragically because of the CCP’s tyranny on a scale that had never occurred in the long history of the culture; in June 1989, more than 3,000 people died tragically in a massacre in Beijing that was similarly unprecedented.

This piece was translated by Michael M. Day.

Liao Yiwu
Liao Yiwu is a Chinese writer, poet, and musician in exile, currently living in Berlin, Germany. He was imprisoned in China for four years in the 1990s after writing a poem about the Tiananmen Square Massacre in 1989. He is the author of "The Corpse Walker," "God Is Red," and "For a Song and a Hundred Songs."