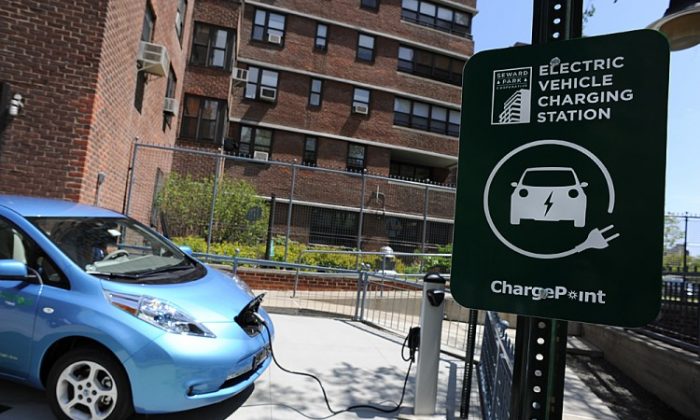 A Nissan Leaf electric vehicle (EV) is plugged into a charging station at the Seward Park Co-op apartments on Manhattan’s Lower East Side, May 2011. (Stan Honda/AFP/file/Getty Images)
Executive Branch

The Environmental Protection Agency (EPA) is putting in place new fuel economy rules for passenger cars and light trucks that are the strictest yet, even more than the standards set during the Obama administration.

They come as the result of an executive order from President Joe Biden in January and undo President Donald Trump’s rollback of EPA regulations.

Starting in 2023, automakers will be required to build all light-duty vehicles to emit 5 to 10 percent less CO2 emissions per mile than was previously required, according to the new rule released on Dec. 20.

This will increase the vehicles’ average miles per gallon to about 40 mpg by 2026.

This standard replaces the EPA rule put in place in 2020 under Trump, which only required a 1.5 percent increase in America’s fuel economy through 2026.

“The final rule for light duty vehicles reflects core principles of this Administration,” EPA Administrator Michael Regan said in a statement. “We followed the science, we listened to stakeholders, and we are setting robust and rigorous standards that will aggressively reduce the pollution that is harming people and our planet—and save families money at the same time.

“At EPA, our priority is to protect public health, especially in overburdened communities, while responding to the President’s ambitious climate agenda. Today we take a giant step forward in delivering on those goals, while paving the way toward an all-electric, zero-emissions transportation future.”

The EPA estimates that the finalized rule will reduce carbon emissions from cars to about 132 grams per mile in 2026 from about 166 grams in 2023. The agency also says it will reduce greenhouse gas emissions by 3.1 billion tons by 2050.

The EPA also says the mandate will unlock $190 billion in net benefits to Americans through the year 2050 by reducing how much it costs to drive and by improving the environment.

The EPA claims that while its new standards are ambitious, they also provide an adequate lead time for manufacturers to comply at “reasonable” costs. The agency projects that the final 2026 standards can be met by increasing sales of electric vehicles to about 17 percent.

Under the Bipartisan Infrastructure Law signed by Biden last month, $7.5 billion is allocated for electric vehicle charging stations, and more than $7 billion is set aside for investments in battery manufacturing.