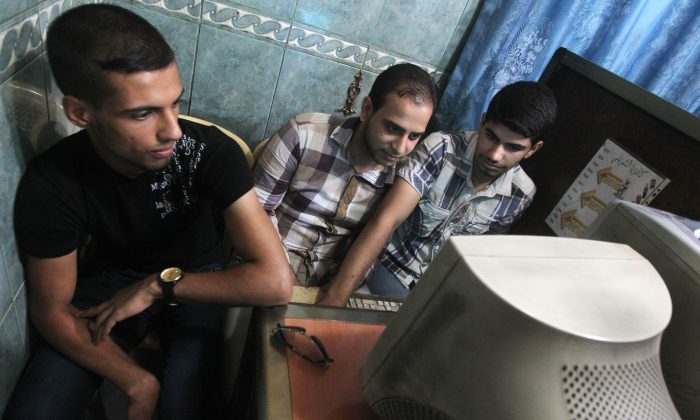 Iraqi men use a computer at an Internet cafe in Baghdad on June 26, 2012. (Ahmad Al-Rubaye/AFP/Getty Images)
Opinion

The Best Weapon Against Terrorism in Iraq

There’s not a lot to joke about in Iraq today, but the one running around Baghdad is that the only place in town that is not connected to the Internet is the Ministry of Telecommunication (MOT).

The Ministry has been trying the full Mubarak by gradually blocking the Internet, citing security concerns as ISIS fighters blitzed their way toward the capital. This Pavlovian response to muzzle the medium — but not the messenger — is probably bad tactics in the war for the Iraqi heart.

Since June 15, when a leaked document exposed the MOT requested that Internet Service Providers (ISPs) block the Internet inside the country, the edict has achieved total shut down in the five Provinces where ISIS fighters have made the most gains. It’s also been able to block all kinds of social media websites in the rest of the country.

The Ministry has since used coercion in their attempted technological blockade. According to another leaked document, ISPs were ordered to sign a pledge promising to block the Internet or be put on a list of Iraqis who ‘threaten national security.”

Emad Alsharaa, a media and public relations manager at the Institute for War & Peace Reporting said that “threatening national security” falls under article 4 of the terrorism law, and conviction could lead to execution.

But there are significant grievances within the Iraqi government, a friend who’s in touch with officials inside MOT tells me, saying that  MOT officials are taking direct orders from Prime Minister Maliki’s office. Even though this is illegal, they don’t have the technical skills to offer a better solution that does not breach basic digital rights.

In addition, some officials don’t approve the way the Internet shutoff has been handled and prefer not to have the Internet blocked, he said, and that outside pressure would be the most effective way to counter Maliki’s knee-jerk, close-it-down reaction.

Iraqi Network for Social Media, a Blogging community from all around the country and different sects, is asking the government to turn the Internet back on. In a report on the importance of the Internet’s role in the flow of information — and the importance of keeping it accessible — INSM asked all the ISPs to compensate the users for the blocked period.

After a week of silence on the matter, the Ministry spoke for the first time this past Sunday and deflected blame to higher levels of government. In a statement on their website, Amir Khodor Bayati, one of the MOT senior technical supervisors said in Arabic:

“We received an order from ‘higher authorities’ in the Government to block the Internet because of the terrorist attack. A big conspiracy is happening now against Iraq, and the enemy is using the Internet  to promote fabricated and fake news…blocking the Internet is an urgent need now. Many countries have cut Internet services when protests occurred, and we need every patriotic Iraqi to stand next to us against this attack on our country.”

The Ministry is officially allowing the use of social media applications in the rest of Iraq during working hours (7 a.m. – 4 p.m.), and the use of Internet browsers 24 hours a day. “The blockage of the Internet [in the five provinces] is temporary,” says the Ministry, “and we are in the process of putting a plan to give the access back to these services.” Still, many friends in Baghdad tell me the Internet is still blocked even during work hours.

Even with this grandiose effort by the Iraqi government, ISIS still has access to the Internet, and their websites are still thriving. This leads to the larger question, so who’s being hurt by all this, exactly? ISIS, or the citizens of Iraq?

Hhaydar Amzooz, a co-founder of INSM, said that journalists in Iraq had their own hashtag so they could report and share more accurate information.  Now, their work has been distracted by fighting for the simplest thing: a right to connect to the Internet.

Even though blocking the Internet is illegal, by Iraqi law, it’s important that more governments, and influential international organizations make it clear to the Iraqi Government that their best weapon in the fight against terrorism is the voice of their own citizens.