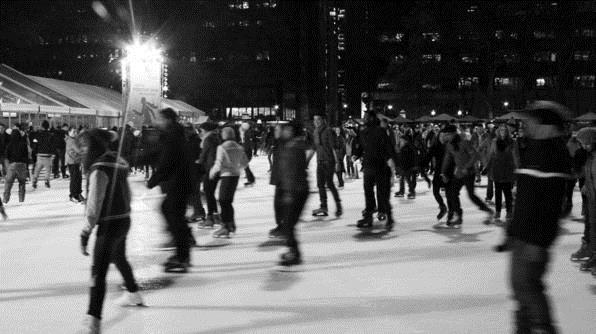 The Best of New York

New York Rocks at Christmas, but There’s Giving Too!

The magic of the holiday season is always pervasive in New York. From the Rockefeller Christmas tree, to fabulous themed store windows, retail bargains and sample sales. If shopping is your thing, it’s hard to go wrong in New York. Here are some of my favorites that won’t break the bank:

Outdoor Activities: Of course, the Rockefeller Christmas tree (50th and 5th), and up 5th avenue, look for amazing store windows (that have often been in the works for an entire year) to the world’s most famous toy store, FAO Schwartz at 59th and 5th, where you just can’t help feeling like a kid again. Window shopping is free, and terrific during the holidays. Santaland at Macy’s (34th and 7th) is another “don’t miss” location.

Skating at the Bryant Park Rink is free (though not skate rentals) and my favorite skating place in New York to go or to watch. I avoid the Rockefeller rink which is smaller, crowded and quite costly. Central Park is another option, but I still prefer Bryant Park at 42nd St and 6th avenue.

The special shopping sites that spring up for the holidays are good for unique, usually well priced gifts. Among the best are Columbus Circle, Chelsea Market, Grand Central Station, Bryant Park and Union Square Markets.

I can’t forget my family favorite, The Big Apple Circus which is presenting Luminosity a quintessential New York show which is a one ring circus with two amazing, entertaining hours straight through, at Lincoln Center’s Damrosch Park, Amsterdam and 62nd St., NY 10023. There may be promotional codes available if you sign up for theatreinnewyork.com, theaterdevelopmentfund.org or goldstar.com. (I also found discounted tickets at Goldstar for the Holiday Lights Double Decker Bus Tour if you’d rather ride than walk!)

Giving: Macy’s BELIEVE Campaign donates $1 to the Make A Wish Foundation for every stamped letter to Santa dropped off at a Macy’s Santa post office. Two especially worthy charities are CityMealsonWheels.org which helps feed our disabled and low income seniors, and CityHarvest.org which has come to the rescue of the tremendous amount of wasted food from our restaurants. If you have a coat hanging in your closet which is under used, a worthy recipient would surely appreciate the donation to NewYorkCares.org.

There is always lots more going on in NYC, so here are a few special destinations:

Janis Joplin: A Night With Janis. OK, All you Joplinites prepare for a true déjà vu. Those who did not love and respect Janis can give this a miss. Others prepare for a stunning evening recreated by Mary Bridget Davies. It does not focus on Janis’s  alcoholism or the drug abuse that was to kill her at age 27, but Davies has an uncanny likeness both physically and with her vocal performance of Janis that is unforgettable. At the Lyceum Theatre 149 W. 45th St., NY 10019 212 239-2949 (Set to close Jan 5).

Art: MOMA Magritte: The Mystery of the Ordinary 1926-1938 The Museum of Modern Art has a scheduled filled with interesting multimedia presentations. This exhibit is no exception, as Magritte challenged the real world with his images during this period ending just prior to WWII. He was full of thought provoking, imaginative and innovative images. If you can’t get to the MOMA before Jan 12 when the exhibit closes, the museum has built an extraordinary website of it. MOMA 11 W. 53rd St. NY 10019, 212 708-9400.

Film: ‘The Book Thief’: Already a major piece in the Epoch Times, this film deserves all possible kudos. Taking place in World War ll Nazi Germany, this film is a powerful reminder of the terror of those times. Young French Canadian actress Sophie Nelisse who is almost always on screen, gives a riveting performance as Liesel. Geoffrey Rush is extraordinary as her adopted father who shares her love of reading. Emily Watson also deserves credit as her adopted mother in this masterfully done work now playing at a theater near you.

Jazz/Folk: Pete Seeger, the legendary environmental activist and folk singer has been appearing in many venues since the passing of his beloved wife Toshi last summer. Among performances by Seeger include ECOFEST in Times Square, Farm Aid and numerous other benefits, including a recent appearance at Carnegie Hall with Arlo Guthrie and an upcoming concert with Woody Guthrie’s kids at Symphony Space January 17th, 2014. Though at 94 his voice is weak, his politics are as strong as ever. Symphonyspace.org, 2537 Broadway at 94th St. 212 81-5400.

Happy Holidays to all!