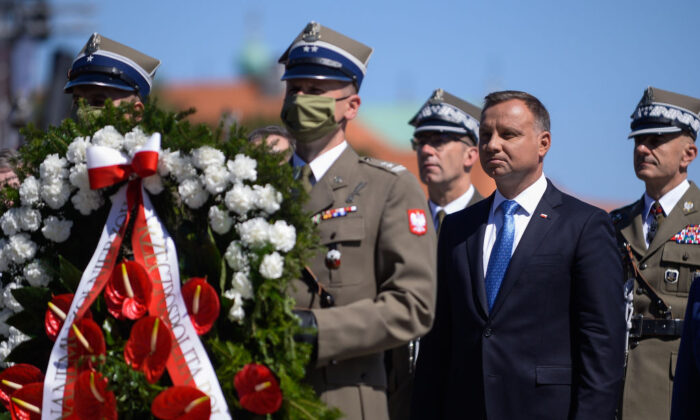 The President of Poland, Andrzej Duda takes part in the celebrations of the 100th Anniversary of the Battle of Warsaw on Pilsudski Square in Warsaw, Poland, on Aug. 15, 2020. U.S. Secretary of State Mike Pompeo was in attendance while visiting Poland as part of a tour of several eastern European countries. (Omar Marques/Getty Images)
Viewpoints

The Battle of Warsaw, a Hundred Years On

One hundred years ago, on Aug. 15, 1920, one of the most important yet forgotten events of the century took place on the outskirts of Warsaw. The Polish Army defeated the invading Red Army, in the Battle of Warsaw, and pushed back the Bolsheviks east.

This victory made Lenin give up on trying to spread communism beyond Soviet Russia, focusing instead on consolidating power domestically.

100 years ago, the Poles defeated the Red Army on the outskirts of Warsaw.

On the 15th of August, 1920 we did not just save Poland, we also saved Europe from the communist threat. #Victoria1920 🇵🇱 pic.twitter.com/SZy96FahP2

The U.S. Secretary of State Mike Pompeo travelled to Poland for this anniversary, not only to meet with key Polish leaders but also to pay homage to the Poles who defeated the communist enemy 100 years before.

Key topics discussed included 5G, how to stop Chinese and Russian malign actions, and, most importantly, the relocation of U.S. troops from Germany to Poland. Under the Trump and Law and Justice administrations, relations between the United States and Poland have significantly improved, with President Donald Trump personally attending the Three Seas Initiative summit in Warsaw back in 2017.

The Three Seas Initiative is one of the most important geopolitical projects of our time, an alliance of 12 Central and Eastern European states, centered on energy, infrastructure, and cybersecurity. This initiative is one of the cornerstones of U.S. foreign policy, with Pompeo pledging yet again that the United States is “ready to invest up to $1 billion in the Three Seas Initiative Fund to help protect [the region] against Chinese opaque lending practices.”

The member states of the Three Seas Initiative are keen to become independent of Russian energy sources, opting instead for U.S. LNG.

While in Warsaw, apart from strengthening U.S.–Polish ties, Pompeo also took part in the celebrations given in honor of the victorious Polish army in the Battle of Warsaw. On a side note, the Americans also played their part in the victory, with American volunteers taking part in the Polish–Soviet War. The most famous of the American volunteers was Merian C. Cooper, who founded the Polish Kosciuszko Squadron and then went on to pursue a successful career in the film industry, producing the 1933 classic “King Kong.”

The Polish–U.S. alliance is more crucial than ever, especially as the West is under threat, and alliances between conservatives can help stand up against the danger we face.

Ironically, the ideological threats do not come from the immediate east this time, but rather from an ideology that has grown within our countries and which has been clearly visible for the world to see in recent months in Seattle and Portland. It’s worth mentioning that this is supported by the subversive actions of a certain rival in world politics, located in the Far East.

The Polish Minister of Culture, Piotr Glinski has recently pointed out, “Western civilization has already fallen once. … The Roman Empire collapsed not only as the result of a barbarian invasion, but also because it lost self-confidence.”

Perhaps the West needs to look east, to Poland, and draw inspiration from the Poles on how to face off this ideological danger?

Stefan Tompson is a vlogger and filmmaker.