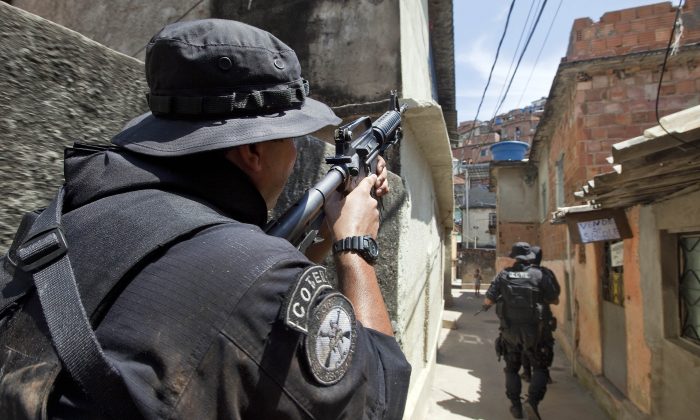 THE WAR CONTINUES: Coordination of special resources policeman covers his comrades as they patrol at Morro do Alemao shantytown in Rio de Janeiro, Brazil, on Nov. 29. Police scoured the sewers under Rio's sprawling slums Monday for hundreds of drug traffickers who fled an unprecedented military onslaught on the favelas (slums) that netted 40 tons of narcotics but few arrests. (Jefferson Bernardes/AFP/Getty Images)
Americas

The Battle for Rio

RIO DE JANERIO—Victory flags of Brazil and Rio de Janeiro are fluttering above the Complexo do Alemão (“German Complex”), the major battleground in Brazil’s all-out war against Rio’s powerful drug gangs. The Brazilian government launched a major offensive last week deploying 2,700 troops against the city’s three major drug gangs, who have for the first time bound together to fight the state.

The gangs own the slums in districts across Rio, their territory in what has been a perpetual state of civil war in Rio for a long time. On the one side stands organized crime, on the other underpaid, corrupt police. In the middle, are the citizens of the city.

Magdalene Eliene Dutra, 56, a government employee, says the government violence has “spread fear and insecurity,” but feels that gang violence has reached the extremes and so supports the government offensive. However, she says she is also “suspicious of abuse in the use of force by the police force.”

Drug-related crime in Rio are rife, but with the World Cup in 2014 and Olympics in 2016 approaching, the government presumably decided now is the time to wage the final war to wrest control of the city from the hands of the drug gangs.

“The reconquest of the territory of the Complexo do Alemão by the state is a fundamental and crucial step in the public safety policy we have set for Rio de Janeiro. But the work to ensure, once and forever, the right of the good citizens to come and go only just began. The medium-to-long-term main goal is to recover 30 years of neglect of poor communities,” said Sergio Cabral Rio governor in a published statement on Sunday.

Cabral was re-elected governor of Rio in October. According to the Electoral Court, Cabral received over 66 percent of the popular vote.

The governor created ‘Pacification Police Units’ (UPP) and installed them in slums to try to regain the territory for the state—the program was one of his main election platforms.

Then the major battle for Rio started.

The operation started by surrounding Complexo da Penha (Penha Complex) then moved to the Complexo do Alemão. Expelled from other slums by the UPPs, the traffickers fled and concentrated in this region, a area comprised of 10 districts, 40 slums and home to about 400,000 people.

“It is my commitment, I reiterate, pacify all communities where there is the domain of parallel power,” said Cabral in an official statement on Saturday.

Despite the war zone, the population appears largely supportive of the operations and optimistic, hoping that this time the government will be able to definitely free the city of drug trafficking.

But at the same time, there are questions if fighting gang violence with violence is the correct weapon, and if is enough to effect change in the long run.

“I do not believe in long-term changes. I think there should be treatment for drug users,” said Adel Pereira, 51, a resident of Rio, adding that a better public health infrastructure is the real change the government needs to make.

With additional reporting by João Felipe in Rio.