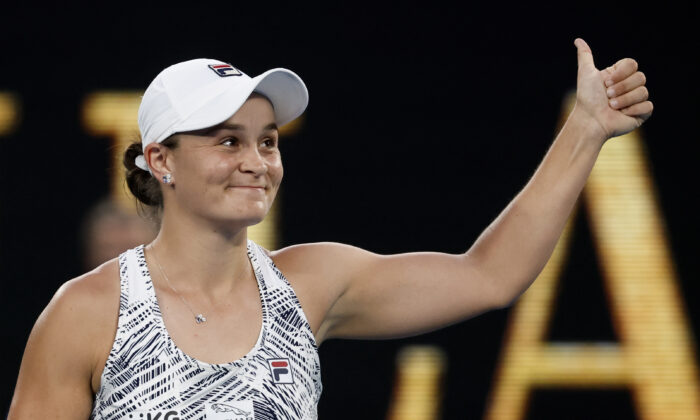 Ash Barty of Australia celebrates after defeating Jessica Pegula of the United States in their quarterfinal match at the Australian Open tennis championships in Melbourne, Australia, on Jan. 25, 2022. (Hamish Blair/AP Photo)
Viewpoints

The Barty Party Is Over, for Now

On 23 March, Ashleigh Barty shocked Australia and the international tennis community when she announced her retirement from the sport. This unexpected announcement comes a few weeks after her latest achievement, winning the Australian Open.

Soon after her historic win in Melbourne, I wrote an opinion piece for The Epoch Times in which I described Barty’s victory at the Australian Open as “a celebration of the indomitable human spirit.” I predicted that history would remember the tournament as a personal triumph of Ashleigh Barty, “the women’s champion who gave Australia its first victory in 44 years.”

Barty is the winner of three majors, the French Open, Wimbledon, and the Australian Open. For the last two years, she has retained a ranking of the Number One tennis player in the world. During her lucrative career, she amassed a fortune in prize money, nearly US$24 million.

Her announcement has been met with incredulity but generated many congratulatory messages from tennis players and even politicians.

As Barty is a public figure, it is relevant to ascertain why she has taken this unexpected step at the early age of 25.

When making her announcement, she said that “I’m so happy and I’m so ready, and I just know at the moment in my heart for me as a person, this is right.”

She explained that winning Wimbledon was a game-changer, the crown on a most successful tennis career, and the winning of the Australian Open was the cherry on the cake, considering that she was able to halt the 44-year drought of female Australian players who won that tournament.

Since Barty’s announcement, many people have applauded her decision, but some have expressed their sadness, even disappointment. They argue that it is simply too early in a person’s professional sports life to retire at the age of 25.

According to this view, people who possess exceptional skill and talent have an obligation to themselves, perhaps even a moral obligation, to fulfil their potential.

There is no doubt that Barty could have achieved many more tournaments, including grand slams if she were to seek the fulfilment of her untapped potential. There are always open-ended degrees of sporting excellence, for example, winning the U.S. Open Tennis Championships, which would enable her to complete her grand slams victories and remain the Number One player in the world for much longer.

This leads to the question of whether there is a moral obligation on people to seek the fulfilment of their potential?

Indeed, some philosophers, such as Immanuel Kant, have argued that there is an obligation to realise one’s potential because a failure to do this would make the world a poorer place.

Of course, Barty is entitled to make any career decisions that she feels are in her best interest. Hence, her decision to pursue other dreams should be respected, even if the international tennis world is saddened by her decision to retire from professional tennis.

Barty is engaged and probably wants to settle down and pursue other challenges, of which there are many.

However, there was a telling comment in her announcement that may disclose the real reason for her decision to retire. She said that she no longer has “the physical drive, the emotional want, and kind of everything it takes to challenge yourself at the very top level anymore.” Indeed, once the motivation and burning desire to compete at the highest level is lost, it is pointless to remain in a competitive sport.

Steve Milne reported in The Epoch Times that Barty told her friend, Casey Dellacqua, also a retired professional tennis player, that “her happiness wasn’t dependent on getting results, but rather success was knowing that she’d given everything she had.”

However, in this context, although a decision to retire is an intensively personal choice, one should not forget that people in Barty’s position also have an unexpressed, but nevertheless real, obligation to Australia. This is because she is one of our best ambassadors in the world. She is exporting excellence, determination, and sporting prowess which the world respects and values highly.

But the tennis community need not necessarily worry about Barty’s unexpected announcement. Indeed, it is not altogether unlikely that Barty might one day return to the sport. Barty retired once before to play professional cricket but returned to competitive tennis in 2016 to resurrect her career.

She reminds the tennis world of Kim Clijsters, the Belgian tennis champion, who retired a first time in 2007 at the age of 23 to marry basketball player Brian Lynch and become a mother, only to return to professional tennis after a hiatus of two years to win three more grand slams, including the Australian Open. She returned to the tour in 2020 a second time after having been retired for seven years, only to be defeated in the first round of most of the tournaments she had entered.

Perhaps, Barty will surprise us all in a few years with an announcement of a return to professional tennis. If so, she would still have many productive years of playing ahead of her and an ability to excel on the demanding international tennis circuit.

Although the Barty Party is over, for now, it may not turn out to be an indefinite and permanent severance from tennis. The tennis world can only hope that one day, Barty will return to complete her grand slam victories and delight fans around the world with her skill and elegance.