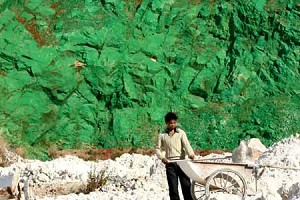 The hillside of Mt Laoshoushan is coated with green paint. Some of the villagers who inhaled paint fumes experienced symptoms of dizziness and shortness of breath. (Internet Photo)
China

The Barren Side of a Mountain Is Painted Green

Situated in Kunming City, a famous tourist destination in China, Mount Laoshoushan is completely barren after being quarried. Several months ago, however, the mountain's hillside was sprayed green with paint.

This was apparently done in order to adjust the feng shui (an ancient Chinese belief of harmonizing one's physical surroundings for maximum health and financial benefits) of a newly constructed County Committee office building of the Chinese communist regime.

On Feb. 13, 2007, The Dushi Times quoted villagers as saying that the quarry was established on Mount Laoshoushan about seven or eight years ago. Despite opposition from the local villagers, the quarry was not closed by the authorities until a few years later, leaving a barren hillside.

One villager said, “when the forest guard visited the village, all the villagers called on him to bring some saplings for plantation.”

Nonetheless, last July and Aug., over ten workers unexpectedly took paint to Mount Laoshoushan and sprayed the hillside. Many villagers were shocked when they overheard the workers saying that they did so simply for the purpose of adjusting the building's feng shui.

After receiving several hints from the workers, it dawned on the villagers that the office building of the Fumin County Committee of the Chinese Communist Party (CCP) stands just opposite the barren mountain.

The villagers reported that “over ten workers sprayed the mountainside for more than twenty days, and it consumed a truckload of paint.” Several thousand square meters of the barren mountain were sprayed green with paint, leaving empty buckets scattered arbitrarily in the bushes.

All the rocks and soil had to be sprayed with thick green paint. As estimated with the method explained by the paint manufacturer, it took 200 kilos of paint to spray an area of 1000 square meters, and it cost about 1620 yuan (US$208.9).

According to technicians at the Huitai Decoration Company, mountain soil is different from that found elsewhere. The absorbency of mountain soil is much better since part of the paint would penetrate into the soil after being diluted by dew and rainwater. As a result, the mountain needed to be sprayed multiple times before it was successfully greened. This is why it was sprayed for over twenty days in a row, and the amount of paint consumed was tremendous.

In addition, owing to geological changes and erosion resulting from rainfall, some soil may reemerge. In order to keep the mountain green, it will need to be coated with paint again and again. A villager was quoted as saying that, “If the money had been used to buy saplings, several barren mountains might have been restored.”

The director of the County's Forestry Bureau that initiated and carried out this painting project refused to offer any comments under the pretext of being busy. As for the head of the Kunming City's Forestry Department, he said that he could not make any comments on the “painting operation” due to the lack of a legal basis.

The villagers reported to the authorities that during the course of the spraying operation, the air was filled with a strange smell. Some of the villagers who inhaled paint fumes experienced symptoms of dizziness and shortness of breath. Some had such strong reactions that they stayed indoors for a period of time.

In order to improve the landscapes of cities in the past, some local governments had sprayed or dyed shabby looking spots, hillsides, and wilted grass. When Beijing was vying to host the 2008 Olympic Games, authorities had old buildings painted and withered grasses dyed with green paints; this was to leave a good impression on the visiting inspectors from the International Olympic Committee.