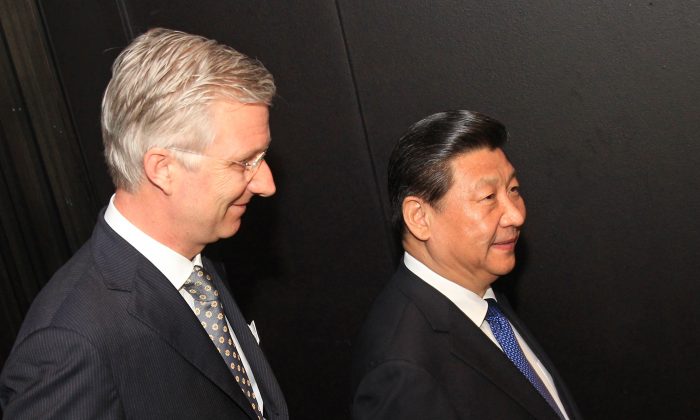 The Bamboo Curtain Between EU and China

Throughout history, perhaps no one traveled the Silk Road and toured China more than the great Venetian trader and explorer Marco Polo, whose legendary tale is still fondly told to this day. But he warned people: “I have not told half of what I saw.” While modern technology has turned the world into a more accessible global village, the gap between Europe and “the Middle Kingdom” remains, in many ways, as mystifying as ever.

Recently, China’s top leader Xi Jinping went on a “friendship” tour to some key EU member states, with an entourage of more than 200 business leaders and with a few multibillion contracts signed to buy airplanes and cars in France and Germany. While China’s state-run media Xinhua hailed the trip as a new chapter for cooperation between the EU and China, Europe looks still dubious whether to cozy up or stand up to China over a wide range of issues, unable to fully grasp what is behind “the bamboo curtain.”

Domestically, Beijing faces two formidable challenges simultaneously. First, on the economic side, Beijing reported that in 2014 China saw an increase of local government debt to almost $3 trillion, or 67 percent higher than in 2010. Such a surge has brought China’s total public debt, including money owned by the central government, to 58 percent of its $8.5 trillion economy. The fast expansion of banks’ lending has seen $15.26 trillion of credit created, and figures released in February showed that banks’ underperforming and nonperforming loans have risen to the highest level since the financial crisis.

Worse still, recent declines in manufacturing Purchasing Managers’ Index (48.5 in February) and exports worry Beijing deeply because such indicators mean loss of labor force as well as earnings from foreign currency—for now China remains an export economy, after all. Beijing’s official Gini Index number of 0.473 is well understated even according to Chinese economists. The alarming income gap in China remains a grave concern to its social stability. Most notably, the housing prices in major cities such as Shanghai and Beijing are among the highest in the world while GDP per capita in China ranks a dismal 91st in the world.

Second, the long-standing in-party struggle for power has seen its climax at its recent People’s Congress, amid widespread press reports of corruption and offshore bank accounts owned by senior communist leaders. The new leadership under Xi Jinping is attempting to consolidate its power base, while the communist old-timers remain in control of some critical branches such as propaganda, armed police, and judicial system. With over 100,000 group protests recorded per year, social justice is missing due to lack of rule of law. The slowdown of GDP growth, coupled with a tightly controlled Party state, will lead to further social unrest and polarizations, as noted by China watchers.

At this juncture, China needs help from the EU for multiple purposes. In 2013, with bilateral trade of $559 billion, the EU was China’s largest trade partner, while China is second for the EU, behind the United States. Europe supplies China with cars, planes, chemicals, and luxury goods, while Europe imports $385 billion worth of textiles, electronics, and other goods from China.

Despite such growing trade, China, the world’s second largest economy, is keenly wary of the EU in a number of ways.

First of all, for years, the EU has not yet recognized China as a full market economy and continues its arms embargo against Beijing, due to the bloody massacre of students on Tiananmen Square in 1989.

Second, China hopes to expand its exports to the EU to 1) keep its world manufacturing center status, 2) sustain its export-based economy for foreign currency earnings, 3) maintain its labor force in employment, 4) acquire technology and knowhow through foreign direct investment (FDI), and 5) use trade as leverage to maximize national interest in engaging with individual EU member states, including silencing the EU’s criticisms of its human rights abuses, such as the European Parliament’s resolution against China’s organ harvesting of Falun Gong practitioners and other prisoners of conscience.

In addition to economic means, China is also actively building up its soft power in Europe, via setting up many so-called Confucius Institutes on European university campuses and using such institutions to promote its propaganda schemes abroad.

The EU, on the other hand, is also not at all content with its $180 billion trade deficit with China last year, especially with import restrictions imposed in China, the largest market in Asia. With just over 2 percent of the EU FDI being in China, China has a low direct investment in the EU as well. Like U.S. investors, the EU countries find it impossible to participate financially in Chinese strategic sectors such as transportation, telecommunications, and health care.

Other grave business concerns on the EU side include China’s anti-dumping measures, its violation of intellectual property rights, and its practice of politicizing business deals. For instance, China’s purchase orders, either from France’s Airbus or from America’s Boeing, oftentimes depend upon which country’s president has just met the Tibetan leader.

In cases of trade disputes, such as a recent WTO decision against China on rare earth elements and other metals, professor Mark Wu of Harvard Law School said: “Although the WTO panel ruled against China, it did not require China to pay compensation. By design, the WTO’s remedies are not retrospective. … The main goal of WTO dispute settlement is to force compliance with the law rather than provide economic justice for past harm. The WTO, in effect, provides countries with a free pass to breach its rules temporarily. So long as a violating country ends its illegal policy in a reasonable period of time following a final judgment, it need not worry about being punished.”

In an authoritarian state where independent juridical system and free press do not exist, foreign investors will not likely seek a favorable or fair opinion from a Chinese court once a dispute arises, as many foreign companies have later found out. For example, in 2009, Groupe Danone of France was forced to exit the venture by selling its 51 percent stake in the Wahaha Group, one of China’s largest beverage companies.

In 2011, Italy, the world’s eighth largest economy, was reportedly seeking China’s help to bail out its national debt. A wiser strategy for Italy and other member states should be asking China to import more of the EU products, particularly given that China sits on an enormous foreign currency reserve of some $3.82 trillion, which comes in part from the trade deficit with Europe.

After all, the EU has the competitive advantage of producing some of the finest quality commodities in the world that are widely desired in China’s market. At the end of the day, it can’t be ignored that the EU, a union of democracies, is no longer dealing with a feudalistic China that Marco Polo once saw some 800 years ago.

Despite its economic reform effort, China is today still a communist dictatorship with the so-called Chinese characteristics, which politically sides with North Korea, Iran, Cuba, as well as with Russia, the largest military equipment exporter to China. Most notably, China remains silent on the Ukraine issue, despite its full awareness of the EU position on this matter.

In this era of digital technology, one still cannot access Facebook, Google, YouTube, or Twitter in China. In fact, one can be thrown in jail and even killed for being an adherent of the Falun Gong spiritual practice or a pro-democracy activist. The economic progress in the last 30 years has not turned China into a civil society governed by rule of law; instead it has beefed up a draconian regime that disrespects the international order and norms. There are still fundamental differences in the value systems between the democratic Europe and the Communist China.

The EU member states have no long-term interest to trade away their fundamental democratic principles, while seeking economic cooperation with the rising China. What is good for Europe and humanity at large ultimately is to see China become a democracy, not a tyrant dragon that will later bite the hand that feeds. At least for now, Europe and China are not heading forward on the same path, neither politically nor economically. A clear understanding of both sides beyond the bamboo curtain is essential to the success of meaningful trade and diplomacy.

Sun Tzu (544–496 BC), the infamous Chinese military strategist, wrote in “The Art of War”: “Know yourself and your enemy, you will win a hundred wars.” Will China be one day mainstreamed in the community of democracies? We all hope so and believe it will. But until then, Roman philosopher Lucius Annaeus Seneca (ca. 4 B.C.–A.D. 65) has offered us the best wisdom: If virtue precedes us, every step will be safe.

Erping Zhang is the director of Association for Asian Research in New York.