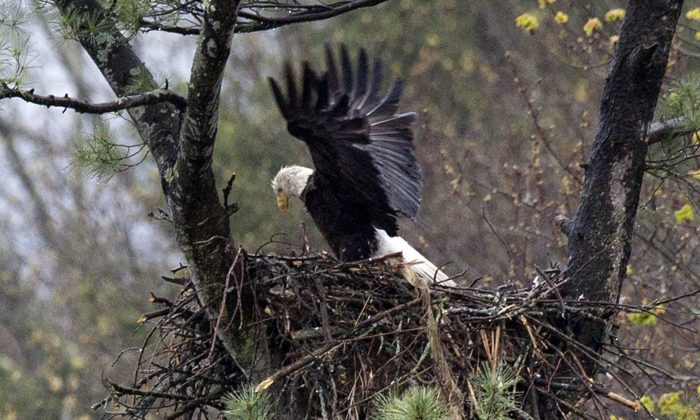 In this May 4, 2016 file photo, spring rain falls on an eagle stretching its wings while on the nest Hinsdale, N.H. Audubon Society bird counters found the number of bald eagles in 2015 were double the 1995 count. Some farmers and conservationists say the resurgence of the American bald eagle has come at a price. (AP Photo/Jim Cole, File)
US

The Bald and the Bold: Eagles’ Resurgence Comes at a Price

PORTLAND, Maine—The eagle has landed—on chickens and rare birds, with talons at the ready.

The resurgence of the bald eagle is one of America’s greatest conservation success stories. They have come back so strong that in some areas, they are interfering with efforts to preserve more jeopardized species, such as loons and cormorants, wildlife biologists say. And their proliferation is leading to encounters at livestock farms that sometimes end badly—and illegally—for the eagles.

Federal protections mean farmers can do little to keep them away, said Ken Klippen, a poultry scientist and former farmer who heads the National Association of Egg Farmers.

“It’s a fully protected bird. If you have foxes, coyotes, raccoons, a farmer can do something about that,” he said. “But if it’s a bald eagle? His hands are tied.”

The Pennsylvania Game Commission investigated a case in which an eagle was shot dead in the East Penn Township area in 2015. In Steuben County, New York, a sheep farmer and two other people were accused of poisoning sheep carcasses to kill eagles that threatened lambs. And authorities investigated suspicious deaths of 18 bald eagles in Maryland and Delaware last year.

Bald eagles were chosen as an American symbol in 1782 and underwent a steep decline in the early and middle 20th century, pushed to the brink of extinction by pesticides, habitat loss and indiscriminate hunting.

A 1930 issue of Popular Science stated that the birds had died off so much that it was possible they would soon “be seen only on coins and the coat of arms of the United States unless drastic action” saved them.

Such action came in the form of federal protections, including the 1940 Bald and Golden Eagle Protection Act, which prevents almost everyone from so much as disturbing the birds and still stands today. The eagles recovered so much that they were removed from the endangered species list in 2007.

Today, Audubon Society bird counts show their numbers are climbing, and scientists with the society say they will probably continue to do so. Counters found about 30,000 of them in 2015, more than double the 1995 count. They live in every state but Hawaii.

In Maine, where the breeding population of great cormorants is small and efforts to save them are underway, the bald eagles are a problem, said Chris DeSorbo, director of the raptor program at the Biodiversity Research Institute in Portland.

Cormorants are seabirds that are widely distributed around the globe, but North America has only a few breeding colonies from Maine to Greenland, according to the Cornell Lab of Ornithology. Common loons, decimated by hunting, also sometimes fall victim to eagles and are the subject of repopulation efforts in New England and elsewhere.

“Eagles are very opportunistic predators. They are going to try to take advantage of an easy meal wherever they can,” DeSorbo said. “In this case, I think seabird colonies can represent a low risk food resource for them.”

In other areas, the eagles are assuming a role they played centuries ago—agricultural pest. And it’s not just chickens they’re getting.

Lee Straw, a Maine farmer who raises sheep on an island, said his weaker lambs sometimes fall prey to eagles.

“There’s nothing you can do,” Straw said. “It’s survival of the fittest anyway.”

Such predation is to be expected because bald eagles are apex predators, said Mark McCollough, an endangered species biologist with the federal Fish and Wildlife Service. The service doesn’t consider it a problem, but rather indicative of the species’ success at rebuilding.

“Yes, eagles are having an effect on other species of wildlife,” he said. “But that’s natural. Predation like that probably occurred here hundreds of years ago.”

The birds are continuing to come back because of protection of wetlands, the increase in water quality and reforestation of farmland, said Geoff LeBaron, a Massachusetts ornithologist and the director of the Audubon Society’s annual Christmas bird count event. They haven’t yet reached the point where overpopulation is a legitimate concern, he said.

“At some point it will reach carrying capacity,” he said. “But I think there’s plenty of room for more eagles.”