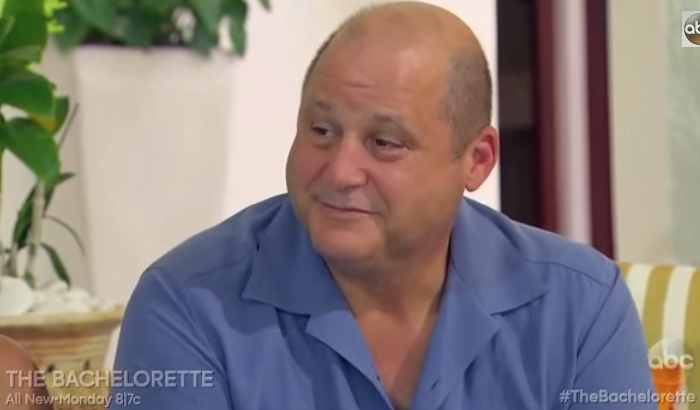 Andi Dorfman's dad, who will be shown meeting the remaining two Bachelors in the Bachelorette season 10 finale. (ABC)
Entertainment

The Bachelorette season 10 wraps up on Monday, July 28 with a two-hour season finale.

The remaining Bachelors Josh Murray and Nick Viall will each meet Andi Dorfman’s parents as she tries to choose the winner.

“Josh is the type of man Andi has always dated in the past–handsome, athletic and playful–but Andi is plagued with a nagging doubt that he may be too good to be true,” ABC says in the episode description.

“Her relationship with Nick is undeniably passionate and filled with an intensity she has never known, but she worries that it may be overwhelming. In this week’s dramatic conclusion, Andi is absolutely torn between the two men and can envision a future with both, but time is running out.”

A sneak peek of the finale, which was filmed ahead of time, shows Josh meeting Andi’s parents.

A video wasn’t released for Nick meeting Andi’s parents but the episode description says that Nick “is determined to ask Andi’s father for permission to marry his daughter.” But things get off “to a shaky start.”

Andi also goes on last dates with the men. She and Josh explore the coast of the Dominican Republic from the deck of a sailboat, and later he gives her a gift. Andi and Nick go off-roading and end up at a secret lagoon for a private swim. Nick gives Andi a gift as well.

After the finale ends, at 10 p.m. EDT, the After the Final Rose will air for one hour. The special is live, and will show Andi and the winner for the first time.