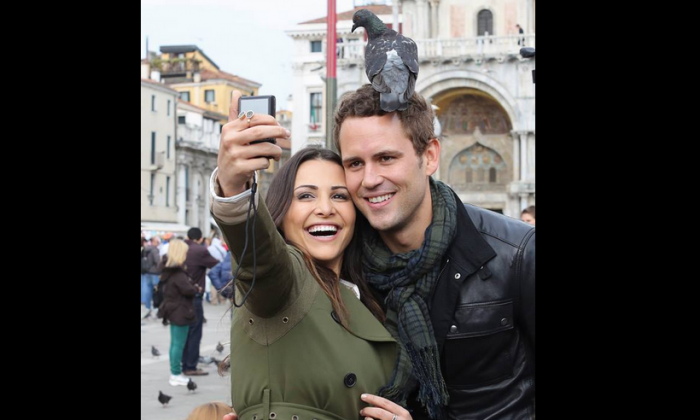 The Bachelorette 2014 is nearing its end and people are wondering whether Josh Murray or Nick Viall wins the competition and Andi Dorfman’s heart.

Many spoilers are indicating that Murray, the former baseball player, wins–and Viall loses.

Some of the strongest evidence of these results is several videos that appear to show Viall on a plane after the season was filmed, saying bad things about Murray and also expressing negative feelings about Andi.

The flight was on May 11, two days after the final rose ceremony, according to Reality Steve. Viall was on US Airways flight 3837 that departed from Charlotte and landed in Milwaukee.

Viall is on the phone talking to someone. One of the videos captures him discussing what he thinks about Josh:

Nick says that he “sensed it throughout the whole thing” that he was going to be eliminated at the end.

Another video shows Viall expressing his thoughts about the experience in general and Andi.

It’s unclear what he kept telling Andi, but he said: “I kept saying to her ‘I can’t wait til we’re in the real world … can’t wait til we get to do this stuff…we just go to, like, K-Mart and just chill … and don’t even have to worry about the this other stuff, you know?” he said.

… “And I just kept saying it, just ’cause I wanted…you know…and I said to her, I’m like ‘You don’t think I…’ and then, you know, instead of arguing with her I said, ‘You know what? I disagree.’ And I just left it at that…You know, I didn’t try to change her mind, I’m just like, ‘I disagree.'”

He also said that he did really enjoy meeting Andi’s family: “Oh, loved em.’ Love, love, loved her family. Great relationship with both her parents.”

… “We just…we just clicked…I mean, it was so funny because throughout the season, she had…I had her meet some of my friends (he’s talking about the hometown date of course since that’d be the only time she could meet his friends) and they asked her ‘What is it’ and she said, one of the first things she said to me, she’s like, ‘This is so easy with you … she’s like, ‘This is so easy with you…’ And ironically, she’s basically saying, ‘It’s too hard. I can’t do this.’ You know, which, really wasn’t …… 27 (he must’ve just been asked her age) … she’s basically like, ‘I’m scared [expletive].'”

… “No, nope, ummmm, I mean, she went back to what she’s used to … I mean, I don’t know how else to … I mean again…actions speak louder than words, like, I don’t know what else to say other than, like, it seemed like she really changed her mind, like, at the last moment.”

Reality Steve notes that the videos are pretty strong confirmation that Josh wins.

Meanwhile, Josh and Andi are reportedly still together, although they haven’t gotten married yet.

The Bachelorette season 10 finale is set to air on July 28. After the two-hour episode, the live After the Final Rose special will air.