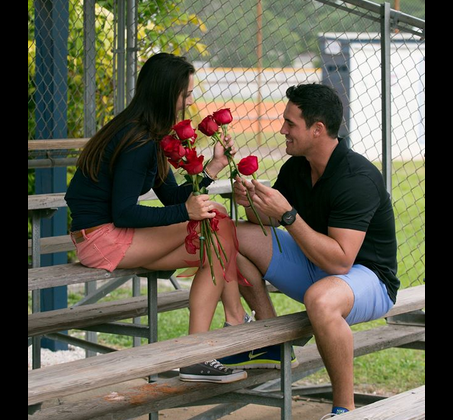 The Bachelorette 2014 Spoilers: Marcus Grodd Eliminated in Episode 8 as Andi Does Hometown Visits

The Bachelorette season 10 is nearing the end, with only four men left.

That would be Nick Viall, Chris Soules, Josh Murray, and Marcus Grodd.

Episode 8, slated to air on July 7, will have Andi Dorfman visiting the men in their hometowns and meeting their families.

She starts in Milwaukee with Nick, a software sales executive, touring a brewery and enjoying some energetic polka dancing.

ABC has revealed that Andi meets Nick’s large family–with 17 members–and that Nick tells Andi that he wants to get all of their approval of her. “She is even grilled by Nick’s nine-year-old sister,” it said.

Next, Andi goes to the small town of Arlington in Iowa to visit Chris, a farmer. They enjoy a tractor ride and romantic picnic, and also meet Chris’ family.

Andi visits Josh , a former professional baseball player, in Tampa, playing baseball at his childhood field and having a good time. According to blogger Reality Steve, Josh is the eventual winner of the show (it was all filmed before the season started airing).

Andi later visits Marcus, a sports medicine manager, in Dallas. Steve says that Marcus is the one who is eliminated.

ABC wrapped up its description:

“All four men and their families have touched Andi’s heart. As she heads back to Los Angeles, she is on cloud nine. But she and the four remaining bachelors are met with the most shocking news of the season: the tragic death of Eric Hill from a paragliding accident. Andi struggles to put on a brave face and along with the shaken men, push through the most emotional rose ceremony of the season. She says a heartbreaking good-bye to one stunned bachelor. The Bachelorette and her final three men prepare to leave for their last stop, the lush tropical island of the Dominican Republic.”