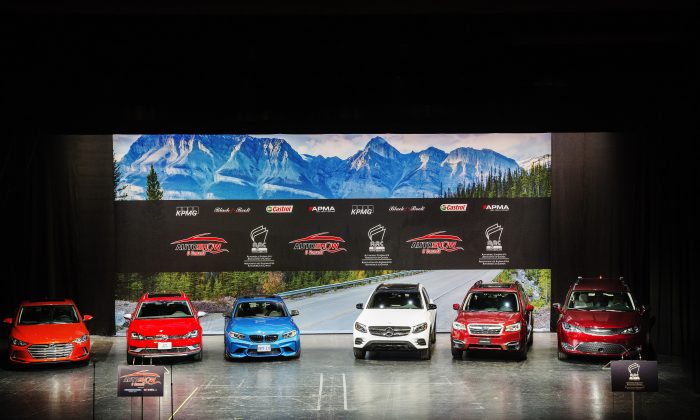 Toronto, Canada—On a cold, wintry February morning in the Metro Toronto Convention Centre just west of the city’s core, a few hundred people shuffled into seats within the intimate John Bassett Theatre. All were there to discover which automotive manufacturer would lay claim to one of two grand prizes: who would have bragging rights to the Automobile Journalists Association of Canada (AJAC) Canadian Car of the Year (CCOTY) and the Canadian Utility Vehicle of the Year (CUVTY). And, some were also in attendance to hear a brief keynote address by Aston Martin’s CEO, Andy Palmer who presented the unique concept, AM-RB 001. This was media day at the Canadian International Auto Show (CIAS).

Under the glare of harsh spotlights and additional flashes from cameras and video recorders of all sizes thanks to multiple media outlets, the event would also broadcast live to an anxious audience sitting at their breakfast table, viewing on a handheld device or on television.

To recap, eight “Best New” category winners were eligible for the top honours of Canadian Car of the Year and Canadian Utility Vehicle of the Year after they were announced on December 6, 2016. Then, Hyundai was a double winner, and other category winners included Volkswagen, Mercedes-Benz, Buick, Subaru, BMW, and Chrysler. The eight “Best New” categories cover the full new-model spectrum, including Best New Small Car, Best New Sports/Performance Car, and Best New Utility Vehicle. Most of these core categories are then further broken down into Small, Large, and Premium to cover a wide range of types of vehicles.

The category winners represent the voting results by the largest group of many of Canada’s best-known automotive journalists, who gathered this past October in Clarington, Ontario for the 32nd annual program—a four-day test-drive evaluation of brand-new or significantly changed models. The event, known as “TestFest,” was hosted by Canadian Tire Motorsport Park. “TestFest is the most intensive new-vehicle evaluation process on the planet,” said Gary Grant, co-chair of the Canadian Car of the Year committee. “No other organization employs such stringent testing methods to determine its award winners.” The rigorous testing program includes real-world driving on public roads, exactly where consumers drive, so the test data and vote results are directly relevant to potential car and utility vehicle buyers. The results are not based on the personal opinion of just one or two journalists. Instead, over 60 automotive journalists each drove vehicles in their categories back-to-back on the same day, under the same conditions, to ensure fair and objective comparisons.

“The AJAC program is absolutely testing-based,” Justin Pritchard, co-chair of the Canadian Car of the Year committee stated categorically. “We have experienced vehicle testers driving dozens of vehicles, back to back, over the course of several days. This testing process generated 1,384 test drives, producing over 100,000 data points and 1,058 category ballots. It’s important to note that every aspect of this testing data is ultimately shared online via our website, so consumers can see how any given vehicle performed in its category, or how it stacked up to the category winner.”

Then, the top three finalists in the two categories were announced on January 19, 2017 at the Montreal Auto Show.  The three finalists in each category of the two final categories were revealed by auditors KPMG and they were, (in alphabetical order) for Car of the Year: BMW M2; Hyundai Elantra; and, the Volkswagen Golf (Alltrack). For the 2017 Utility vehicle of the Year the finalists were: Chrysler Pacifica; Mercedes-Benz GLC 300 4MATIC; and, the Subaru Forester.

At this point, these category winners (with their initial scores factored in), are then re-scored against the overall scoring parameters, for the overall CCOTY/CUVTY winners by program auditors KPMG. To be clear, all results, at every phase of the competition, are completely unknown by any AJAC member, automotive manufacturer or the general public until such time as KPMG provide the results in an envelope—very much the same way as any major awards show.

So, when Daniel Ferman, representing KPMG, handed an envelope to both Gary Grant for the CUTVY and David Taylor for CCOTY, there was much anticipation.

The Subaru Forester claimed top honours when AJAC’s Gary Grant declared the 2017 Canadian Utility Vehicle of the Year by the Automobile Journalists Association of Canada (AJAC). “Subaru Canada is thrilled that the Forester has been selected as the 2017 Canadian Utility Vehicle of the Year,’ said Shiro Ohta, chairman, president and CEO of Subaru Canada. It is an honour that AJAC and its members recognize Subaru’s continued commitment to improvements in safety, performance and convenience.”

Moments later, David Taylor of AJAC announced that the Volkswagen Golf (Alltrack) had secured the most points and was proclaimed the 2017 Canadian Car of the Year. “It is such a great honour to have AJAC name the new Volkswagen Golf Alltrack as their car of the year. By adding our 4MOTION all-wheel-drive to the Golf SportWagen, Canadians now have a fantastic new alternative to choose from. Thank you so much to all the members of AJAC for this recognition,” said President and CEO of Volkswagen Group Canada Inc, Maria Stenström.

After initial jubilation by the two successful manufacturers, many scrum-like interviews occurred: soon the throngs cleared from the auditorium. It was time for the auto show to start in earnest with the first of multiple press events and unveilings throughout the day. Conceivably, future entries for the 33rd Canadian Car of the Year were waiting for their turn in the spotlight as journalists from around the world descended upon the often magnificent manufacturers’ booths.

At that moment, all six finalist vehicles remained on the stage, the Volkswagen and the Subaru in a prominent position at the front. Then the lights dimmed and the theatre descended into blackness.

Another successful event concluded after almost a year of planning.

As AJAC’s Justin Pritchard is fond of saying, “Data driven and Canadian expertise: that’s what makes an AJAC winner.”