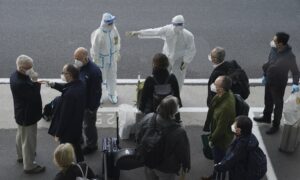 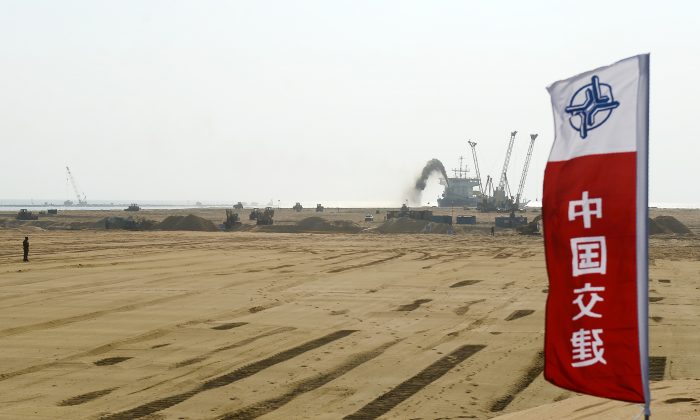 Pumps dredging sand at the site of a Chinese-funded $1.4 billion reclamation project next to the Colombo main sea port on January 2, 2018. China has several infrastructure projects planned as part of its "One Belt, One Road" initiative for spreading its geopolitical influence. (Lakruwan Wanniarachchi/AFP/Getty Images)
Chinese Regime

The Authoritarian Model Behind China’s ‘One Belt, One Road’

In April, Chinese defense minister Wei Fenghe announced in a meeting with a Pakistani naval chief that Beijing was open to providing “security guarantees” for its flagship economic investment project, the One Belt One Road Initiative (OBOR).

Wei’s statement furthered skepticism about the Chinese regime’s claim that OBOR is a civilian undertaking without political or military objectives.

Also known as the Belt and Road Initiative, OBOR was announced in 2013. It involves the investment of an estimated $4 trillion to $8 trillion, mostly in infrastructure such as roads and dams, to dozens of countries across Central Asia, Asia, and elsewhere.

OBOR attracts the governments of smaller countries that may not enjoy the wealth, political stability, or international reputation required to obtain loans under normal circumstances. The project has been criticized, however, for reinforcing corruption in countries with weak institutions, threatening democracy, and benefiting Chinese firms rather than serving local interests.

Many observers, analysts, and inhabitants of countries receiving Chinese investments have long held concerns that OBOR is little more than China’s bid to build an international power bloc by deploying its economic weight in smaller, less-developed nations, then subverting their institutions to serve the policy interests of the communist autocracy.

More ominously, the Chinese Communist Party’s development of advanced police technology and surveillance methods could more easily proliferate to other repressive regimes if they are already closely engaged with Beijing on an economic basis.

In Malaysia, a Southeast Asian country where Chinese state-backed firms have invested over $30 billion in various projects, including a coastal railway and gas pipeline, a recent election has seen the rise of 92-year-old prime minister Mahathir Mohamad, who successfully ousted the ruling party of 60 years.

Mohamad’s campaign ran on a platform of anti-corruption and skepticism of heavy Chinese investments, including the expensive “Forest City” real estate initiative where most buyers were not locals but Chinese.

On May 16, the Financial Times quoted Euben Paracuelles, an economist working in Singapore for Japan’s Nomura Securities, who said that Mahathir’s election could reshape the way Malaysia handles Chinese influence.

“It is hard to say if projects will be cancelled but, at the minimum, they could face fairly significant delays, with no new projects approved for the time being,” Paracuelles told the Financial Times.

The Chinese regime faces growing civil unrest and political instability as GDP growth decelerates. Catalysts to these internal challenges are actions taken by foreign governments, such as heavy import tariffs proposed by President Trump to correct past trade imbalances, or growing wariness of the CCP’s military strength, reflected in souring relations between Beijing and neighboring countries such as Japan, Vietnam, and India.

According to Xie Tian, a professor of business at the University of South Carolina Aiken, the Chinese regime is taking its substandard labor protections and industrial overcapacity abroad to build up geopolitical strength in Asia.

“In fact, the CCP is exporting its communist ideology and communist system of rule,” Xie said in an interview with The Epoch Times.

In time, weaker states folded into the Chinese economic orbit would effectively be tributaries dependent on Beijing’s good graces, allowing the CCP to enlist their help in removing the influence of the United States and its allies from East Asia, Xie said.

“By expanding outwards, the CCP can flaunt its nationalist credentials at home,” Xie said.

Zeng Jianyuan, a scholar of national development at the National Taiwan University in Taipei, said that the Chinese regime faces an environmental crisis and resource shortages, and therefore internal unrest.

“Right now China is trying to continue its expansion and development,” Zeng said. “By investing in small underdeveloped Asia-Pacific countries that have no way of paying off their loans, the CCP can guarantee lasting control over the bountiful strategic resources these countries possess.”

By plying an OBOR partner nation with large investments, Beijing will be able to extract concessions should the local government default, as happened in Sri Lanka last December. When the Sri Lankan government found difficulty paying off a $1.5 billion debt it owed Chinese investors, it leased the strategic port of Hambantota to a major Hong Kong-based Chinese firm for 99 years.

While the Sri Lankan government has issued assurances that Hambantota would not be used for military purposes, Chinese defense minister Wei’s recent statement suggests that Beijing is keeping its options open.

Other countries, such as Laos, Myanmar, the Philippines, and Pakistan—all which have authoritarian-leaning governments—have accepted heavy Chinese loans. They are also located in regions where the CCP has considerable interests, such as the disputed South China Sea, where the Chinese military has been increasing its presence in violation of international arbitration.

In the Indian Ocean area, developing Chinese regime influence in countries like Sri Lanka, Myanmar, Bangladesh, and Malaysia threatens the geostrategic security of India. Pakistan, a long-time Chinese partner and a nuclear power, is heavily engaged in OBOR projects.

During the Cold War, the Soviet Union led an alliance of ideologically affiliated communist regimes and satellite states in opposition to the capitalist world. Perhaps drawing a lesson not to engage in open ideological combat with the rest of the world, the Chinese Communist Party represents its foreign relations and international aims as pragmatic and development-oriented.

Propaganda from Chinese and outside sources have long contrasted China’s approach with the  foreign policy of the United States, which, as the effective custodian of international law and order, has been saddled with extensive accusations of hegemony, imperialism, and other depredations.

Meanwhile, the superficial lack of an ideological or military component to One Belt One Road and other Chinese investment projects obfuscates the nature of Beijing’s strategic calculus.

At the end of the 20th century, many in the Western world harbored hopes that communist China would inevitably move towards political change as long as it opened itself to the outside world via market-oriented reforms.

Throughout the 1990s, the United States granted China favorable trade relations, aiding Chinese economic growth and technological development. But instead of liberalizing, the Chinese Communist Party doubled down on its systematic repression of dissidents, ethnic minorities, religious groups, and other aspects of civil society.

Meanwhile, what the CCP calls “socialism with Chinese characteristics”—the pairing of capitalism with autocracy—has fostered rampant systemic corruption and severe economic imbalances. A massive property bubble and increasing public debt threaten a financial crisis; a preponderance of capital locked up in state enterprises or in firms closely connected with the Party has led to industrial overcapacity on a wide scale.

In the worst case, the CCP risks international isolation and economic stagnation, something that characterised the Soviet Union in the final days of the Cold War and prior to the USSR’s economic, then political collapse.

In Central Asia, a region formerly part of the Soviet Union, OBOR has been associated with the corruption of local elites. In an analysis published in Hong Kong’s South China Morning Post last May, it was mentioned that Chinese investors often smoothed their deals with bribes.

Zeng Jianyuan, the Taiwan academic, holds that the Chinese regime would prefer its neighbors be bribery-prone autocracies, rather than independent, clean democracies.

“To ensure the stability of its own political authority, the CCP doesn’t want to see surrounding countries challenge the authoritarian system or undergo color revolutions, which are things that could affect mass sentiment in China,” Zeng said. “The CCP’s aim is to have its neighbors’ politics and economics under control.”