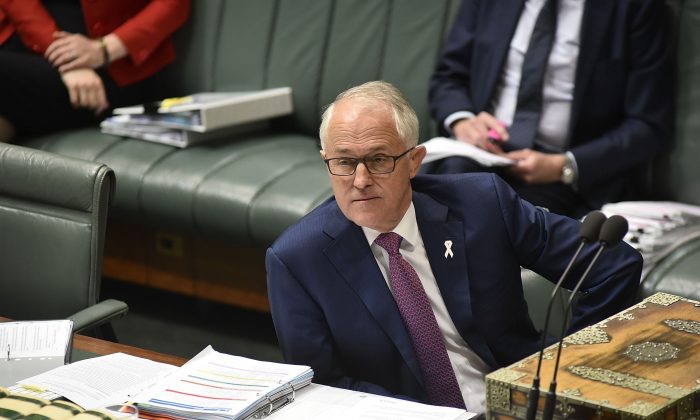 On Dec. 9, Australian prime minister Malcolm Turnbull responded to claims by the Chinese regime and opposition politicians that he had made “China-phobic” remarks and was catering “to irresponsible reports.”

The backlash comes after Turnbull raised concern about widespread and high-placed infiltration of Australia’s government and society by agents serving the Chinese Communist Party.

“Foreign powers are making unprecedented and increasingly sophisticated attempts to influence the political process,” Turnbull told reporters in Canberra, the Australian capital, on Dec. 7 as he pushed for legislation that would more strictly regulate Chinese individuals and firms attempting to sway Australian politicians using donations and other incentives.

On Dec. 8, a spokesman for the Chinese regime said that Beijing was “astounded by the relevant remarks of the Australian leader. Such remarks simply cater to the irresponsible reports by some Australian media that are without principle and full of bias against China.”

For months, Australia media and state bodies have been scrutinizing the Chinese regime’s attempts to spread political influence within Australia’s borders, from the communist tactics of coercion used to subvert the large Chinese-Australian community to the funding of well-placed politicians.

‘The Australian People Stand Up’

“Foreign governments are entitled to make their point of view known,” Prime Minister Turnbull said on Dec. 9. “But covert lobbying, particularly of the kind we’ve seen recently, that is not acceptable and we’re updating our laws to deal with it.”

On Dec. 7, Turnbull had presented a set of bills to parliament designed to counter influence by foreign governments in Canberra.

A recent report by Australian intelligence said that that China has been running a “patchy but deep” operation to insert friendly politicians and other public figures into positions of influence.

Responding to Beijing’s “strong dissatisfaction,” to his earlier statements, Turnbull referenced a quote by founding Chinese communist leader Mao Zedong, who said, “the Chinese people have stood up.”

“So we say ‘the Australian people stand up,’” Turnbull said, speaking in unpolished Mandarin.

Turnbull’s new laws would introduce the criminal offense of intentional foreign interference, covering situations where a political or state process is covertly or deceptively influenced on behalf of a foreign client.

One of the Australian politicians who has found himself in the spotlight is Senator Sam Dastyari of the left-leaning Labor Party. Dastyari was sponsored by Huang Xiangmo, a Chinese billionaire with ties to the Communist Party.

Because of his conflicts of interest, Dastyari was demoted from his position as opposition deputy whip in the Senate and the government is now calling for his removal from parliament. Turnbull has called his actions a “failure of loyalty.”

Dastyari was long viewed as suspiciously close to China, but it wasn’t until late November that audio recordings showed he had once met Huang Xiangmo and told him his phone was possibly being tapped by Australian intelligence.

“Sam Dastyari is a very clear case of somebody who has literally taken money from people closely associated with the Chinese government and, in return for that, has delivered essentially Chinese policy statements,” Turnbull said on Dec. 9.

Opposition politicians have criticized Turnbull, accusing him of Sinophobia and burning bridges in the country’s relationship with Asia and Asian-Australians.

Kristina Keneally, a Labor Party politician, said Turnbull was fueling suspicion of Asian-Australians and was “more interested in his own day-to-day survival than Australia’s future relationships in Asia.”

“It’s not just Chinese-Australians, but Korean-Australians too who know they’re getting tarred by Malcolm Turnbull’s assertion that Asian-Australians are not fully-fledged members of Team Australia,” Keneally said.

Kristina Keneally is currently running for a parliamentary representative seat in a tight race against the prime minister’s Liberal Party in Bennelong, New South Wales. Keneally once served as premier of New South Wales, and Sam Dastyari was formerly the Labor Party’s general secretary for the state.

‘Friend of the Chinese People’

Turnbull rebuked assertions he was anti-China, pointing to his granddaughter, who is half-Chinese by descent. “To suggest that somebody whose granddaughter is one of those one million Australians of Chinese ancestry, is anything other than a friend of Chinese people is absurd, completely absurd. It just shows you how desperate they are,” Turnbull said.

Links to China, whether the people or its ruling Communist Party, can be found among the Liberals as well.

According to Labor Party representative Anthony Albanese, Liberal members of the Australian parliament had also received sponsorship from Chinese sources.

“We found out that a notice had gone out asking people to attend a fundraiser for the Liberal party where the guest speakers weren’t Liberal party ministers or shadow ministers, they were representatives of the Chinese government.”

Bill Shorten, Labor leader in parliament, suggested that Turnbull was using strong rhetoric against the Chinese regime to strengthen his political position against Labor.

“I wish that Senator Dastyari hadn’t given him the ammunition to do some of those attacks,” Shorten said.

Alex Turnbull, the prime minister’s son, is married to Chinese-born Yvonne Wang. According to Christopher Joye of the Australian Financial Review, the elder Turnbull was skeptical of Australian intelligence, a sentiment “reciprocated in spades with Australian and US spooks insinuating Malcolm is soft on national security and the China threat while noting his Sinophile son is married to the princeling daughter of senior Chinese Communist Party officials.”

The accusation that the younger Turnbull’s wife was the daughter of Chinese regime officials was later removed from Joye’s article upon complaints by the prime minister’s family.

Experts say that China’s diplomatic goal is to threaten and coax Australia out of its alliance with the United States. Doing so would make it easier for the communist regime to advance its strategic interests across Asia, in hotspots such as the South China Sea or Taiwan, which Beijing sees as its own territory.

In 2016, the Global Times, a Communist Party-controlled Chinese tabloid, ran an article chiding Australia for opposing China’s claims to the South China Sea—most of which is legally part of international waters.

“Australia is not even a ‘paper tiger,’ it’s only a ‘paper cat’ at best … Australia has unexpectedly made itself a pioneer of hurting China’s interest,” the Global Times said. “If Australia steps into the South China Sea waters, it will be an ideal target for China to warn and strike.”

Malcolm Davis, senior analyst with the Australian Strategic Policy Institute, told The New Daily that Australia could not let itself be pushed around by China.

“Our population is changing. In 20 to 30 years time, we’ll be a more diverse and multi-cultural population that will include Chinese and other ethnic components,” Dr. Davis said. “China hopes to influence the future Australian population in people who are young, coming into the political scene and over time [want to] cultivate this influence.”

The prime minister would appear to agree: Australia needs to maintain a strong atmosphere of sovereignty and political openness.

On Dec. 5, when Turnbull brought out his new laws, he said that “what Labor is doing with Dastyari will result in nothing more than complete contempt of Australia and particularly the Australian Labor party in Beijing.”