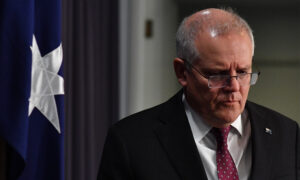 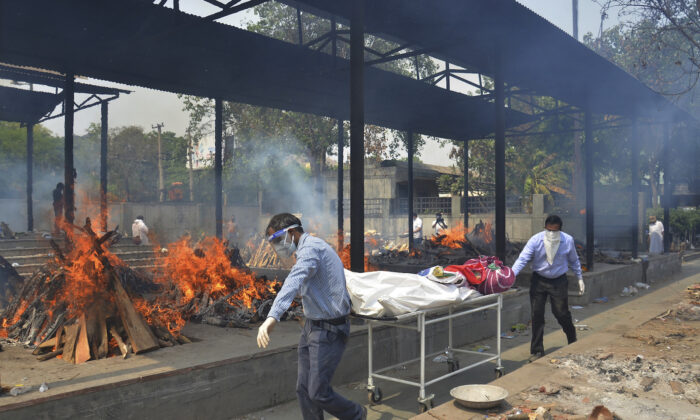 Relatives carry the body of a person who died of COVID-19 as multiple pyres of other COVID-19 victims burn at a crematorium in New Delhi, India on May 1, 2021. (Amit Sharma/AP Photo)
Viewpoints

The Australian Government Is an ‘Equal Opportunity’ Offender of Civilian Rights

Australians stuck overseas should not feel unwelcome to return home. Yet, from this week, any citizen flying back from India must contend with sanctions. The maximum penalties include a $66,000 fine or a five-year jail sentence.

It is the first time in Australian history that a government criminalises its citizens for attempting to return home.

Yet, Prime Minister Scott Morrison has refused to back down on the measure, arguing that it is necessary to use “emergency powers under the Biosecurity Act to protect Australia’s health services and quarantine program.”

The prime minister has also dismissed accusations from Greens Party leader Adam Bandt that he is “racist” for imposing travel bans on those returning from India.

Of course, such accusations are profoundly unfair because, when it comes to breaches of rights, the government is more of an “equal opportunity” provider.

Prior to the COVID-19 outbreak, the seminal Legal Rights Audit 2019 argued that 381 separate provisions had breached our fundamental rights via Acts of Federal Parliament.

During the pandemic, the federal government restricted the right of citizens to leave the country without an exemption, of which few are granted.

Although this is a nation of immigrants who have many friends and relatives overseas, including parents and children, the government oversees a regime that has shut down international travel and enforces prohibitions that carry a whiff of authoritarianism.

However, this may be nothing compared to the situation of the 37,000 Australians still overseas.

Hundreds have posted Facebook messages to express the necessity of returning home, including to care for ill or dying relatives, because of losing their work or homes, or that the toll of being separated is “overwhelming.”

“Essentially, you have a humanitarian disaster all around the world that Australian citizens are stranded in terrible conditions,” argues Joseph Forgas AM, a psychology professor born in Hungary and migrated to Australia at 22 years of age as a refugee from communism.

Although he obtained special permission to attend his mother’s funeral in Hungary, Forgas was unable to reunite with his wife and children in Australia.

“My human rights are being violated. I am deeply disappointed, and I believe the Australian government has caused an immense damage to the country’s reputation,” he said.

There are now an estimated 9,000 Australians in India, 600 of whom are classed as vulnerable. One Australian travelled to India to attend his father’s funeral but is now concerned he will be separated from his wife and two daughters who live in Adelaide indefinitely. For such an individual travelling to mourn his own father’s death, more compassion is needed.

A couple in their 70s were holidaying in the UK when the pandemic hit and have been trapped for almost a year without substantial assistance from authorities.

There is also the Ph.D researcher who was unfortunate enough to attend a conference in Dublin, Ireland, in March last year. She ended up having to stay for several months in the UK, with no job or stable accommodation. She sought help from Australian High Commission in London, which told her to contact a local council about homeless accommodation.

Some Australian politicians have even raised the idea of stopping Australians from returning altogether.

During Western Australia’s recent lockdown, State Premier Mark McGowan sought to attribute blame for the spread of the virus to individuals rather than scrutinise the faults of his state’s quarantine system.

Apparently, he is “furious” that some Australians still dare to travel overseas and blamed the federal government for allowing “too many Australians” to do so.

International laws dictate a citizen’s right to freedom of movement coupled with the right to return home. The latter is a principle most commonly invoked in refugee cases. Indeed, the International Covenant on Civil and Political Rights (ICCPR), to which Australia is a signatory, states that no one shall be “arbitrarily deprived of the right to enter his own country.”

For this reason, the UN Human Rights Committee, which oversees the implementation of the ICCPR, last week raised “serious concerns” about the Morrison government’s decision to ban its own citizens from returning home.

Committee spokesperson Rupert Colville stated, “The UN Human Rights Commission … has emphasised the narrow authority to refuse nationals’ return, and considers that there are few if any, circumstances in which deprivation of the right to enter one’s own country could be reasonable.”

Amid these travel bans, it does appear that, after all, some people are actually “more equal than others.”

It is a two-tiered system where the more powerful and famous can receive special treatment compared to ordinary people.

For example, in the same week the government began halving arrival caps for Australians, citing the threat posed by the UK variant of COVID-19, it allowed more than 1,700 tennis players, their staff and others to enter the country for the Australian Open tennis tournament.

The prime minister contends that the cap to Australians returning home must continue because the quarantine systems cannot handle the influx of arrivals.

However, Hollywood seems to have been exempt. As reported, “It began with Zac Efron. Then Mark Wahlberg flew over, Matt Damon jetted in, and a dozen other celebrities followed, all to set up temporary homes in Australia.”

These celebrities can come and freely enjoy our beaches, bars, and nightclubs, particularly in Sydney. Meanwhile, at least 37,000 Australians are trapped overseas, desperately waiting to return home.

The government needs more political will and compassion to help its citizens. When it comes to breaches of fundamental rights, the Australian government is not “racist” but rather an “equal opportunity” provider!

Augusto Zimmermann is a professor and head of law at Sheridan Institute of Higher Education in Perth. He is also president of the Western Australian Legal Theory Association, and a former law reform commissioner. He co-edited the “Fundamental Rights in the Age of Covid-19” (Connor Court / The Western Australian Jurist, 2020)