The Art of War: How Trump Gained Significant Leverage With Declassification Order 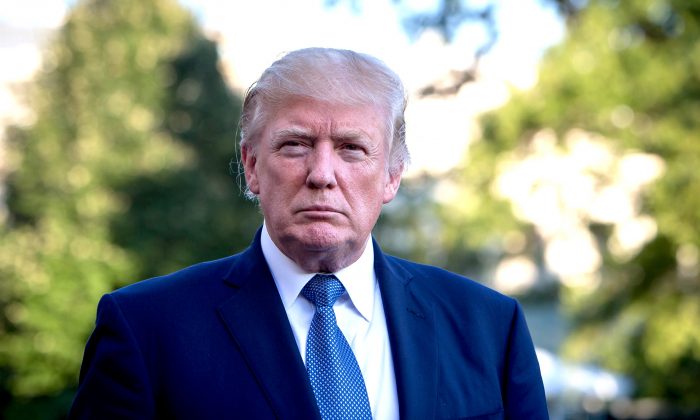 President Donald Trump at the White House on Sept. 24, 2017. A declassification order of documents related to the Russia investigations and the spying on the Trump campaign has given him significant leverage. (Samira Bouaou/The Epoch Times)

Last night President Trump made a brief but very important disclosure during a live interview with Sean Hannity while at a rally in Las Vegas. Hannity asked the president about the pending release of declassified documents. Here is how the president responded:

Well, we’re moving along, we’re working along. We’re also dealing with foreign countries that do have a problem. I must tell you. I got called today from two very good allies saying, “please, can we talk.” So, it’s not as simple as all that. And we do have to respect their wishes. But it will all come out.

This morning President Trump sent out a series of tweets on the subject, providing further information:

I met with the DOJ concerning the declassification of various UNREDACTED documents. They agreed to release them but stated that so doing may have a perceived negative impact on the Russia probe. Also, key Allies’ called to ask not to release. Therefore, the Inspector General…..

….has been asked to review these documents on an expedited basis. I believe he will move quickly on this (and hopefully other things which he is looking at). In the end I can always declassify if it proves necessary. Speed is very important to me – and everyone!

An order for declassification, particularly one as potentially broad as this, touches on many different aspects.

In a previous article, I noted that the declassification process was more complex than commonly thought. Politics aside, there are four different elements at play. And they all relate directly to President Trump’s Declassification Order.

First, there is the ongoing process of the declassification order itself.

Second, there is the ongoing preparation of the DOJ Inspector General’s report on FISA abuse, which was announced on March 28, 2018.

A third element is the involvement of certain U.S. allies—almost certainly Britain and Australia—with the FBI and CIA in the events leading to the establishment of the FBI’s Counterintelligence Investigation.

Finally, we have the ongoing investigation by Special Counsel Robert Mueller.

Besides the ongoing investigation by the Inspector General into potential FISA abuse, he has also at least two subset investigations stemming from his June 2018 report: “A Review of Various Actions by the Federal Bureau of Investigation and Department of Justice in Advance of the 2016 Election.”

As part of these ongoing investigations, classified information the Inspector General is using or pursuing must be protected until the conclusion of his investigations. This has almost certainly caused an inherent conflict with the declassification order issued by President Trump.

The Inspector General’s focus in his most recent, and ongoing, investigation is very specific:

A review that will examine the Justice Department’s and the Federal Bureau of Investigation’s (FBI) compliance with legal requirements, and with applicable DOJ and FBI policies and procedures, in applications filed with the U.S. Foreign Intelligence Surveillance Court (FISC) relating to a certain U.S. person.

As part of this examination, the Office of Inspector General (OIG) will also review information that was known to the DOJ and the FBI, at the time the applications were filed, about an alleged FBI confidential source. In addition, the OIG will also review communications the agencies had with the alleged source as it relates to the FISA applications.

The “certain U.S. person” mentioned is former Trump campaign adviser Carter Page. The “alleged FBI confidential source” is Christopher Steele, the former MI6 spy who was hired to produce the controversial dossier on then-candidate Donald Trump. Another related source is FBI informant Stefan Halper, who will probably come up as part of the IG Investigation.

The Inspector General himself needs to pursue a path of declassification prior to releasing any detailed report. The fact that his finalized reports are primarily public require declassification of information being released (classified appendices are sometimes attached).

It appears more likely that the Inspector General will now be responsible for releasing many—if not all—of the items President Trump specified in his declassification order. As President Trump noted in his tweet, if he is not happy with the results, he can always change course and declassify the documents himself.

In relation to our allies, any information subject to declassification that pertains to foreign intelligence or to the allies themselves would almost certainly result in high-level discussions. In this particular case, it would appear these discussions were of such concern that they resulted in phone calls from two of our allies at levels high enough to reach President Trump directly.

These phone calls are telling and likely confirm that British and Australian Intelligence were both involved in the events leading to the establishment of the FBI’s counterintelligence investigation.

Luke Harding, of the Guardian, has previously reported on the involvement of UK Intelligence, noting that Britain’s Government Communications Headquarters (GCHQ) was involved in collecting information and transmitting it to the United States:

In late 2015 the British eavesdropping agency, GCHQ, was carrying out standard “collection” against Moscow targets. These were known Kremlin operatives already on the grid. Nothing unusual here – except that the Russians were talking to people associated with Trump. The precise nature of these exchanges has not been made public, but according to sources in the US and the UK, they formed a suspicious pattern. They continued through the first half of 2016. The intelligence was handed to the US as part of a routine sharing of information.

In the summer of 2016, Robert Hannigan, then-head of Britain’s GCHQ traveled to Washington to personally meet with then-CIA Director John Brennan:

That summer, GCHQ’s then head, Robert Hannigan, flew to the US to personally brief CIA chief John Brennan. The matter was deemed so important that it was handled at “director level,” face-to-face between the two agency chiefs.

Feinstein: Over the spring of 2016, multiple European allies passed on additional information to the United States about contacts between the Trump campaign and Russians. Is this accurate?

The BBC reported that Brennan’s involvement may have gone back to April 2016:

Last April [2016], the CIA director was shown intelligence that worried him. It was – allegedly – a tape recording of a conversation about money from the Kremlin going into the US presidential campaign.

It was passed to the US by an intelligence agency of one of the Baltic States. The CIA cannot act domestically against American citizens so a joint counter-intelligence taskforce was created.

The taskforce included six agencies or departments of government.

Brennan would later refer to this task force during an interview with MSNBC’s Rachel Maddow.

The Guardian reported on speculation that Hannigan’s resignation was directly related to UK Intelligence sharing:

His sudden resignation – he informed staff just hours before making this decision public – prompted speculation that it might be related to British concerns over shared intelligence with the US in the wake of Donald Trump becoming president.

The Australian involvement comes courtesy of diplomat Alexander Downer through his meeting with Trump campaign foreign policy adviser George Papadopoulos. It was this meeting, supposedly relayed by Australian intelligence to the FBI in late July 2016 that has been reported as the reason leading to the FBI’s Counterintelligence Investigation on July 31, 2016.

Downer, who has long-standing ties to UK intelligence, served on the Advisory Board of private UK intelligence firm Hakluyt from 2008-2014. He reportedly still maintains contact with Hakluyt officials.

Stefan Halper, the outed FBI spy, also has connections to Hakluyt through Jonathan Clarke, with whom he has co-authored two books. Clarke is the U.S. Representative–Director U.S. Operations for Hakluyt.

There are many other interlaced ties. Sir Richard Dearlove, the former Head of MI6, is associated with nearly every foreign intelligence member mentioned.

It was Dearlove who advised Christopher Steele and his partner, Chris Burrows, to work with a top British government official to pass along information to the FBI. Dearlove knows Stefan Halper through their mutual association at the Cambridge Intelligence Seminar. Dearlove also knows Sir Iain Lobban, a former head of GCHQ, who is an Advisory Board Member at Hakluyt.

These ties appear nearly endless and illustrate why there should be reason for real concern on the part of current British and Australian foreign intelligence officials.

George Papadopoulos on Thursday sent out an attention-grabbing tweet:

The British and Australian governments’ attempt to sabotage the Trump campaign is about to backfire in a spectacular fashion.

Today, he followed up with this:

After reports are finally out that the British and Australian governments were actively spying and trying to sabotage the Trump campaign, those two governments called the president to ask for him not to declassify any FISA documents. Strange.

Underlying all of the noise appears to be an effort on the part of the DOJ to control the manner in which information becomes public. After President Trump issued his order for declassification, both the DOJ and two of our allies made their case to limit or delay the release of that information.

In exchange for backing away from his immediate declassification request, President Trump has pushed the Inspector General’s Report to the forefront with an accelerated time-frame for its release.

Should the IG report prove less revealing, or more drawn out than is required, President Trump can revert to his prior declassification order.

This apparent behind-the-scenes negotiating appears to be in regard to managing the damage done to our institutions—and our allies—as a result of the actions under the previous administration.

Personally, I’m in favor of full disclosure now—and let the chips fall where they may.

But I also understand the power of leverage. Despite the disappointment sure to be expressed by many, President Trump is currently holding a position of significant leverage over all of those involved—including Britain and Australia.

Ask yourself a simple question: Which avenue proves more powerful in manners of public persuasion—a forced declassification of a specified set of documents by Trump, or an honest and damning report issued by an independent inspector general who was nominated by President Barack Obama?

President Trump has made the decision that a better course is to allow IG Horowitz to manage the information disclosure. If this is not done to President Trump’s satisfaction, well, my guess is all bets are off.

In the meantime, my expectation is that the release of the Inspector General’s report just got significantly accelerated.