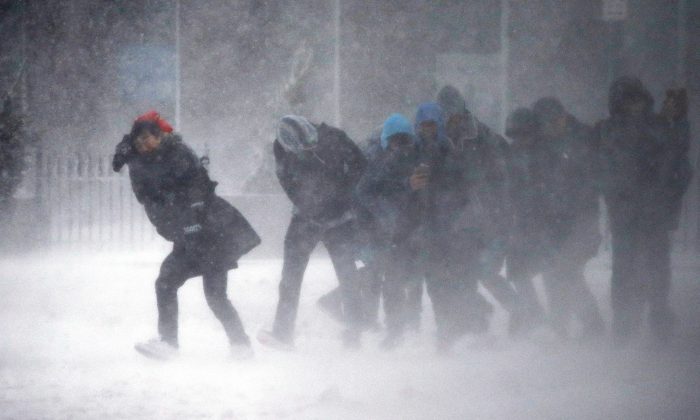 People struggle to walk in the blowing snow during a winter storm Tuesday, March 14, 2017, in Boston. (AP Photo/Michael Dwyer)
Environment

The Art of Perfect Storm Prediction

NEW YORK—Swirling across the Northeast on March 14, Stella was a textbook winter storm. Five days in advance, meteorologists saw it coming as two storms, one in the Midwest and one in Southeast, set on collision course.

The storms didn’t actually run into one another. As the Midwestern storm rotated, it spurred on the Southeastern one, making it “extremely powerful in a matter of hours,” said Keith Seitter, executive director of the American Meteorological Society. “That’s kind of the classic setup for a really strong nor’easter.”

Yet when Stella came to the northeast, instead of dumping the predicted foot of snow in New York City, it sprinkled just seven inches on the city, and two feet in parts of Pennsylvania.

The dividing line between a sprinkle of snow and a pile of snow can be as thin as a few miles.

Forecasting winter storms is one of the trickiest tasks for a meteorologist. Especially along the coast. “Very tiny shifts [in the storm movement] can make an enormous difference,” Seitter said.

Because the ocean’s temperature stays above freezing even during winter, it warms up the air, often resulting in rain and sleet closer to the coast and snow further inland.

And there’s a big difference between rain and snow—with the right temperatures, one inch of rain falls as 10 inches of snow.

As the storm moves along the coast, the dividing line between a sprinkle of snow and a pile of snow can be as thin as a few miles, Seitter said.

If Stella had moved 10 to 20 miles further inland, perhaps New York City would have seen a foot of snow. And because large storms have large impacts, preparation has to be tailored to the worst-case scenario.

Moreover, predicting storms involves a dash of alchemy. There’s not one but actually multiple computer models meteorologists must use together to come up with the best forecast, said Jeff Freedman, in a previous interview. Freedman is research associate at the Atmospheric Sciences Research Center of the State University of New York in Albany.

Some models are good at predicting how a particular storm will behave. Other models may be better at predicting how much rain the storm will deliver. Meteorologists constantly upgrade the models, develop new ones, and look at how each has been performing over the past weeks. Then they settle on the right mix.

“There’s a little bit of art in there I suppose,” Freedman said.