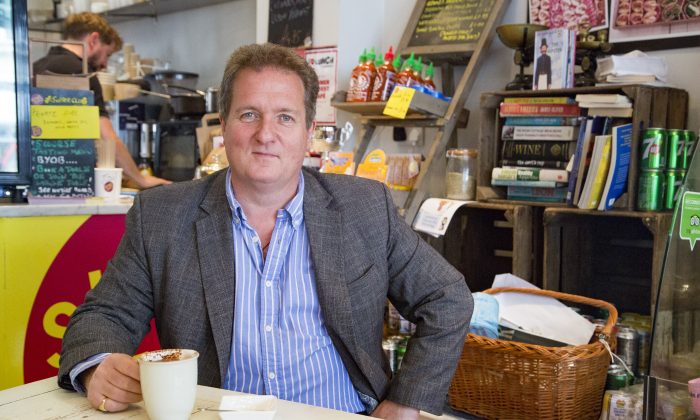 The Art of Networking and Coffee Chats

LONDON—Simon Burckhardt and his business partner, Jon Collinson, sat in commiseration at an upmarket restaurant in Cannes, France. They had lost hope. It was 2003. Three months in from starting their consultancy business, they decided to promote themselves at the annual Mobile World Congress – the world’s largest trade show for the phone industry. Burckhardt had previously worked for large companies in the phone industry, but this time there were no luxuries involved: they took Easyjet flights to Italy to save costs, hired the cheapest car possible, drove 100 miles over the border to France, and stayed in a “very functional” motel 50 miles from the conference venue.

At the conference, Burckhardt and Collinson networked and met new people but nothing came out of it. They had no leads. Disappointed, they treated themselves to a nice meal in Cannes, ordering a ridiculously expensive piece of fish that nearly bankrupted their business.

As they sat out in the French sunshine relishing their restaurant meal, Collinson’s ex-colleague walked past, sat down, and got chatting. He was interested in their business. “Come and see me,” he said. And through that they got £50,000 worth of business.

“If we hadn’t been sitting in that restaurant, giving him the impression that we were doing well, he might not have had the confidence to say: ‘Come and see me’. If we hadn’t been there we wouldn’t have signed the contract,” reflected Burckhardt with a smile. “Of course we didn’t tell him we were staying in a completely functional hotel.”

They had made their business seem bigger than it was – by accident.

Burckhardt is now director for the UK branch of Vonage, a US based company founded in 2001 that provides cloud communications services for businesses and consumers. One of the company’s target markets is start ups and small businesses. He knows exactly what it’s like to be a start-up.

There is a record of around 5.2 million businesses in the UK, an increase of 760,000 since 2010. Around 75 per cent of these are one-man bands according to a 2015 report by Lord Young, enterprise adviser to the prime minister.

“I think for the majority of those people it’s hugely liberating and a vibrant thing for them to do,” said Burckhardt.

One of the services Vonage provides to businesses is the choice to connect their phone line to any area code in the UK. If an organisation’s team work remotely and can’t afford an office space in London, their phone numbers could still use a London area code.

Technology has been one of the biggest game changers for small businesses. Burckhardt gives an example of a stamp collector. He had a shop and some brochures that he sent out via snail mail, then people ordered from him. Once he set up a website, he went from having a market 200 miles from his shop to the whole world. Suddenly anybody and everybody who wanted to buy a stamp could order from him.

While technology has its conveniences, Burckhardt stresses that face to face networking is just as important in the digital age.

Above all, relentless networking is the key thing that will help make your small business successful, says Burckhardt.

While it is crucial to think about the infrastructure, the office, the number of employees and the marketing materials, there needs to be someone on the ground networking all the time, he said.

“I’ve worked with quite a few businesses who spend hours working their brochures, trying to get them beautiful, working out what their brand’s going to be, having their employment strategy set up, and I remember saying to them, ‘When are you going to get your revenue in?’ ‘Oh we haven’t started that yet, you know …’ Lo and behold they fold six months later because they’ve spent all this money and nothing’s coming in. Companies do that,” he said.

He recommends small business owners to see every person they can – because often business can come when you least expect it. Burckhardt would fill his days with coffees and half-an-hour chats on the 5th floor at Waterstones in Piccadilly.

“You don’t say you are going to sell them something, you just say you want to have a chat,” he said.

As we chatted over lattes in Street Eats cafe in Hammersmith, Burckhardt remarked on the good coffee.

“Twenty years ago you wouldn’t get a decent cup of coffee in London, it was really different. You wouldn’t have places like this in Hammersmith. That has changed a lot,” he said.

Burckhardt has had an international career in the mobile industry. From the Czech Republic, to Moscow, the Middle East, and the Philippines, he has led an expat life, using his weekends to visit his wife and children in London.

“That expat life, you lose your roots a bit. You make friends in a particular country, and there will be another expat or two. For the first three or four months it’s fantastic because you’ve suddenly got these close friends. Your choice is to go home and sit in an apartment by yourself or go out – you’d go out. It’s great, but you don’t really put down any proper roots.”

He noticed a difference when he settled back in London in 2012 for the long term; he felt the city had become more vibrant.

“I love the multicultural mix of the community. It’s a great place to be a young person, there’s so much opportunity,” said Burckhardt, who has four children aged 16 to 25.

“The weather could be better and the house prices could be cheaper, and the Tube could be a little less crowded, other than those things, I think there’s a real buzz about it, a more exciting buzz, a more exciting place than 15 years ago,” he said.

10 tips to get the most out of networking