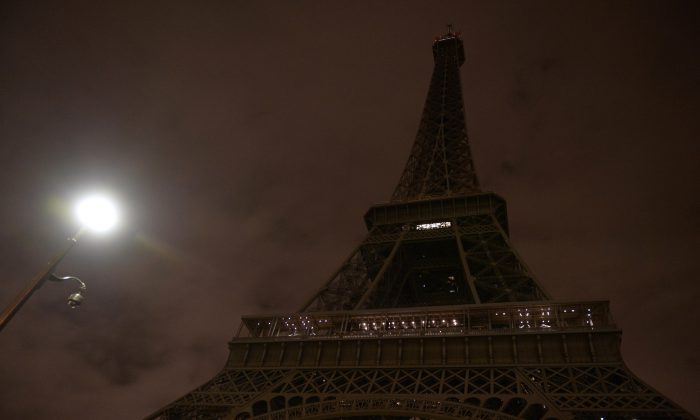 The Eiffel Tower with its lights turned off following the deadly attacks in Paris on Nov. 14, 2015. (Alain Jocard/AFP/Getty Images)
Europe

By Shelley B. Blank

As a preface to a discussion about the arms industry today, is an interview with Jerry Benoit Papon, MD, FACEP, ACEP spokesperson (American College of Emergency Physicians), who was on duty in the emergency ward the night of the terrorist attacks on Paris, the weekend of Nov. 24. Dr. Papon is assistant professor of Emergency Medicine at American Hospital of Paris, France. He is the former head of the Emergency Department Weill Medical College of Cornell University.

SBB: What have been the physical effects on the human body of bullets fired into an unarmed crowd?

JBP: Easy to imagine, the most obvious wound was to the chest, belly, head, face, limbs. The main trouble that the EMS teams from the fire dept or the ER docs from the Pre Hospital Intensive Care Unit have had to face was stay and wait until the police give them authorization to enter the war zone! It’s a very painful situation for ER staff be there and remain inactive.

Then, they’ve got very heavy injured patients needing to go straight to the OR and ICU. The closest hospitals saw 40 patients arriving all together on gurneys, in a spontaneous waiting line! Fire department ACLS [advanced cardiac life support] ambulances trapped in traffic jam in the hospital ambulance bay.

The Triage Area was swamped, ER docs, intensivists and anesthesiologists, orthopedic and visceral surgeons, as well as the CT-scan radiologist were rapidly overwhelmed. As usual, patients were stabilized and under strong IV morphine or on deep sedation to allow for the stopping of hemorrhaging. The most relevant information to take out of this tragic event is about nurses and physicians going spontaneously to the hospital to help.

SBB: What has been the mental effects on the human mind?

JBP: Easy to imagine, too, patients are at first paralyzed by the urgent trauma and the ones who can walk follow the rescuers quietly and mostly remain silent. Then, all of them were under the care of the physicians and psychologist or psychiatrist, to help them to give a primary description to what they’ve had to cope with. The French EMS system has special teams to support the injured people and their relatives (Cellule Medico Psycologique), but this is just the first step of care.

SBB: What have been the effects on the treating physicians?

JBP: All of them were heroic, and as I said the hospital Emergency Departments have seen the spontaneous arrival of physicians ready to give a hand, even if they don’t know the premises or how to help. They’re very useful to assist or to register or to call family members of the injured.

A lot of them were exhausted and felt sad and choked because they’ve had to cope with war wounds and lot of the victims were young (especially the one at the Bataclan). But at the end, they feel satisfied because provided did the best care they can give.

The most difficult for the first responders was frustration because they cannot save many lives due to the no man’s land area to check that there is no more risk for the EMS staff. The dispatching of the victims was not easy due to the blackout on cell phone frequencies to prevent another bombing on the site.

This is usually one of the strengths of the French EMS system, dispatching the patient to the most appropriate hospital with a surgical or intensive care team ready to take care of the patient.

The passport to hell is your wallet.

The arms industry is one of the most profitable and powerful industries that has existed on this planet.

According to the Stockholm International Peace Research Institute (SIPRI), each year, over $1.5 trillion is spent on military expenditures worldwide (2.7 percent of world GDP). This theoretically private industry has an annual income of $400 billion. It is a crossover industry, frequently overpowering governments and government policies as a global business with almost unrestricted profits that are used to make it virtually unaccountable and unregulated by any realistic government oversight.

This may possibly have to do with the fact that the huge profits from manufacturing weapons, military technology, and related research has formed a corrupt and very lucrative bond between politics and the arms business. It was forewarned by what U.S. President Dwight D. Eisenhower described in 1961 as a “Congressional military-industrial complex,” where armed forces, commerce, and politics become inseparably linked, forming a profit-driven pseudo-government whose interests are sales and marketing: marketing war to create arms sales.

Who is selling these arms and ammunition to ISIS, and how do they get to them?

The International Defense Industry Fair (IDEF), organized by the Turkish Armed Forces Foundation, has been held in Turkey every two years since 1993. At IDEF 2011 in Istanbul, there were 435 delegation members, including 22 ministers, 4 chiefs of general staff, 2 force commanders, 8 deputy chiefs of general staff, and 11 undersecretaries, from 73 countries and one international organization; 633 companies (212 domestic and 421 foreign) from 46 countries; 52,502 visitors, and 244 journalists.

According to SIPRI’s research regarding the volume of international transfers of major weapons, the five biggest exporters in 2014 were the United States, Russia, China, Germany, and France, biggest importers were India, Saudi Arabia, China, the United Arab Emirates, and Pakistan.

The five most powerful weapons manufacturers in the world are as follows:

It receives 74 percent of its revenue from producing military equipment, including technology and weapons sales. It created the F-22 Raptor fighter jet, one of the world’s most advanced stealth fighter jets available. In 1998, Lockheed Martin started an $8.3 billion takeover of Northrup Grumman, but had to abandon the offer due to government concern over monopoly power.

Although best known for producing commercial airliners, Boeing actually gets 45 percent of its income from producing military jets and weapons.

Located in London and created in 1999 as a merger of two defense companies (Marconi Electronic Systems and British Aerospace), BAE Systems manufactures the M777 howitzer and various light artillery models.

Raytheon was founded in 1922 by Vannevar Bush, who played a vital part in convincing the U.S. government to develop and expand atomic weapons. Inventor of “memex,” in 1945, in which he describes the first automated information management system, which foresaw the Internet. Bush promoted a closer relationship joining government, science, and industry, thus helping increase the Congressional military-industrial complex significantly (more about him and that in next week’s edition). Headquartered in Cambridge, Mass., it is the world’s largest producer of guided missiles, including the Patriot missile. In 2014, it won a $1 billion contract to develop long-rang radar technology for the U.S. Air Force.

An American defense technology company headquartered in San Francisco, Calif., Northrup Grumman employs 69,000 people worldwide. It produces surveillance and electronic equipment and manufactures the deadly B-2 Spirit strategic bomber. In 1999, it lost a government suit and was ordered to pay $325 million to the U.S. Navy for knowingly selling the Navy defective aircraft.

The arms industry does not a have right or wrong side: its goal is the constancy of war.

The Stockholm International Peace Research Institute said in its annual report: “Businesses or governments in at least 26 countries have sold weapons to both sides in the Iran-Iraq War. … Since the last Iran-Iraq War survey two years ago, 17 countries joined the list of those selling weapons to both sides, including Sweden, Britain, South Africa, and the Netherlands. The United States and the Soviet Union were among those on the 1984 list.”

ISIS stands for “Islamic State” but does not represent the people of the Muslim faith. ISIS is an extremist militant group that rules by Wahhabi/Salafi law. In Arabic, the group is also known as Daesh.

An example of ISIS is the terrorist group that is known for kidnapping Western journalists and aid workers.

ISIS’s supply lines extend from NATO-member Turkey to the southwest into U.S. allies Jordan and Saudi Arabia. Germany’s international broadcaster Deutsche Welle (DW) published the first video report from a major Western media outlet illustrating that ISIS is supplied with billions of dollars worth of supplies carried into Syria across NATO member Turkey’s borders via several hundreds of trucks a day.

Will This Violence Ever End?

If more violence is your answer, your question will be unending.

If war is your answer, your question might be denied.

If military response is your answer, your question is out of your hands.

If more military spending is your answer, you have bankrupted your question.

If your question is: How do these violent movements get started?

If we can ask the basic questions, shall we consider that violence may be the symptom of the disease of poverty? The poverty of perceived exploitation, the poverty of inherited violence, the violence of being uneducated, undernourished, unemployed, and unable to find a decent, safe and respectable place in a decent and responsible society?

Then there are answers to be had, without question.