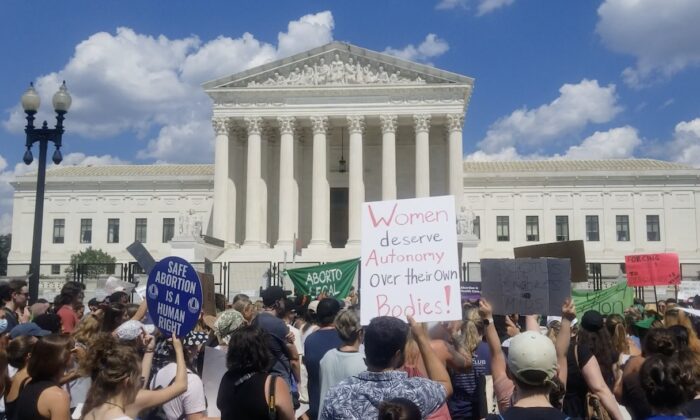 Protesters gather outside Supreme Court in a rally against the June 24 decision that repealed the 1973 Roe v. Wade ruling, in Washington, on June 25, 2022. (Nathan Worcester/The Epoch Times)
Viewpoints

The Left will fight against geographic voter shifts after Roe v. Wade

Roe v. Wade has been overturned. This has rightfully been highlighted as one of the most monumental developments of our lifetime.

That is because the case hits at the very nexus of forces that define the American national identity: social, political, legal jurisprudence, economic, and even spiritual. It causes us to wrestle with the foundational questions of what it means to be a citizen of the United States.

The implications of the vastly different ways in which we answer these questions reverberate throughout all aspects of our public life.

That’s not hyperbole; the decision to scrap Roe has already had the expected effect of further dividing the American populace into separate and seemingly irreconcilable camps. The fact of the matter is that citizens of this country have been drifting further apart for some time. This reality will not come as a revelation to anyone who has been out in the world recently (or spent time on Twitter); however, this case truly does have the potential to be an inflection point for our future shared—or unshared—course as a nation.

An increasingly polarized political environment is a reflection of our more fundamental disagreements. We no longer embrace the same traditions, values, or historical identity. We look to shop at outlets that agree with our ostensible moral codes. We don’t watch the same movies or shows. We purchase different products and services, depending on the causes they claim to support. Sports, once a reliable redoubt—last resort, even—of national unity, have also been imbued with the culture wars.

Overturning Roe will be sure to exacerbate these trends. It’s hard to say how much, but as mentioned above, we should not underestimate its potential to further deepen the already existing fault lines.

There are many avenues through which this process may play out, but one of the most important will be the possibility for citizens to “vote with their feet.” Abortion has become a sacred cow for liberal progressives, and many could begin to seek a geographic realignment after the court’s decision. This, however, is not necessarily a bad thing.

Blue (Democrat-controlled) urban areas in otherwise red (Republican) states have always been liberal strongholds. The true “geographic divide” in 21st century America has more to do with urban versus rural than North versus South.

The cosmopolitan mindset that reigns supreme in cities is usually opposed to the sentiments of national pride or reverence for tradition that are more common in the countryside. An average resident of Atlanta will likely find their values to be closer to those of someone from Los Angeles rather than a fellow Georgian from a small town 20 miles away. At the same time, a farmer from upstate New York would almost certainly be more comfortable conversing with a Midwest cattle herder than a suburbanite from nearby Westchester County.

The principles of federalism will once again determine the legal status of abortion. Most conservative state legislatures will now have the ability to enact statewide restrictive abortion policies. Progressive city councils and local governance structures may very well try to resist the imposition of pro-life policy through some form of “nullification.”

Then it becomes a question of whether Republican governors will do what is necessary to carry out their executive functions (for example, enforcing the law as legislated by the people’s chosen representatives). If they do, there will likely be a large exodus of left-leaning citizens from these states.

However, the general shift in voter demographics won’t be in one direction only. Liberal drain from red state cities could also facilitate the opposite reaction—conservatives in blue states fleeing their ultra-progressive local jurisdictions.

A growing proportion of Democrat to Republican voters means that the latter has an increasingly smaller say in state-level politics. As right-leaning residents of Democrat-controlled states find that their votes are becoming largely inconsequential due to the influx of progressive asylum seekers, many may consider moving to one of the new burgeoning conservative oases.

Shifting voter demographics will begin a cascade of policy changes that will grow exponentially. More homogenous ideological affiliations will ripple throughout the entire elective process. Mayors, local school boards, county commissioners, and the like will find themselves closely aligned on the central issues of our era. This goes far beyond abortion.

Consider just a few of the following.

Will we accept or reject critical race theory (CRT) in our public-school curriculum?

Will we teach the full scope of the great American story, with all of its good and bad, explaining its history as an unfolding process that’s inevitably imperfect due to human agency?

Or will we argue that our country is fundamentally flawed at its core, that racism is the central organizing principle of everything, that the fallibility of our human founders negates any of its purported principles, and that the only acceptable recourse is to tear down our existing institutions and rebuild them with our new, enlightened worldview?

Will we decide, like Florida, that subjecting young children to inherently sexual topics and spreading radical new gender ideology (the long-term impact of which we have not even remotely begun to understand) should be illegal?

Could conservative legislatures go further and decide that the introduction of drag queens, and explicitly sexual acts, to any type of performance directed at children, should be outlawed?

Conversely, couldn’t an overwhelmingly progressive school board, with the support of liberal parents, argue that exposing every child to drag is actually a moral imperative to facilitate the development of a truly “inclusive and accepting” citizenry?

And what about the “public forum” and the increasing amounts of online censorship?

The intricacies of Big Tech censorship and the first amendment go beyond the scope of this article. But isn’t it possible that increasingly uniform state governments will have a strengthened ability to tangibly weigh in on the issue?

Red states would likely look to tie policy regarding online speech and diverse viewpoints to the standard set by the First Amendment. Contrary to this, could a concerted effort to enshrine codes that ban “hate speech” be put forward by Democrat-run states?

What about an initiative to ban certain types of medical information deemed contrary to the “accepted consensus of the scientific community?”

The truth is that these are all difficult questions, and their answers will largely be determined by the politics and values of the respondent. Making the citizen, through the act of electing representatives, the one who is once again responsible for doing the answering is the central premise of the American way of life.

The return to federalism that is suggested by the overturning of Roe is an exciting development. The United States was built on the proposition that no government is legitimate without the consent of its citizenry. The enactment of federal abortion law by a centralized national government and entrenched bureaucracy makes “consent” into an abstract term that has no actual bearing in our lives.

We now have the opportunity to reclaim that fundamental right (this conception of a right that was present at the American founding is very different than that which pro-choice advocates purport to fight for). The overturning of Roe may help to initiate a geographic realignment that will make the exercise of this right more feasible. As we congregate into communities that share our values and beliefs, the public weal may once again become a real concept.

Consent of the governed is the antithesis of centralized power, and so the latter is already doing everything it can to fight against the reemergence of the former. A divided and angry populace is necessary to retain tyrannical control. The centers of the most concentrated, anti-American, and inhumane forces are working to keep the citizenry dispersed and hateful.

Large companies, business conglomerates, and Big Tech have already stated their intention to make sure that abortion is available to their employees, wherever they may live. “Sanctuary states” are promising to cover the travel costs for those citizens stuck in red states to travel for the procedure. Bureaucratic institutions of the federal government, such as the Department Of Defense, have already stated that they will protect the ability to have an abortion for its employees wherever they may be.

These anti-democratic bodies desperately want to keep like-minded, anti-authoritarian people in this country from congregating. Despite the lies they tell, including those coming from the White House, unity cannot be imposed from the top down. It grows organically from the grassroots. In order to fight this, they seek to sow the seeds of division that keep the population warring with one another instead of challenging their authority.

The history of overturning Roe v. Wade has taught us that we still have the ability to fight back against this tyrannical overreach. It begins with the courage to reclaim what was already ours, to begin with.