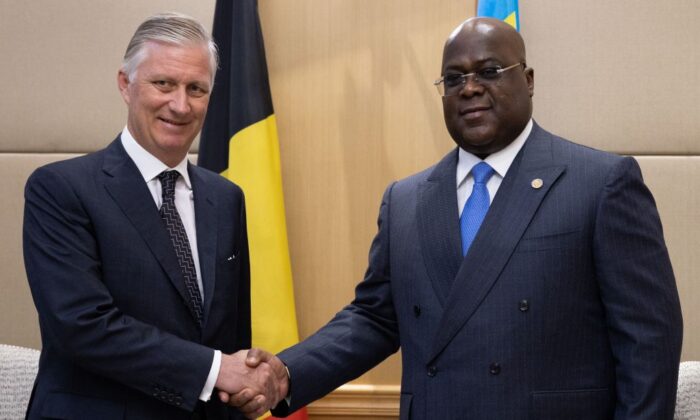 King Philippe of Belgium and DRC Congo President Felix Tshisekedi pictured during a meeting at the Palais de la Nation, in Kinshasa, during an official visit of the Belgian Royal couple to the Democratic Republic of Congo, on June 8, 2022. (Benoit Doppagne/Belga Mag/AFP via Getty Images)
Viewpoints

The Apology Dilemma: Belgian King’s Controversial Visit to the Democratic Republic of Congo

The King of Belgium Philippe, recently visited the Democratic Republic of Congo (DRC), previously known as Zaire. It is the first time that the King, who ascended the throne in 2013, visited the country. He was accompanied by his wife, Queen Mathilde, and the Belgian Prime Minister Alexander De Croo.

Philippe is a descendant of King Leopold II, who, following work by explorer Henry Morton Stanley, seized this sizable African landmass in 1885 and established the Congo Free State as a personal fiefdom. He ruled the Congo Free State until 1908 when it was turned into a colony of Belgium—the Belgian Congo—until independence in 1960.

King Leopold II notoriously treated the Congolese people brutally, plundering the resources of the country while enriching himself. According to estimates, he made more than one billion dollars (in today’s money) from his exploitation of the country—despite never setting foot there himself.

The King also employed Congolese in extensive rubber plantations, and amputated the hands and legs of workers unable to meet their quotas.

Commentators speculate that about half the Congolese population perished from punishment or malnutrition. By the time the King died on Dec. 17, 1909, Leopold II’s atrocious human rights violation were well documented, and his reputation ruined. Crowds of Belgian spectators booed his funeral cortege.

Yet, for many decades after his death, Leopold II was officially revered as a great King who gave Belgium an empire. He was honoured by various foreign governments and even the more recent King Baudouin of Belgium who referred to his as a “genius.”

Until about a decade ago, history books in Belgian schools glossed over the terrible atrocities committed in the name of King Leopold II. And statues to celebrate the “achievements” of the King were erected throughout Belgium.

However, since the killing of George Floyd in Minnesota in 2020, statues of Leopold II have been vandalised and a few have been removed by local councils. Also, the country’s Parliament established a committee to consider the history of Belgium’s colonisation project in the Congo with a report due later this year.

However, King Philippe’s recent visit to the DRC attracts controversy because he has yet to apologise for the inhumane and degrading treatment of the Congolese people.

In 2020, he expressed “deep regret” for the suffering and discriminatory treatment of the Congolese, and the atrocities committed during the reign of Leopold II. However, his statement of regret never amounted to an official apology.

During his June 2022 visit, King Philippe returned a traditional initiation mask of the Suku people, who inhabited the south-western part of DRC. The mask had been on display in Belgium’s Royal Museum for Central Africa in Brussels, and it will now be on “indefinite loan” to DRC—a loan gratefully accepted by DRC’s President Felix Tshisekedi.

When returning the mask, the King said, “It marks the symbolic beginning of the reinforcement of the cultural collaboration between Belgium and Congo.”

However, Philippe’s expressions of “deepest regret” do not constitute an official and formal apology; it does not even go further than his first expressions of regret in 2020.

DRC’s expectation, or hope, that King Philippe would give an apology during his address to the Parliament of the DRC gives cause for reflection.

If the King had offered a formal apology, he would have apologised for the horrific atrocities for which his ancestor was responsible and potentially exposing his family to compensation demands.

And going forward, would it even be possible to find the citizens of Belgium and descendants of King Leopold II directly responsible for human rights abuses?

Many Belgians in the administration of the Belgian Congo were able to benefit from being a coloniser. But it would be difficult to establish a link between living Belgians and the atrocities in the Congo which occurred decades ago.

To hold the current Belgian polity responsible would also invalidate the principle that only those who have inflicted misery on the Congolese should be held to account for the atrocities.

Regardless, even if an apology is not forthcoming, the visit should still lead to an improvement of the relationship between Belgium and DRC, rekindling economic and cultural ties which are capable, eventually, to erase any bitterness still felt in the DRC.

For now, an official apology will be a bridge too far.